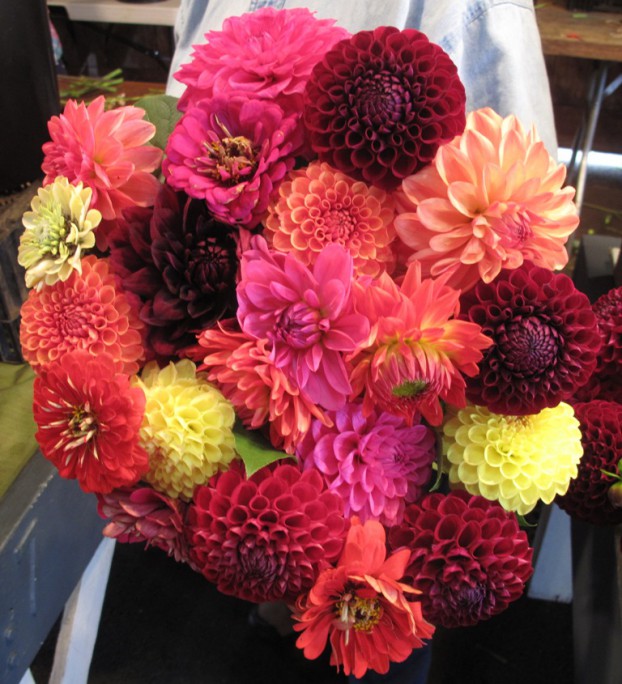 The vivid “hot” bouquet that I brought home with me today – $10 by JoAnn Mahaffey, who works for Dan’s Dahlias booth. 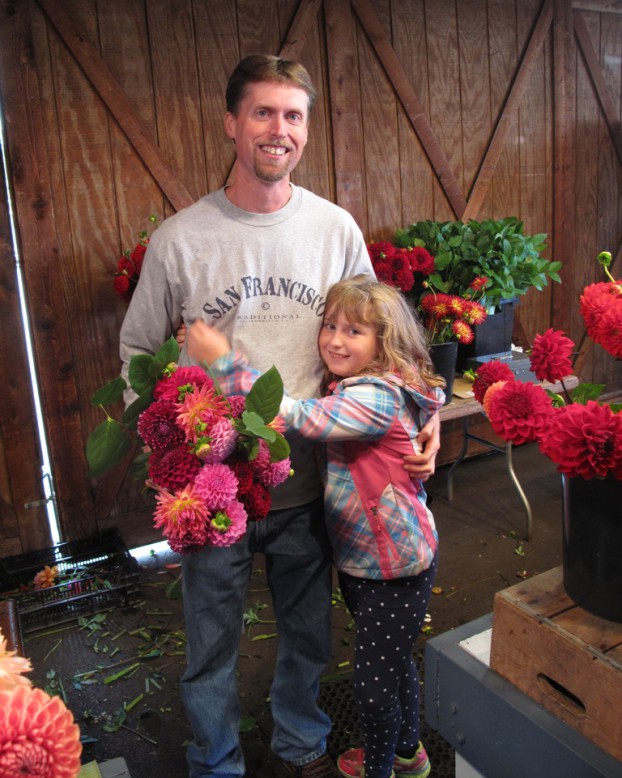 Dan Pearson of Dan’s Dahlias, with his 8-yr-old daughter Alyssa.

This morning, bright and early, we drove to the Olympia Farmers’ Market to shop for dahlias.

Yes, there are dahlias available closer to me in Seattle, but I wanted to see what dahlia farmer Dan Pearson was up to at this market. You see, he is nearly 41 years old and he has been growing and selling dahlias at this market for 31 years.

YES, you read that correctly. Dan’s Dahlias is a long-established cut flower farms that so many others emulate. The Olympian newspaper recently called him the “Dahli Lama of cut flower growers” in this story.

In the winter and spring, Dan runs his very successful online Dahlia Tuber store (and PS, I find his web to be user-friendly with easy searches by petal color, flower size, and may other variables).

In the summer and fall, he sells cut dahlias to loyal customers at the Olympia Farmers’ Market and to the floral community through the Seattle Wholesale Growers Market.

I’ve known Dan personally for the past three years, but anyone who shops at the Northwest Flower & Garden Show or the San Francisco Flower & Garden Show has been drawn into the colorful and highly organized Dan’s Dahlia booth – where you see gorgeous photos of hundreds of dahlia varieties, each one aligned with pre-bagged tubers to take home and grow yourself. 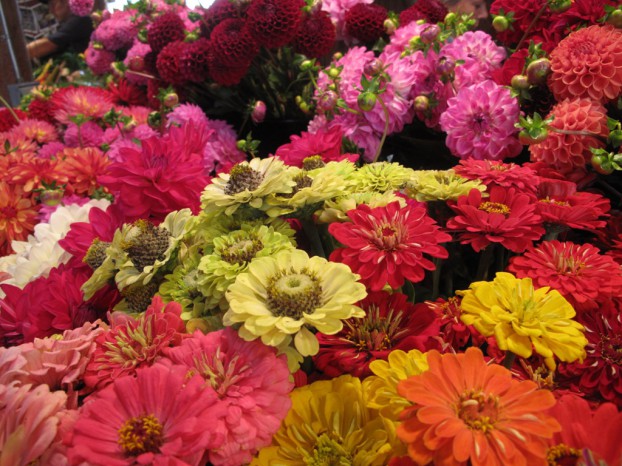 Add in a few zinnias and you have an incredibly eye-pleasing floral palette.

Just wanted to share these luscious photos as they represent just a small portion of the incredible variety of forms and colors available from Dan. And here’s a story I wrote about Dan for Pacific Horticulture magazine – from 2012: 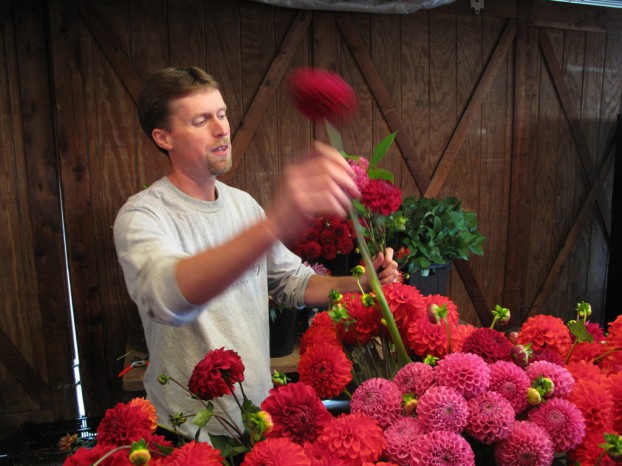 You might say Dan Pearson is a poster child for the young farmers’ movement. Except that he started earlier than most of his contemporaries, growing and selling one-dollar bunches of dazzling red, pink, orange, and purple dahlias to customers who drove past the family dairy farm in Oakville, Washington, when he was just ten.

Sales of the alluring flower eventually put Dan through college and set the course of his career.

Why are we wooed by dahlias? Perhaps it’s their amazing diversity in color, form, petal shape and size, Dan speculates, a grin spreading across his face. “They vary in size from less than two inches to ten inches. People are drawn to those dinner-plate-sized flowers for the wow factor, but soon they realize that the smaller to medium-sized flowers are useful for bouquets.”

As a boy, Dan demonstrated his affection for the flowers that his father, Clarence Pearson, planted along the edge of the vegetable garden by memorizing the names of more than 30 varieties. In 1984, when he was 11, Dan’s folks helped him open a flower stall at the Olympia Farmers Market. “My mother, Colleen, hand-painted a sign that simply read Dan’s Dahlias,” he recalls. 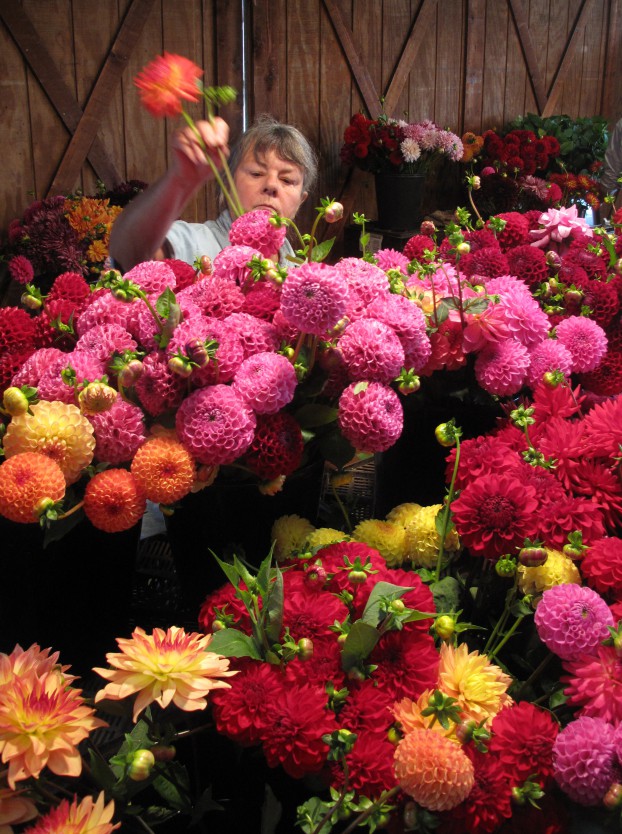 Today, if he’s not harvesting flowers from more than 600 varieties of luscious dahlias, you can still find Dan at the Olympia Farmers Market, Thursday through Sunday. His bunches of dahlias mixed with summer annuals go for the bargain price of $9, satisfying an endless stream of regulars and market visitors. Dan likes this market’s philosophy, which mandates that all farm products must be locally grown within a five-county area. Operating year-round, it is the state’s second-largest after Seattle’s famed Pike Place Market. 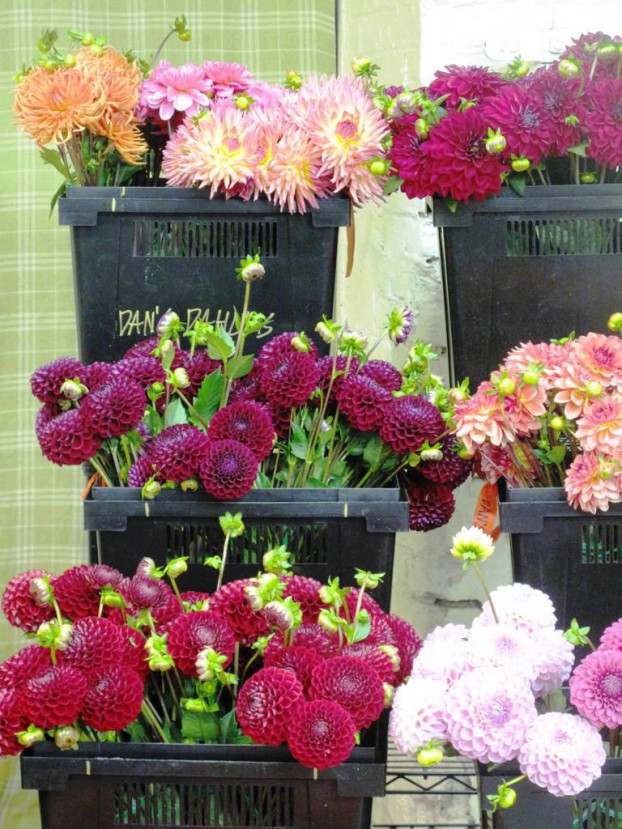 Dan Pearson’ Washington-grown dahlias on display at the Seattle Wholesale Growers’ Market — from farmer to florist.

A lot has been written about young farmers and the growth of America’s small family farm. The U.S. Department of Agriculture recently began documenting this demographic, in recognition of the increasing ranks of young women and men who are leaving cities for a rural life on the land. Earlier this year, the USDA’s Farm Service Agency announced a nationwide drive to recruit up to 100,000 new farmers with resources including a “Start2Farm” web site, as well as farm loans and grant programs.

Dan is atypical, however, in that he’s not an urban escapee, but a fourth-generation farmer. He was raised by educators who also ran an 80-acre dairy farm in Washington’s Grays Harbor County, southwest of Olympia. 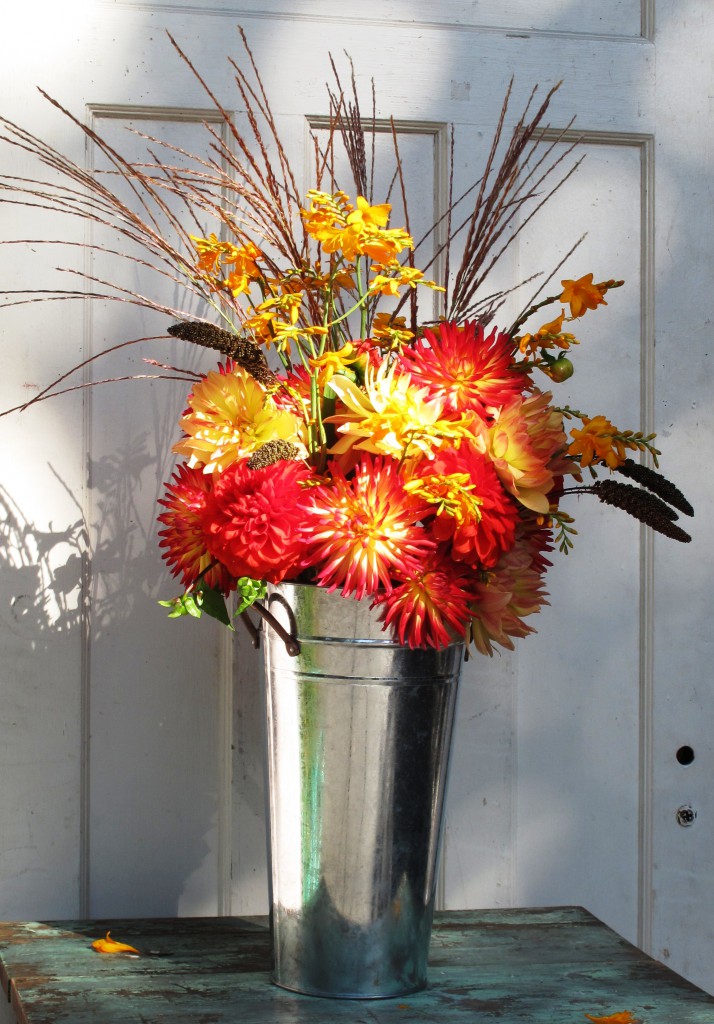 This lovely mix of gold, orange and red dahlias was a gift from Dan when I was working on “Slow Flowers,” the book. I added fountain grass, crocosmia and millet to the bouquet. 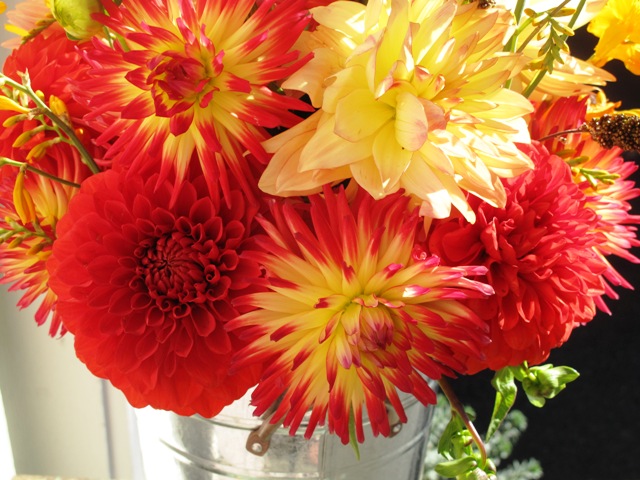 The season for dahlias is almost over, but these vivid selections are a reminder of how much we LOVE this amazing flower.

“My great-grandfather and grandfather were both loggers and dairy farmers,” Dan says. “My father was a dairy farmer and a teacher. My children are the first in our family not raised on a dairy farm. I have fond memories of the experience of growing up on a dairy farm but eventually the transition to a different livelihood had to be made. I have no regrets about transitioning my family to raising dahlia flowers and bulbs. This area is where I chose to raise my family, and I hope if there are the economic means, my children can do the same.”

Encouraged to attend college, Dan earned a landscape architecture degree from Washington State University. Then he spent seven years on the staff of a large architecture-engineering firm in Olympia.

“But I like to grow things,” Dan explains, shoving his hands in his jean pockets and gazing out across four acres of land where in late July (thanks to a wet, cold spring), the first dahlia buds were only starting to open—a few weeks behind schedule. “Even when I was working as a landscape architect, I was growing dahlias on my evenings and weekends–getting my hands in the dirt.”

In 2002, Dan’s dahlia business was so demanding he quit his landscape architecture practice. The timing coincided with marrying his wife Mieke (“a woman from the city who’s moderated my workaholism,” he contends). It also took place as the Internet began to explode, allowing www.dansdahlias.com, Dan’s nascent web site, to reach a world of customers: gardeners, flower farmers, hobby growers, and members of the American Dahlia Society. Tubers represent 85 percent of his annual sales, while seasonal cut flower sales make up the balance.

With their two young children, Dan and Mieke live one mile from their growing fields. His farming practices are partly old-fashioned and partly modern. For example, Dan does nearly everything by hand with the help of a small, seasonal farm crew. He solves problems the way farmers have done for centuries, using a cash-free barter system when possible. Dan has expanded his dahlia plantings on two acres of his neighbor’s land in exchange for allowing the neighbor to harvest hay from his acreage that’s not suitable for dahlia crops.

When his flower production began to outpace farmers’ market capacity, Dan made a timely choice to join a collective of like-minded specialty cut flower growers in Oregon, Washington, and Alaska in 2011. More than a dozen growers formed the Seattle Wholesale Growers Market, a year-round, farmer-to-florist wholesale market in Seattle’s hip Georgetown neighborhood. There, in a turn-of-the-century brick warehouse near artist studios, bistros, and vintage furniture stores, the region’s healthiest, just-picked blooms bypass middlemen and are eagerly snatched up by florists, event and wedding planners, restaurants, supermarket floral buyers, and other design-savvy customers who value fresh, local, and sustainably grown flowers.

“The Seattle Wholesale Growers Market came along at the perfect time because it allows me an additional sales outlet,” Dan says. “I just acquired five more acres I’ll plant for Growers Market buyers.” 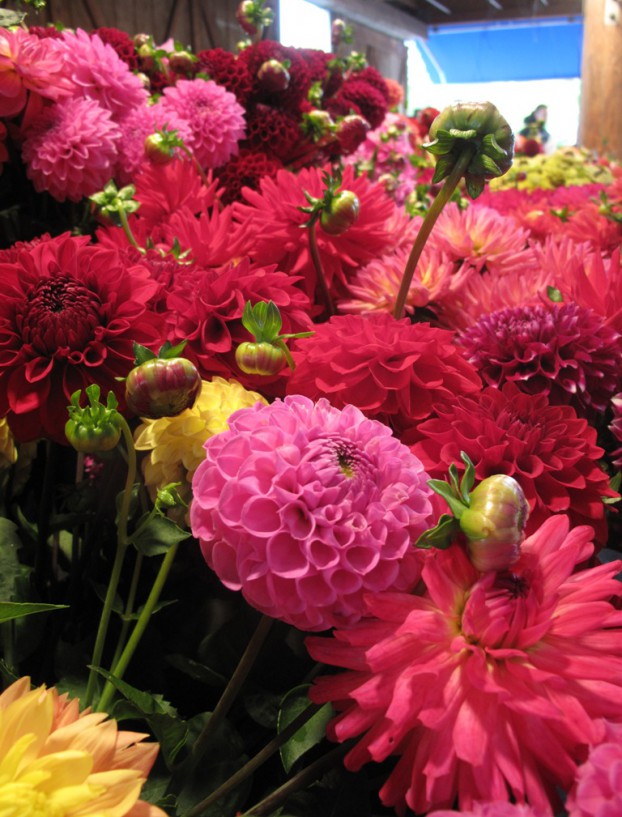 I can’t get enough of this gorgeous flower!

Plant details: Dahlia (Dahlia species and cultivars)
History: The dahlia originated in highland areas of Mexico and Central America. According to experts, centuries after cuttings were brought by plant explorers to Spain, the parentage of tens of thousands of today’s hybrids can be traced to those original plants. The dahlia is a member of the daisy family (Asteraceae). Dahlia tubers, potato-like clumps with an “eye” at one end, are actually modified stems that store nutrients and water underground while producing show-stopping blooms on tall, leafy stems.
Best features: Picture-perfect, symmetrical flowers feature subtle to intense colors in a wide array of forms. Flowers are formed by many petal-like “ray florets” arranged around a center of “disk florets.”
Hardiness: Zones 9-11 “Dahlias can be grown in all fifty states,” Dan says. Dan’s Dahlias ships tubers throughout the United States, as well as to customers in several overseas markets.
Conditions: Full sun, humus-rich, well-drained soil
Bloom time: Late summer to early fall; Dahlias are cut-and-come-again flowers that respond well to frequent harvesting.

This entry was posted on Sunday, September 28th, 2014 at 3:56 pm and is filed under American Grown, Blog Posts, Creativity, floral design, Gardening, General, Plants, Slow Flowers: 52 Weeks, Slowflowers.com the Directory of American Flowers, Writing. You can follow any responses to this entry through the RSS 2.0 feed. You can leave a response, or trackback from your own site.