A Seattle Sunday Morning: 43 degrees F. Foggy and damp. It’s supposed to get up to 53 degrees F this afternoon, so who am I to complain about a little morning fog?

I woke up grateful for many things, including the sense that my life has slowed down for this 30-day holiday period. I’ve purposely limited my social commitments so as to save my energy for the creative projects that are tugging at me. This afternoon, I might get the sewing machine out and see what I can fashion from my collection of pretty scraps and remnants.

One lovely suprise happened last night, just as I was about to turn off the back episode of “Madame Secretary” I was watching and crawl under the flannel sheets.

I’m hoping to get the audio posted, but right now, let me just say THANK YOU so much to Fran! What a generous gift of support from one serious flower lover to another. She gave me the transcript, which I’ll share here:

If you’re thinking about sending flowers to someone for the holidays, I’ve got a suggestion for you.

This is Fran Sorin for DIGGING DEEP.
A gardening colleague, Debra Prinzing, has singlehandedly created and committed her life to developing a nationwide online directory of florists, shops, and studios who design with American-grown flowers. It’s call Slow Flowers.
In the U.S., we spend close to $28 billion a year on floriculture. Around 80% of the cut flowers bought in the U.S. are imported.
The Slow Flower Movement is following the sustainable values of the Slow Food Movement—which is to buy local, lower the carbon footprint, enrich the local economy, and preserve local farmland.
To learn more and buy magnificent flowers from local American growers, click on slowflowers.com

This is Fran Sorin for CBS Radio News.

A lot like Fran’s unepected gift of a 1-minute endorsement heard on radios around the country, this next item also gets filed under the “out of the blue-gift from the universe” category.

In April 2013, I received an email from a stranger. Someone named Todd E. MacLean who just reached out with an invitation to get involved with a new book of essays entitled “Global Chorus.” Here’s what he wrote: 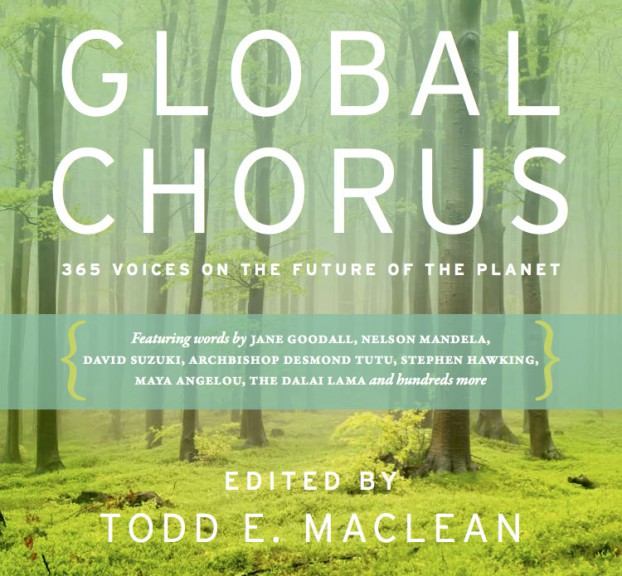 My name is Todd E. MacLean and I’m the Editor-in-Chief for an international fundraiser anthology that is currently being compiled called Global Chorus: A 365-Person Anthology of Worldwide Concern and Enduring Hope.

Global Chorus is a 365-day compendium, bringing together 365 contemporary voices and sharing in the experience and wisdom of many of humanity’s most concerned citizens. Contributors are asked to express their thoughts on the future of the planet, and the anthology will present a different contributor’s response for each day of the year. Proceeds from the sales of Global Chorus will go toward World Wildlife Fund, The Jane Goodall Institute, The David Suzuki Foundation and The International Committee of the Red Cross.

Contributors to Global Chorus have one page (suggested length of up to 250 words, to a maximum of 350 words) to answer the anthology’s question:

“Do you think that humanity can find a way past the current global environmental and social crises? Will we be able to create the conditions necessary for our own survival, as well as that of other species on the planet? What would these conditions look like? In summary, then, and in the plainest of terms, do we have hope, and can we do it?”

Something resonated with me about this project and I decided to say “YES.”

I used Todd’s invitation to bring flower farming and flowers into the dialogue about global environmental issues and the individual choices we make to respect the planet.

Todd helped me with a few edits and here is what ended up in the book, one of 365 essays (you can find mine on the page for October 19th). Learn more about Global Chorus and find a bookstore near you to purchase a copy. I’ll be giving these books as gifts this holiday season.

It feels daunting to think one person can change

things in this world. That is when I turn from the

macro to the micro and focus on individual action.

A single gesture takes on meaning far greater than

me, my family, my block, my neighbourhood, my

city. When that gesture is frequently repeated, its

I have always turned to flowers, those growing

in my garden and in the fields of my flower farmer

The symbolic gesture of giving flowers has

been practised for generations. Flowers appear in

history, in literature, in every culture and in every

land. Gathering flowers as a show of affection or a

celebratory display is no small thing. It is a timeless,

Flowers connect humans with Nature and

heighten our awareness of the seasons. They root

us to our place on the planet. Our senses see, smell,

touch (and even hear and taste) botanical beauty.

This is a truth understood by all humans.

I do believe that flowers parallel food. We don’t

often eat petals and buds, but they feed us nonetheless.

The spiritual sustenance of flowers has caused

me to think more intentionally about how I consume

them. I have been inspired to start the Slow

flowers grown close to me rather than ones shipped

to me from afar. When I choose local flowers, I am

As an advocate for those who grow flowers

enjoyed by so many, I believe it’s important to remember

and harvest those blooms. I find hope in honouring

the flower farmer, hearing his or her story and

into our lives. By making a simple connection between

flower and farmer we humanize an entire

industry, one that has previously been so disconnected

from us. It is perhaps more indirectly rather

than directly world changing, and yet, it is the act

I know makes a difference far beyond the vase on 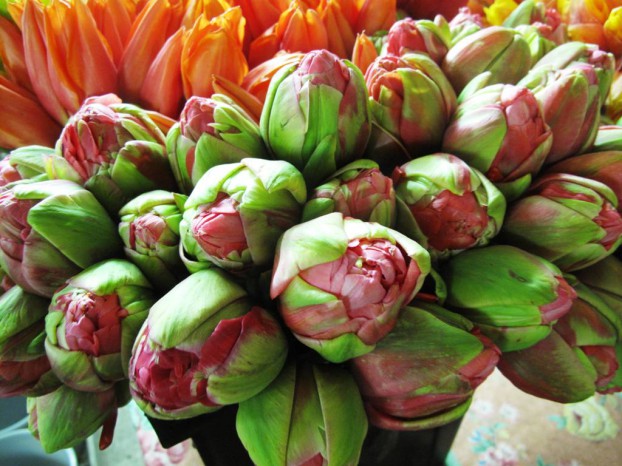 This entry was posted on Sunday, December 7th, 2014 at 10:04 am and is filed under American Grown, Blog Posts, Book reviews, Creativity, floral design, Gardening, General, Slowflowers.com the Directory of American Flowers, Spiritual Practices, Writing. You can follow any responses to this entry through the RSS 2.0 feed. You can leave a response, or trackback from your own site.

One Response to “A Quiet Sunday Morning”