As some of you may know, I’ve been working on a book about local and seasonal floral design for several years, since 2007 to be precise. My collaborator, photographer David Perry, and I have been using the working title, A Fresh Bouquet.

But that’s all changing now, with a new title from our new publisher, St. Lynn’s Press. The words evoke just the right idea we want to communicate: The 50 Mile Bouquet: Discovering the World of Local, Seasonal, Sustainable Flowers.

Nice, huh? Our publication date is April 2012 and I’ll be writing lots more news about it soon.

Since all I’m doing these days is interviewing flower farmers, eco-couture floral designers and gardeners who grow their own cut flowers, my head is swimming with beautiful blooms.

And somehow in all this flurry of work, I’ve failed to post the out-takes from my floral design story that ran a few months ago in Better Homes & Gardens. So today, I’m taking a moment to get to it. 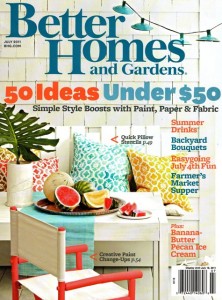 How great that 7.3 million readers of the July 2011 issue were introduced to the timeless notion of gathering flowers from the garden, a local farmer or a market stand – IN SEASON – and creating a simple, yet sumptuous arrangement that’s of the moment!

I have my editors Eric, Doug and Gayle to thank, because they believed in the idea and created the perfect opportunity for me to fly to Iowa and design a series of bouquets literally out in the field at Howell’s Family Farm.

I shared some of my on-the-scenes location photos last year, but here, finally, are my photos and recipes of the actual arrangements. 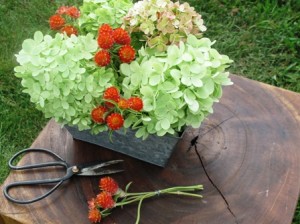 Project One features a rectangular galvanized container, measuring about 5-by-8 inches and about 5 inches tall. This small vessel was perfect for a compact bouquet with two simple ingredients. First, I filled the opening with four or five luscious heads of ‘Limelight’ hydrangea, the stems cut fairly short, say 3 inches long. To fill the spaces between the hydrangea heads and to add contrasting color and texture, I made miniature bunches of ‘Strawberry Fields’ gomphrena by wiring five slender stems with wire so that each bunch could be inserted as if it were a single flower. This is the perfect arrangement to enjoy while it’s fresh and then let it slowly air dry as an everlasting bouquet. 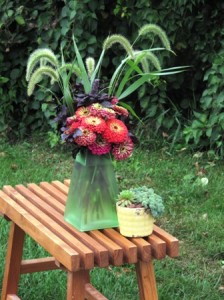 Project Two features a tall, square, modern green glass vase with a neck opening that’s smaller than the base. So of course, to make it look abundant and full, I had to create volume and height. The starting flowers here are sultry-looking zinnias from a new seed mix called ‘Queen Red Lime’ – I love the terra cotta, mauve, and reddish blooms with a lime-green center. Once I had those in place, I thought: We need dark foliage. And lucky for me, the folks at Howell’s, like many cut flower growers, have discovered how well basil performs as a cut ingredient – especially purple basil! Think about it: when you harvest basil from your garden and bring it indoors to keep in a jar on your windowsill, have you ever noticed how long those cut stems last? Of course basil is a great cut floral ingredient! The third element here is one of those happy coincidences – common foxtail grass, which some consider a ditch weed, that perfectly echoes the green vase, and catches the late summer sunlight just beautifully. Three simple ingredients in perfect harmony. 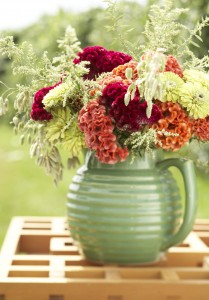 Project Three is one of my very favorites, because of the mix of colors and textures. Contained in a vintage pitcher, I absolutely love the playful combo of velvety cockscomb (the crested form of Celosia ) with all the lime green contrasting forms. Here’s how I made this bouquet. First, I filled the pitcher with soft greenery, a white mugwort (Artemisia lactiflora) that fills the opening and becomes the supporting structure for all the subsequent stems. Second, I stripped foliage off of 10 maroon and coral-hued cockscomb flowers; then I cut the stems pretty short and inserted each into the fluffy base, making sure that you can’t see the stems showing at all. Third, I added some ‘Green Envy’ zinnias, which echo the pitcher’s green quite nicely. For a sense of movement, as a final touch, I inserted taller stems of quaking grass (Brizia maxima), so they seem to hover above the bouquet. Casual and the epitome of summer!

Two other projects fell on the cutting room floor, so to speak, so you get to see them here! Actually Project Four showed up in the iPad edition, along with a video interview filled with my eco-savvy design tips. You actually have to download the July edition to see the entire interview (filmed by David Perry) on an iPad.

Here’s a rough-cut edit of the video: 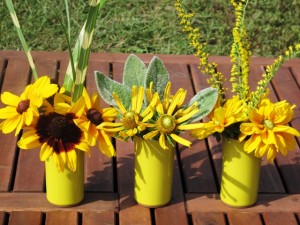 Anyone can replicate Project Four, a fun trio of mini-arrangements, which are displayed in a row or grouped together on the table as a centerpiece. We used three yellow tumblers that art director Scott Johnson brought from his kitchen cupboard. The simple idea was to showcase several varieties of black-eyed Susan flowers (Rudbeckia sp.) with a mix-and-match of foliage choices. The daisy-like Rudbeckia varieties include, from left: ‘Indian Summer’ and ‘Denver Daisy’ with zebra grass (Miscanthus sinensis ‘Zebrinus’); ‘Irish Spring’ with lamb’s ears; and ‘Prairie Sun’ with goldenrod (Solidago). This type of design works well when you only have one or two of anything in bloom at a given time – voila! 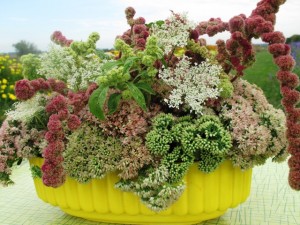 For Project Five, the last arrangement, I had to rise to the challenge of creating flowers that wouldn’t fall out of the wide, saucer-like bowl. Similar to cutting the hydrangea stems short in the first design, I cut lots of Sedum ‘Autumn Joy’ in their unopened stage. A this point, they still look pretty green because the buds are tight. When you cut the stems short, say at 2-3 inches, you can really cram a lot inside an opening. To me, they almost look like heads of broccoli! But the tightly-packed sedums create a foundation through which other stems can be inserted. And in this case, I inserted old-fashioned love-lies-bleeding (Amaranthus caudatus) and Queen Anne’s lace. The tassels cascade over the edge of the shallow bowl, and while it’s kind of quirky, I really love the effect of textures and colors.

Together, these five designs demonstrate the diversity of the cut flower world – and ways to arrange blooms without using florist foam to stabilize the stems. Have fun playing around with these ideas using your own vases and garden flowers.

This entry was posted on Wednesday, October 26th, 2011 at 2:50 pm and is filed under Creativity, floral design, Gardening, General, Plants, Playfulness, Writing. You can follow any responses to this entry through the RSS 2.0 feed. You can leave a response, or trackback from your own site.