Floral design – straight from the field 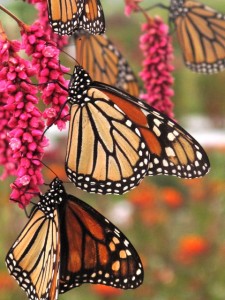 Even the Monarchs were willing to be photographed at the flower farm. 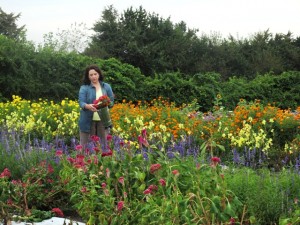 In a glorious Iowa field, I gathered flowers for my bouquets.

One knows she’s in relationship trouble when her own mother and dear friend Susan, who was her maid-of-honor in 1984, call to say, “I haven’t heard from you for a while, so I checked your blog to see what you have been up to.”

Umm. I’ve been on the road a lot lately. Way too much on the road for my liking. Being away from home and traveling for 15 of the 30 days in the month of September was ridiculous, but (I guess) necessary. Anyway, for the first time in three years, I went for a full month without posting an entry on this blog. Yikes!

There were many blog posts composed in my mind as an idea or notion would occur to me. “I should write that down,” I thought. But then, the droning lull of the airplane engine would convince me a quick “up in the air” nap was in order. Or I didn’t have access to the Internet. Or something like a deadline for a volunteer project or even – wow – a paying project . .  or someone else’s needs that were way more pressing came along.

So here we are in October – how apropos. The new leaf is turned. I don’t have to travel again until Oct. 12th and that is a single overnight jaunt for a photo shoot in Bellingham, 100 miles to the north.

Seriously, I should be able to squeeze in some news, insights, ideas, GARDENS, cool FLOWERS, and more between now and then.

The story I want to share here is from September 14-16. After six full and intense days for the annual Garden Writers Association Symposium in Dallas, I jumped on a tiny airplane and flew to Des Moines. I met up with the team I collaborate with at Better Homes & Gardens magazine. Eric Liskey (deputy garden editor), Jane McKeon (associate garden editor) and Scott Johnson (deputy art director) and I were up to our knees in flowers. 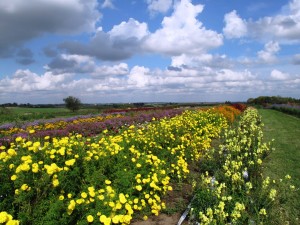 A view across the flower fields at Howell's Farm in Iowa. Isn't this just the most perfect cloud-filled sky you've ever seen? 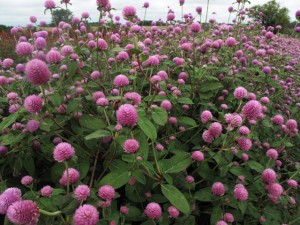 The flowers – ingredients for a how-to story on creating bouquets from field-grown arrangements – were in all their glory at Howell’s Farm.

Today, the farm is an 800-acre destination for people in search of the best varieties of decorative and seasonal crops. In the spring, summer and fall that means people come for the huge variety of annual and perennial flowers, herbs and grasses for cutting and drying. In the fall, they enjoy the amazing pumpkin patch and a cool corn maze. By the end of the year, in the winter, it’s the Christmas trees as main attraction.

After I landed in Des Moines, Eric and I drove out to Howell’s, about 25 miles outside of Des Moines, on a breezy, but gorgeous afternoon. Scott met us there and the three of us followed Erin Howell, Fred’s daughter, on a walk through the five-acre flower fields. As is my typical reaction whenever I visit a flower-growing operation, I was practically hyperventilating with excitement. 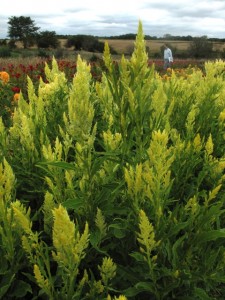 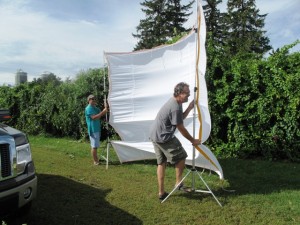 This shows how windy it was as Eric (left) and Scott (right) held the oversized "silk" to cast a shadow for one of the bouquet vignettes.

The variety of flower form, color and vigor in Howell’s crops was dazzling. The setting itself was breathtaking. We talked through our options of ingredients, including what “design lessons” we wanted to illustrate in the story, what sizes and shapes of vases we needed to use, and how to CHOOSE among all the great flowers that seemed to say “pick me, pick me!”

Back at the editorial offices, the three of us huddled with Jane to talk about the floral design projects we wanted to assemble and photograph the following day. This was no small task. Everything has to be mapped out so we could envision how things will look on the pages of Better Homes & Gardens.

The sheets on Scott’s clip-board featured his sketches of mini-magazine pages, complete with thumbnails of vases, blooms and notes to show how a four-page flower arranging story might look. We had to think about a color palette for the vases, taking into consideration the textures and hues of each flower lesson. Then Scott raced out to pick up props from all his secret sources (including tables, stands, vases, pitchers, etc.) and Eric and I took a drive over to his personal garden. We needed a few extra plant ingredients to enhance the designs we had in mind, so Eric obligingly let me cut some lambs’ ears and goldenrod from his borders. What else? Oh! a visit to the mall to pick up a denim shirt for me to wear in the photo shoot. 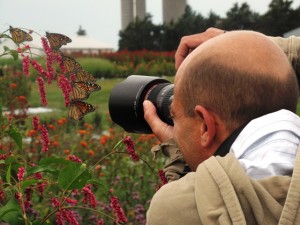 BH&G staff photographer Blaine Moats wanted the perfect Monarch shot. He actually got dozens of perfect shots because the butterflies were amazingly cooperative. 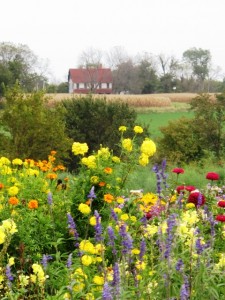 Yes, there it is: Francesca's House

The next morning arrived bright and early and we met out at Howell’s around 7 a.m. Since Jane and I had designed the first two looks the afternoon before, we had a jump start for the photography. But then, the light seemed pretty good for a portrait, so Scott sent me out to cut flowers while our photographer Blaine Moats shot away.  As I walked between the rows of marigolds, zinnias, sunflowers and milkweed, filling my galvanized French flower buckets with stems, I thought: How lucky can a gal get? It was a joyous experience to just be there, to know that I was getting to create bouquets and arrangements that will be featured in the magazine sometime next summer, and to work with such talented, artistic colleagues.

We were soon distracted by a sight so compelling and awe-inspiring that we simply had to stop working. Well, except for Blaine, who just turned his lens on the scene and began to document it. A harmonic convergence of Monarch butterflies was waking up as the day began to warm. They seemed to want to pose for photos, since even I was able to capture some really sweet butterfly portraits as the winged creatures breakfasted on the nectar of hot pink “Kiss-me-over-the-garden-gate” flowers (aka Polygonum orientale). 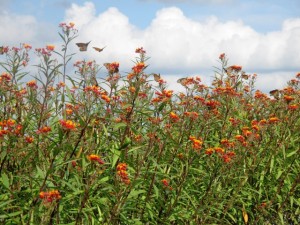 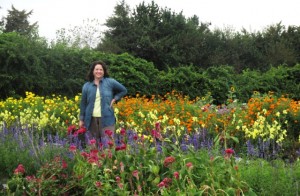 Me again - can't stay away from those blooms!

If that wasn’t thrilling enough, by the time Jane McKeon arrived in the afternoon, I had another amazing sight.

“Look over there,” Jane said, gesturing to a distant and lonely farmhouse. “Do you know that it’s Francesca’s house?” Yes, this was the actual Iowa farmhouse used by Meryl Streep’s character Francesca Johnson in the famous film “Bridges of Madison County.”

Another reason to visit Howell’s Farm is to gaze across rows of flowers and see that setting. I may have to rent the film just to see that house on the screen, and to appreciate Meryl’s Oscar-nominated performance from 1995.

There’s lots more to share but my bouquet designs are embargoed until they show up in the magazine. I can’t wait to show them off to you.

This entry was posted on Saturday, October 2nd, 2010 at 7:46 pm and is filed under Creativity, floral design, Gardening, General, Plants, Writing. You can follow any responses to this entry through the RSS 2.0 feed. You can leave a response, or trackback from your own site.

11 Responses to “Floral design – straight from the field”