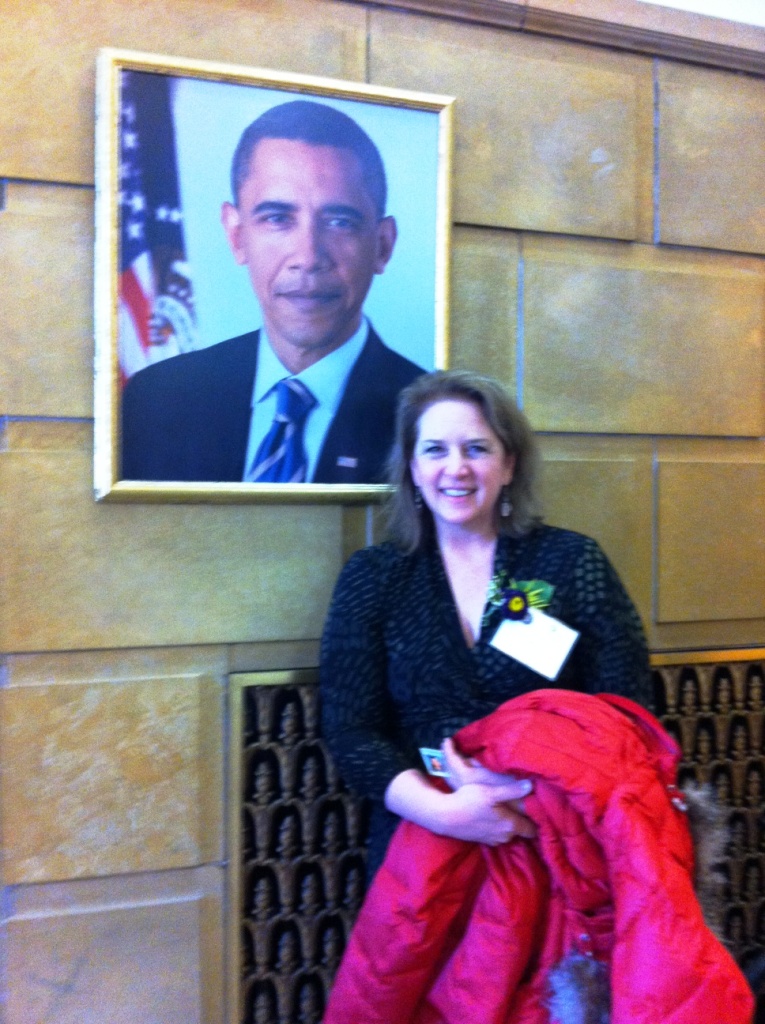 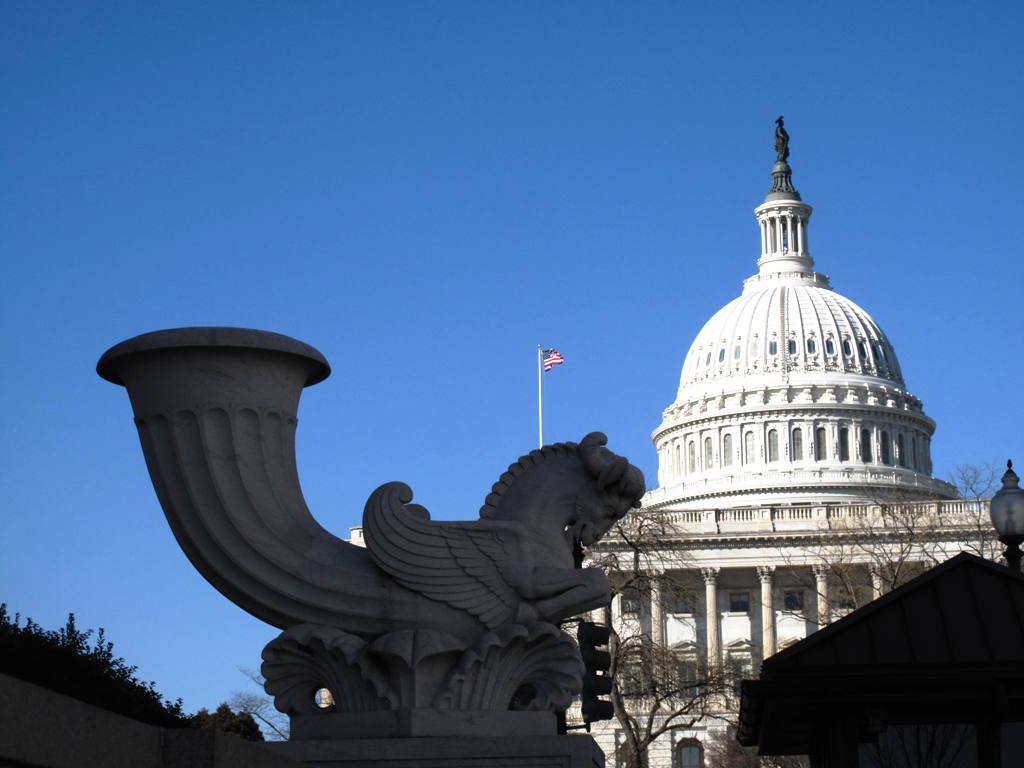 A view of the Capitol dome. Never ceases to enthrall! 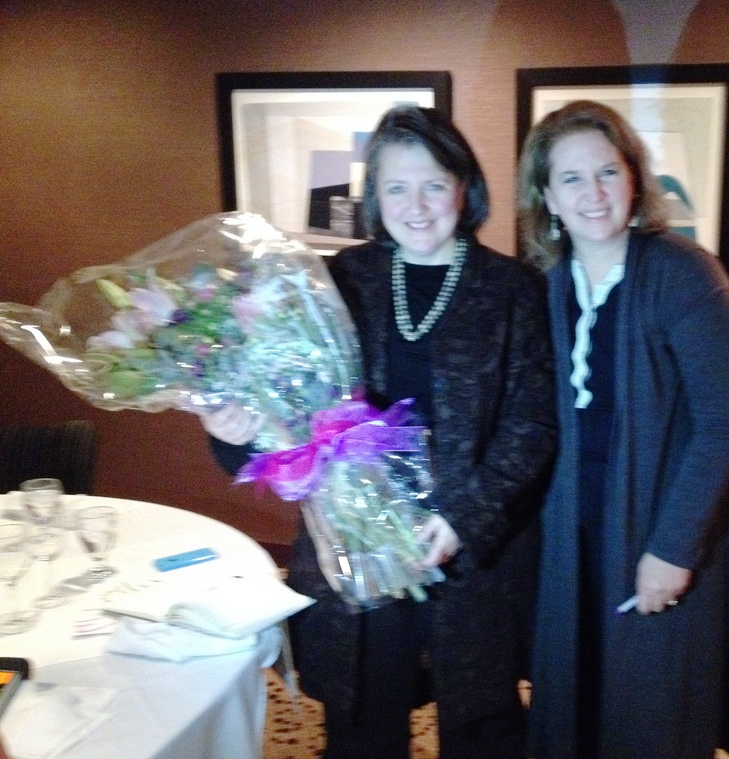 Such an honor to meet former Deputy Secretary of Agriculture, Kathleen Merrigan. She is a leader in supporting and advocating for organic agriculture and an important voice for U.S. flower farmers.

We took D.C. by storm, propelled by the monumental news that the White House featured American grown flowers at the Feb. 11th State Dinner with the President of France. That show of support from the Administration, which elevated American flowers to their rightful place alongside American food and American wine in an important public ceremony for our nation, was super encouraging.

One highlight was meeting and hearing from former USDA Deputy Secretary Kathleen Merrigan, who has been a huge champion for American grown flowers and flower farmers. She is moving on to do some other exciting things in the world of sustainable agriculture, but I hope to feature a Podcast interview with her in the future, so you can hear her story.

Along with Lane DeVries, a commissioner and immediate past chair of the CCFC, and a flower farmer based in Arcata, Calif., and Diane Szukovathy, president of the SWGMC and co-owner of Jello Mold Farm in Mt Vernon, Wash., I was asked to speak at the Press Conference. Our panel was moderated by Kasey Cronquist, CEO/Ambassador of the CCFC and the instigator of the DC Fly-ins that allow American flower farmers to tell their stories to their elected representatives.

I was given permission to record the press conference, which you will hear in this Podcast. Below, I have transcribed some of the key “sound bites” from this event so you can get a flavor for what was said:

“What makes me really, really happy to do this is one major thing that I’ve pushed for along with a few of my Republican colleagues and actually more of my Democrat colleagues and that’s simply ‘Made in America.’ It’s like food, and clothes and the hammer you buy at Home Depot. If you buy American made, then you’re not just helping out the economy, you’re employing your neighbor, your family, friends (and the) people you go to church with. 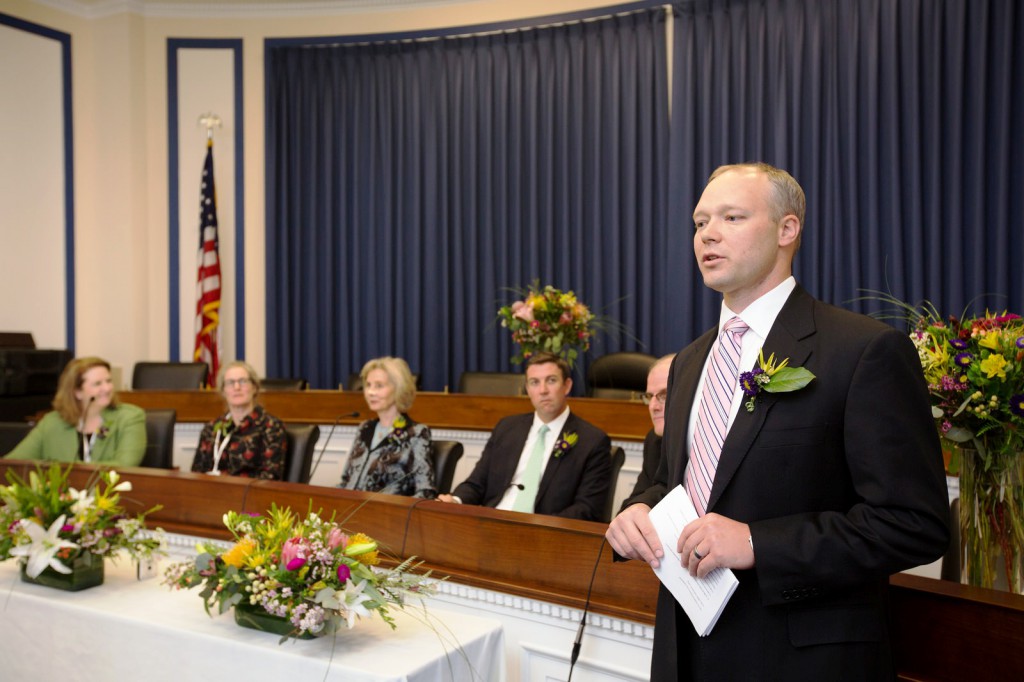 “It’s very clear to me that (American flower farmers) don’t want a handout. They just want a fair chance to compete. It’s a very compelling story that has inspired me to create this Caucus because we want to make sure that American grown stays alive and well. We’re going to organize educational briefings, publicity events, other activities for members of Congress and staff. And of course, we’ll be surrounded by flowers wherever we do this so there will be a visual impact — olfactory, as well. The benefits of a vibrant American flower industry reach and touch every corner of our nation. It’s the core message of the Cut Flower Caucus and we’re excited to get to work.” 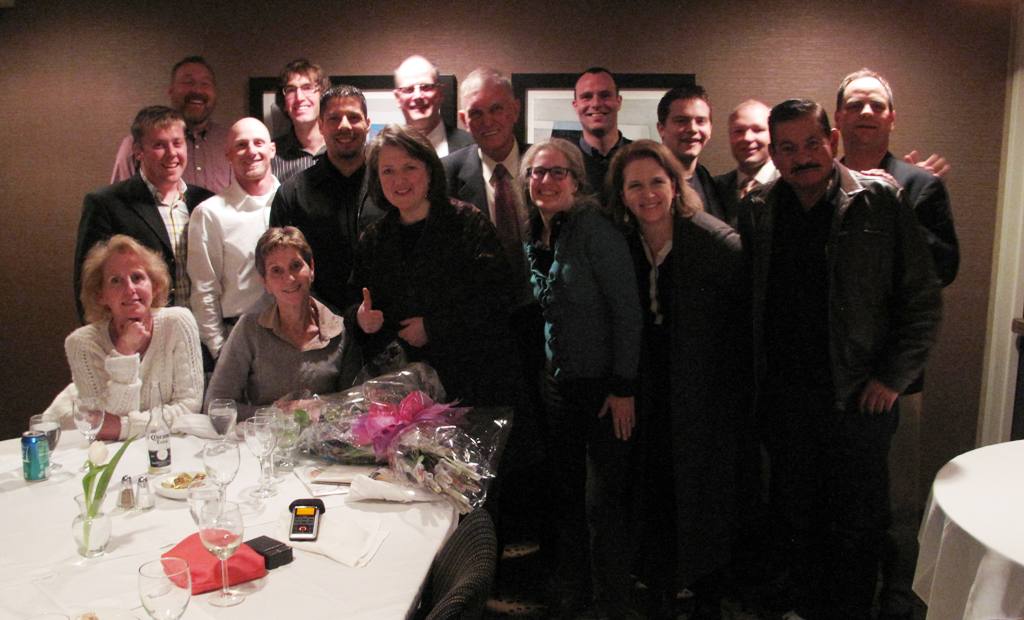 ” . . . increasing demand for local flowers has reinvigorated our industry and it provides hope and future for the sustainability of the family farms in our industry. Just two weeks ago, the White House actually featured domestically grown flowers for the first time during a State Dinner. And it is our hope, with the help of the Flower Caucus, that going forward we can  make this a commonplace (practice).” 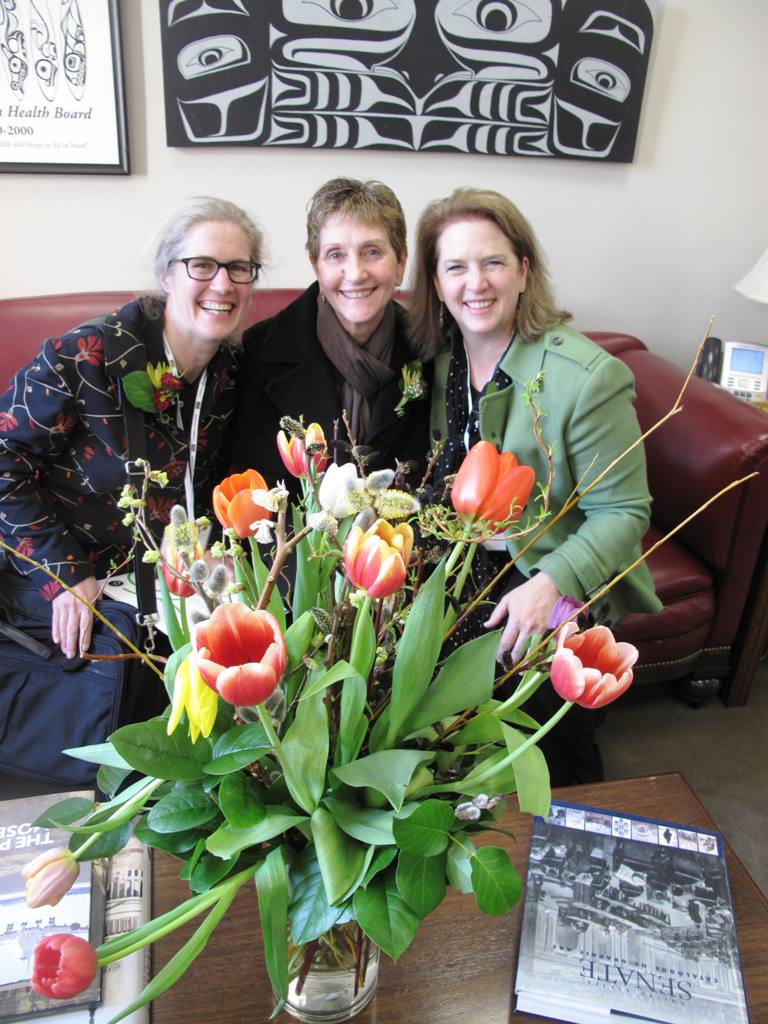 With the “Washington State” Delegation, from left: Diane Szukovathy, Vivian Larson & Deb Prinzing. The Washington-grown flowers were delivered to the Congressional representatives who we met with.

“I’m not interested in being a farmer if I can’t do it ethically and sustainably, so I was very inspired early on by an essay that Wendell Berry had written on agronomy and ecology suggesting that you cannot have humans taking care of the land unless they can make a living off of the land. We grow without chemical fertilizers and pesticides. We’re extremely aware of the fact that we share our land with many critters, so everything that we do is influenced by that. It’s not just a marketing gimmick for us. It’s the core of what we do. And I know that I speak for many growers all across this country who feel the same way. It’s a heart-driven industry.” 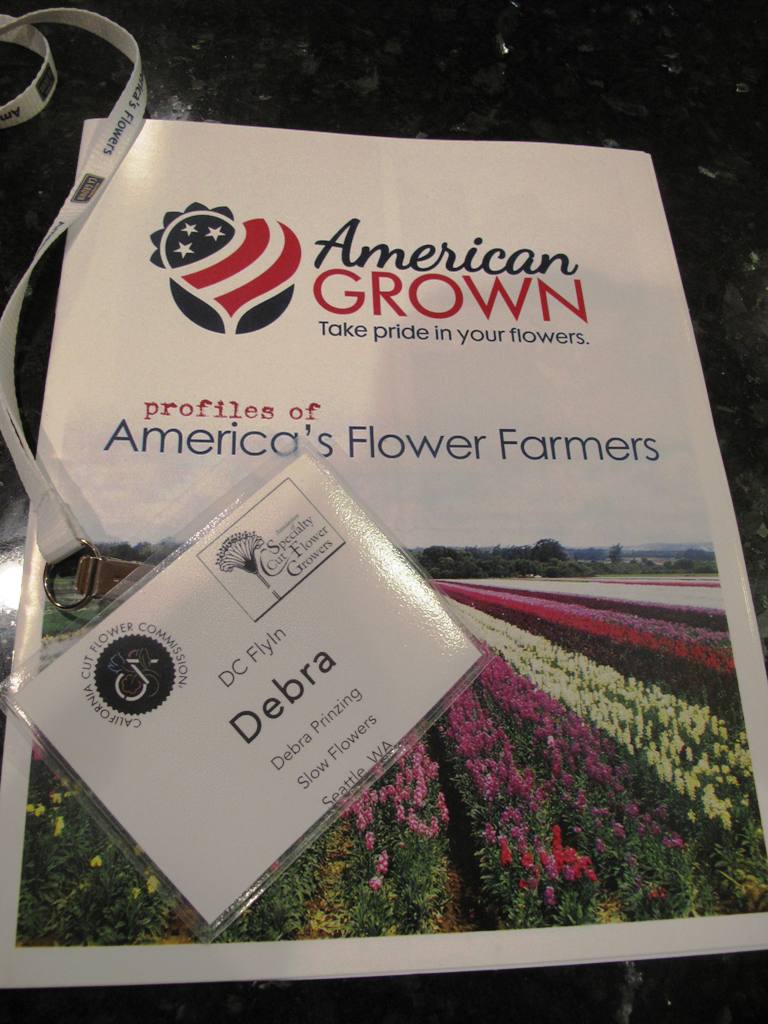 “What we’re seeing in today’s marketplace is a change. More consumers are caring about where more things are coming from in the marketplace, in grocery stores and in everyday purchasing, so why not flowers? Our farms really take great pride in the flowers that they grow. It’s our job as American Flower Farmers to ensure that the flowers we grow are part of the tablescape of the American home – and that (consumers know) their flowers are as fresh and sustainably grown as the food on their plate.”

I am still floating on air because if this transformative occasion – one that underscores for me the power of story, the strength in shared voices and the significance of taking a stand for what I believe in. Visiting Washington, D.C., celebrating American flowers and the farmers who grow them, and lending my voice to the conversation — it all adds up to a life-changing experience.

I predict that someday soon, when every room of the White House is filled with American Grown Flowers and every single event staged by the Administration in power is decorated and signified by flowers grown here at home, we’ll look back on Feb. 27, 2014 as the single “tipping point” – the event that shifted our nation’s attitude and understanding about the flowers in our lives. Soon these actions — to choose seasonal and domestic flowers – will be a natural practice.

If you are interested in being part of this movement – and especially if you are interested in reaching out to your own Congressional representative to urge her or him to join the Congressional Cut Flower Caucus, please contact me at debra@debraprinzing.com or on twitter @myslowflowers. I will get you the simple details you need to extend the invitation to your Representative.

It has been my pleasure to share with you today’s podcast conversations.

Because of the support from you and others, listeners have downloaded episodes of the Slow Flowers Podcast nearly 8,000  times! I thank you for taking the time to join to my conversations with flower farmers, florists and other notable floral experts.

This entry was posted on Wednesday, March 12th, 2014 at 4:16 am and is filed under American Grown, Blog Posts, Creativity, Entertainment, floral design, General, Podcast Episodes, SLOW FLOWERS Podcast, Slowflowers.com the Directory of American Flowers, Writing. You can follow any responses to this entry through the RSS 2.0 feed. You can leave a response, or trackback from your own site.