Making it to the New York Times: The author’s “holy grail” 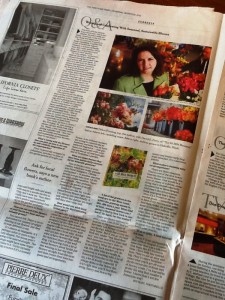 A friend emailed me the photo he took of today’s paper and wrote: “Look who I ran into”

Today’s New York Times featured a piece about The 50 Mile Bouquet, complete with our book’s cover, two luscious flower photographs by David Perry, and a portrait of me. Everyone in the St. Lynn’s Press family is ecstatic, to say the least. This sort of thing doesn’t come around often, if ever, in the life of an author. Here is the full text of the Q&A.

Michael Tortorello, a gifted writer whose work regularly appears in the NYT Home section, set up a phone interview with me last week. Due to time zone differences, his travel and my own travel schedule, it turned out that between the two of us, we could only find one hour that worked for a phoner! I was literally seated in Stephanie Clevenger’s SUV, which was parked in front of The Red Barn – the gathering place for Yakima Master Gardeners. The minute Michael and I finished up the Q&A, which he recorded, I dashed into the barn and gave a Container Design presentation to about 75 MGs . Whew. 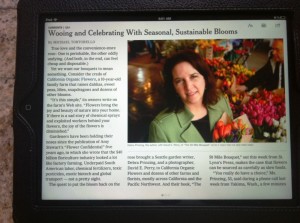 Another friend sent me a photo of her Ipad edition of the NYT.

There was a similar crunch when it came to getting a photograph, which took place earlier this week with just a few hour’s notice. Lola Honeybone of MediaWorks Nashville, a friend whose book PR skills are unparalleled, and whose help I enlisted for our book’s publicity efforts, emailed to ask: Where would be a good spot for a portrait?

I immediately thought of the brilliantly beautiful Pike Place Market stall operated by Alm Hill Gardens (Gretchen Hoyt and Ben Craft, owners). This is the single best place in Seattle for organic tulips, daffodils, hyacinths, lilies, and other amazing crops that come later in the year – like lilacs and peonies. Their farm is located in Everson, Wash., close to the Canadian border, and Alm Hill is a gold-standard flower fixture at the Market. My go-to source! Plus, since we have a 2-page spread on Gretchen and Alm Hill in The 50 Mile Bouquet, it seemed fitting to take the photo there.

I met freelance photographer Kevin Casey at the stall on Monday afternoon. My flower-seller pal Max Clement was working, as he does most Mondays, and he indulged us by stashing Kevin’s gear and my stuff while we did the photography. It was certainly less painful that I thought it would be, thanks to Kevin’s easygoing style and also the way he let me know what “worked” and what didn’t. Do I smile? Do I look serious? Ugh! 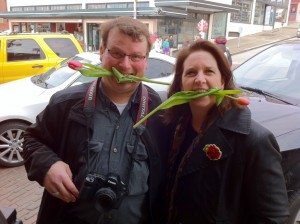 Here I am with a “taste of tulips,” posing with Kevin Casey, a NYT freelance photographer.

In the end, I’m pleased with the photo used in the story – especially because Max and the tulips appear in the frame!

But I had a chance to turn the tables on Kevin, too. I asked him to pose with me for a photo that Max shot with my Iphone. We look goofy, but who cares? It was way fun and an unforgettable experience. Turns out, Kevin is an old newspaper staffer like me, so we compared notes about editors and writers with whom we’ve both worked in the past. It really is a small world.

Last evening, I received an email from Mary Robson telling me that she’d seen the story on the NYT’s web site. It’s also fitting that I first heard from Mary, a dear friend to so many gardeners and readers from her days as a popular columnist with The Seattle Times, and as King Co.’s Extension Agent who trained hundreds of Master Gardeners over the years. Mary and I co-authored The Washington-Oregon Gardener’s Guide in 2004 (and Lola was our publicist then – see what a small world it is?). What a treat to hear it first from her – the best co-author a girl could ever have.

This morning, the “real” print edition arrived in our driveway. Bruce went out to get it first and used the edge of the Home section to tickle my face and wake me up at about 6:30 a.m. Later in the day, friends texted and emailed their own photos taken of the story in the print edition and Ipad version.

I know that the 24-hour high is about to wind down, but then again, maybe not. There is something called an after-life for stories. I know because when my own articles are posted online I’m always surprised to see that they have an extended shelf life, sometimes for years.

For now, I’m just grateful and happy to have been part of the experience. Something great is coming from the combined creative efforts of two people who adore and admire flower farmers and floral designers. So as my friend, the late Linda Plato, would have said: “It’s all good.”

This entry was posted on Thursday, March 29th, 2012 at 8:53 pm and is filed under Book reviews, Creativity, floral design, General, Plants, Playfulness, Writing. You can follow any responses to this entry through the RSS 2.0 feed. You can leave a response, or trackback from your own site.

11 Responses to “Making it to the New York Times: The author’s “holy grail””