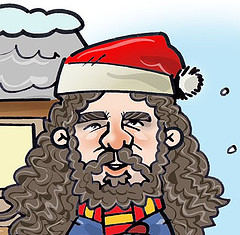 Uncle Wilco, as he is depicted on his web site, We *Heart* Sheds (well, this was a holiday version from 2007)

Here’s some background about SHED OF THE YEAR and its creator Uncle Wilco, a cyber friend who lives in the UK in South Wales, and is the creator of We (Heart) Sheds and several other projects.  I was thrilled to discover that I was not alone on this quest for finding and documenting awesome backyard structures, that many kindred spirits existed on this globe to share my journey. Here is the original story I wrote about Uncle Wilco nearly two years ago. A memorable quote about his Shed of the Year contest:

. . . the British have a love affair with the shed, so really it’s just snowballed. I was lucky to do a few radio interviews. I got the impression they thought I was a nutter . . . ! But at least people realise that I have a passion for sheds, so that’s all that matters.

Imagine my surprise when Wilco asked me to join his illustrious team of judges to represent as the International Judge for the 2010 Shed of the Year competition! The event culminates with an announcement in early July, during National Shed Week, and I’m eager to participate. I’m hoping to get over to the UK to join the others, but at the very least, I will do my part on this end. I encourage any of my readers to submit photos and enter. That is all it takes!

Thought I’d kick things off by telling you a little more about the competition. In the words of Mr. Wilco himself:

Q. You started Shed of the Year in 2007, right? So you’ve had 3 winners!
What has surprised you most about the scope and diversity of sheds
around the globe?

A. I have run readersheds since 2001  and thought it was time I should celebrate all these great sheds. So I started Shed of the Year. The last three winners have been very different: 1) A Roman Temple,  2) A Pub Shed, and 3) a Cabin. I look forward to shed of the year 2010 — it could be a workshop or studio or even a hut. That’s the thing — we don’t know until the public have voted and the judges have made their decisions for Shed Week 2010.

Q. Who does Sheds better, the UK shed aficionados or the North American ones?

A. Well, I am biased. UK sheds Rock- or should I say UK Sheddies rock. But you US sheddies have a different view on sheds. The UK history with sheds as mainly a man thing is very long and it’s the sheddies that make readersheds.co.uk

Q. Can you please describe “wossname” and how I can explain it to US readers?

A. I am not great with words , so I tend to fill in things I can’t think about with “wossname.” So it’s a term in the UK, like a thing or a “wotsit,” when you can’t think of the real word! 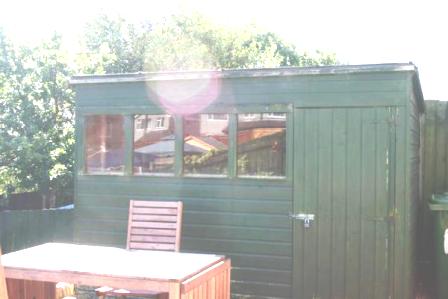 Here's where Uncle Wilco hangs out and enjoys his home brew

Q. If you had to spend your final days inside your own shed, what three essential items would you need to bring with you?

A. That’s very difficult. I would say family and friends and  my dog, but as for items it would have to be some home brew (beer).

Q. What kind of swag can I expect for being a Shed of the Year judge?

A. What, the glory of being a judge in the World’s most favourite Shed competition is not enough?

Q. How many entries have you had from North American shed owners (in past years)?

A. Well, it’s not just North American sheds. It’s International, too. We love sheddies from the Americas, Canada, Europe and Australia and New Zealand. You can view all the international sheds entries (199 of them to join the 1200 UK ones) here.

Q. What else do you want my readers to know?

A. That we are welcoming entries to Shed of the Year 2010 now and would love to have some more  Stylish Sheds added. All I ask is that the sheddies add a few good images — including external/internal shots. The more images the better, so the public can get a  good look.

Thanks so much Uncle Wilco – I will do my best to pump up the entries from the International contingent. See you soon.

This entry was posted on Tuesday, November 17th, 2009 at 8:34 am and is filed under Architecture, Creativity, Entertainment, Gardening, General, interior design, Playfulness, Shed Glossary, Sheds & Havens. You can follow any responses to this entry through the RSS 2.0 feed. You can leave a response, or trackback from your own site.