Do you have the most stylish shed in the world?

Uncle Wilco, my UK penpal who presides over We*heart*Sheds and Readershed blogs, has announced his 2009 Shed of the Year Contest.

I encourage anyone who owns a backyard shed to log onto his site and enter. Submit your photographs – we need international participation, folks!

Of course, I am angling to be tapped for the popular competition’s “International Guest Judge” slot, but I may have to butter up Uncle Wilco with chocolate chip cookies (or more likely, a keg of good English ale). I’m not sure what it takes to bribe these Brits, but flattery and admiration should help, right? He shouldn’t forget that I’m the gal who named him the “Bad Boy of Sheds” – a term of endearment, of course. 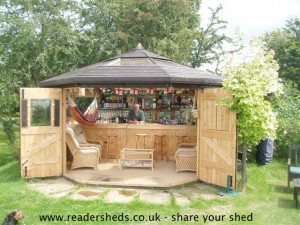 Here are some details on last year’s winner, a decidedly Man Cave sort of place that is part shed-part pub (pictured above). Very cool – congratulations, Tim!

“Do you have a garden shed that is unique?” asks Uncle Wilco, head sheddie of www.readersheds.co.uk.

“Maybe it’s your own little bolthole away from the trials of life. Maybe you have converted your humble garden building into a pub, or are a treehugger at heart and are building an eco shed, or maybe it’s just a normal wooden building that’s special to you.”

If you as a sheddie are proud of your shed then now’s the time to enter this year’s ‘Shed of the Year’ competition, which takes place during the third National Shed Week commencing July 6th 2009.

Together they will be deciding if your shed will make the grade and take the top shed crown.

[Hint to Wilco: What about DEBRA as your guest North American judge?!!!]

Following a public vote starting June 2009 which will produce a shortlist of winners, the judges will pick their “Shed of the Year 2009” during National Shed Week itself.

Last year’s winner was Tim from Suffolk with his amazing octagonal Pub Shed. Sheddies can join Tim – whose shed was featured in national newspapers and on television – and the hundreds of other sheddies by ‘sharing your shed’ on the internet’s favourite shed fan site, www.readersheds.co.uk

Last year there were more than 800 sheds fighting for the title of Shed of the Year from garden pubs, TARDIS sheds, allotment sheds, ones hand made from English Oak, cabins, summerhouses and even a shed on wheels.

National Shed Week 2008 was mentioned both on-line and off-line by national and international press.

“The excitement! The anticipation! Shed Week 2008 starts on Monday, and we sheddies are in a frabjous state. Shed Week celebrates the importance of the shed, hut or gazebo in our culture as a place of refuge, storage and amusement” – The Times

“I can say that Tim in Suffolk did a wonderful job with his pub shed, with complex framing and difficult trapezoidal skylights” Lloyd Alter – treehugger

“All things shed-like are being celebrated up and down the country.” -Radio 4’s Women’s Hour

This entry was posted on Tuesday, January 20th, 2009 at 11:02 pm and is filed under Creativity, Sheds & Havens. You can follow any responses to this entry through the RSS 2.0 feed. You can leave a response, or trackback from your own site.

One Response to “Do you have the most stylish shed in the world?”