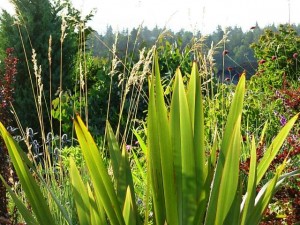 Back-lit by the late afternoon sun, the phormium glows in Stacie's front border

Last week’s Seattle visit included quite a bit of garden touring, and I feasted my eyes on some gorgeous places. One of my stops was to see fab designer Stacie Crooks, whose work has set a standard for sustainable beauty. Stacie and our friend Tina Dixon, also a widely published designer who specializes in container gardens, hosted a Garden Soiree for some of their gal pals. They were sweet to arrange the dinner around my time in town, ensuring that I got to see some of my very favorite women, including those shown here: 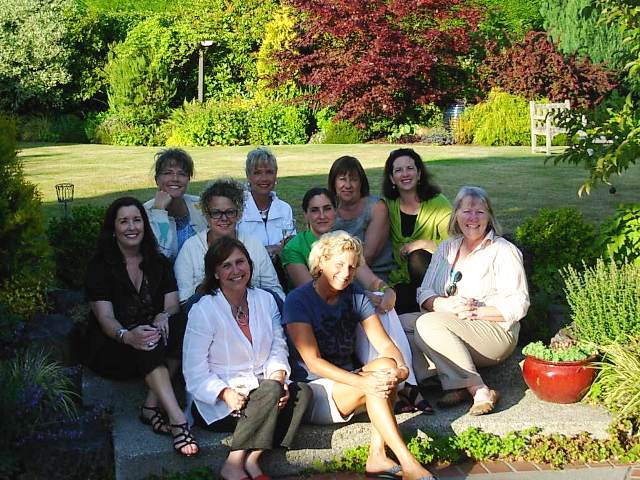 My article about Stacie and her husband Jon’s vibrant, textural garden appeared in the May 2008 issue of Seattle Homes and Lifestyles, accompanied by some pretty awesome photography by Allan Mandell. I have included the full text of that story below – it explains Stacie’s inspiring design philosophy and tells the story of how she created this very special place. I snapped a few photos at the party, to share with you here: 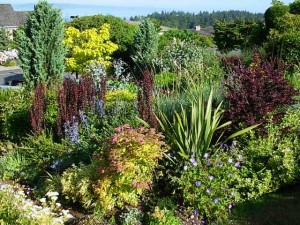 Wine and gold textures are lovely and drought tolerant 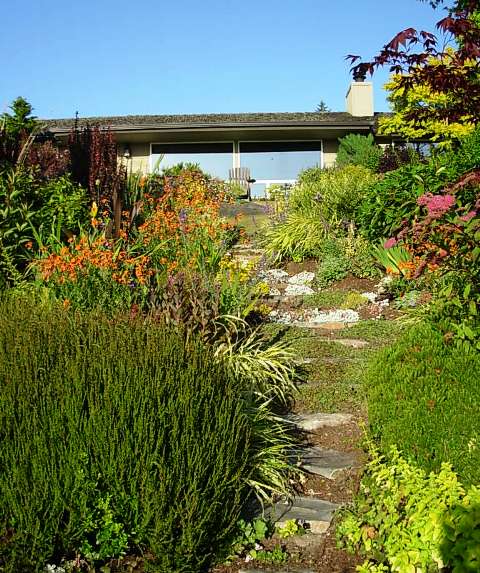 Stepping stones make it easy for Stacie to garden and lure visitors through the sea of foliage, blades and blooms. She uses punches of orange to brighten the scheme (Epilobium californicum 'Dublin' and Calluna vulgaris 'Firefly' are favorites) 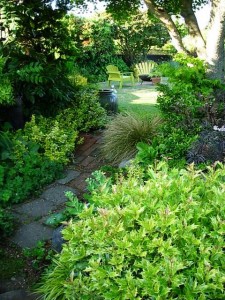 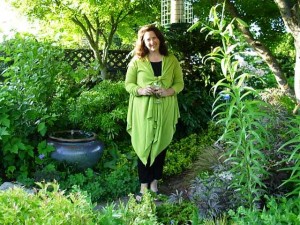 Debra in green, on the path 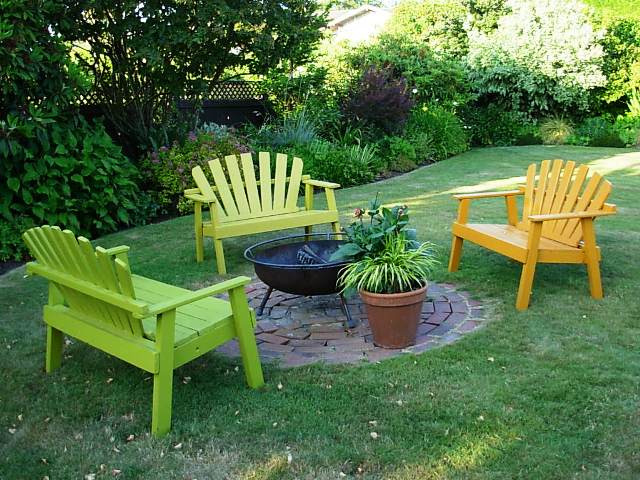 Colorful Adirondack benches, each painted a different color to match the foliage 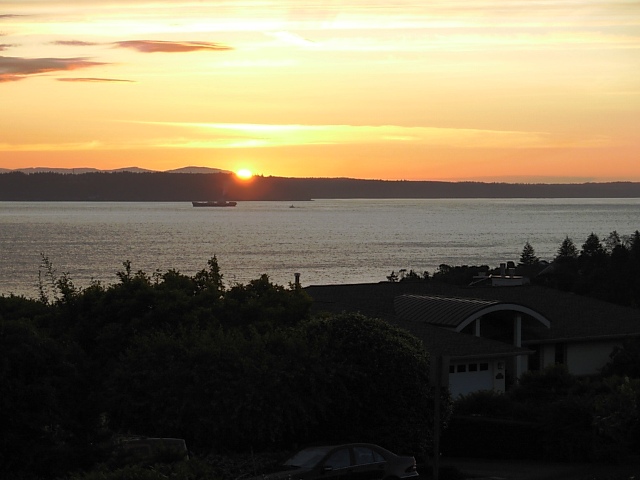 A perfect end to an unforgettable evening with my garden friends 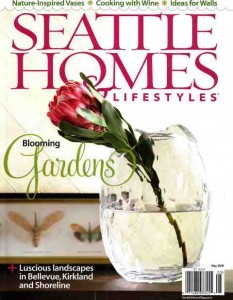 The rich palette of golden, green, burgundy and silver foliage plants thriving in Stacie and Jon Crooks’ Shoreline garden north of Seattle suggests that theirs is a well-pampered landscape.

But the opposite is true.

Stacie, owner of Crooks Garden Design, has transformed a sloping half acre into a harmonious tapestry of beds and islands that explodes with interest in every season. The design features trees, shrubs, ornamental grasses, succulents and perennials that are adapted to harsh conditions: western exposure, maritime gusts, poor soil and no irrigation. 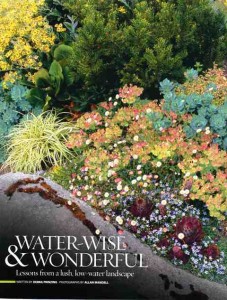 That it’s also gorgeous offers an inspiring lesson to countless young designers and students who have taken Stacie’s classes through the Saving Water Partnership, a consortium of local water districts.

“Among our focus groups, there is a misconception that a water-wise garden is a bunch of unattractive natives, cactus and gravel, that it can’t be beautiful,” says Elizabeth Fikejs of Seattle Public Utilities, organizer of the Savvy Gardener workshops. “Stacie allows people to truly experience the water-wise garden in three dimensions,” rather than just seeing plants in photographs, she raves.

In 1991, Jon, Stacie (pregnant at the time with her second son, Trevor) and four-year-old Dylan, moved to a 1950s rambler in Innis Arden, a neighborhood overlooking Puget Sound. The half-acre lot and sweeping views were the property’s best features. “Because of its age and architecture, this house had teardown potential, but we worked with it,” Stacie says. Although overgrown rhododendrons and shrubs dominated the property, they saw the potential for creating a vibrant, new garden here 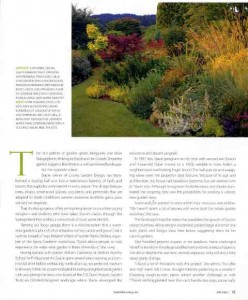 Stacie and Jon wanted to work within their resources and abilities. “We haven’t spent a lot of money and we’ve built the whole garden ourselves,” she says.

The landscape’s transformation has paralleled the growth of Stacie’s business, which designs residential gardens large and small. She tests plants and design ideas here before suggesting them for her clients’ gardens.

One hundred percent organic in her practices, Stacie challenged herself to transform the playground-like front yard into a textural tapestry. She did so, despite the vast lawn, western exposure, rocky soil, and almost twenty-percent grade change.

“I faced a lot of limitations with this project,” she admits. “But after one high water bill, I chose drought-tolerant gardening as a solution.”  Choosing tough-as-nails plants solved another challenge, as well: “There’s nothing planted here that can’t handle two boys, soccer balls, a Frisbee and a Jack Russell terrier named Rita. This isn’t a fussy garden.”

Stacie and Jon rented a sod-cutter, and removed and gave away the turf in their expansive front yard. They tilled up rocks and roots and incorporated 30 yards of organic planting mix to improve the native soil. Stacie borrowed extension cords from neighbors, laying out the shapes of her new planting beds to create a sinuous wraparound border that encompasses a 70-by-40 foot irregularly shaped island at the center (grassy strolling paths link the beds, allowing for people and pets to navigate the “circuit”).

“I choose colors I like – golds and burgundies,” Stacie says, likening her saturated palette to the medieval tapestries she loved seeing in Europe both as a student and later in the mid-1990s. “Plus, I am the texture queen.” As a designer, she is drawn to strong plant shapes that play off of each other. “I like to alternate spiked, round, lacy and layered forms. It’s like a puzzle that has to fit together.”

Last summer, this garden existed on minimal watering, Stacie says. “When temperatures hit 85-degrees, I finally turned on the water for a couple of hours at night and gave the roots a deep soaking.” But she resorted to this method only four times between May and October.

In addition to saving natural resources, the easy-care plants are compatible with Stacie’s busy schedule. Like many baby-boomers, she wants to enjoy, but not constantly tend to, her garden. “I’m choosing plants that can care for themselves and accommodating the space they require to reduce the need for any pruning.”

This philosophy has led to judicious editing out of a few perennials that require extra attention like deadheading and dividing. “As this garden matures, I’m using only low-maintenance perennials that have seasonal interest and great fragrance,” she adds.

Stacie takes comfort in knowing that her pioneering design philosophy is beginning to inspire some to try a different way of gardening. Dwindling water supplies and global warming may influence others. “Eventually, everyone will have to garden the way I do – they won’t have a choice,” she says.

Lucky for us, she proves sustainable can be beautiful too.

This entry was posted on Friday, July 10th, 2009 at 10:40 am and is filed under Creativity, Gardening, Landscape Design, Plants, Writing. You can follow any responses to this entry through the RSS 2.0 feed. You can leave a response, or trackback from your own site.