What can we learn from a classic Tuscan garden? 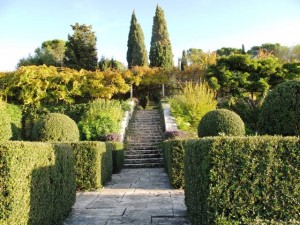 I’ve barely been home from Italy for 24 hours and despite jet lag, I am still alert enough to post my first report about the two week trip to Tuscany.

One of the most memorable days was our tour of La Foce, a Tuscan estate and garden with influences dating to the 15th century when the property was built as an Inn (“Osteria”) by the Hospital of S. Maria della Scala.  It is located in the town of Chianciano, about 30 minutes southeast of where we stayed in Montisi.

“Foce” (pronounced Foe-CHAY) means “opening” or “meeting place,” and its origins are traced to the Etruscans. The name refers to the osteria’s location as a stopping place where two prominent roads intersect. The roads were traveled by pilgrims, merchants and travelers who sought rest from their journeys at La Foce. 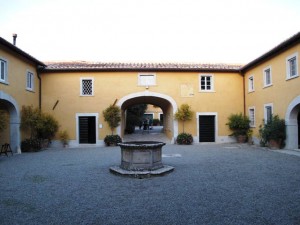 LA FOCE in the 20th Century

In 1924, Iris Origo, an Anglo-American writer, and her Italian husband Antonio purchased La Foce. They commissioned Cecil Pinset, an English architect, to enlarge the house and farm, restore old farmbuildings and create a garden. The remarkable couple invested their lives in this region, creating lifelong connections with the people who lived on the land. They built a school and dayhospital and used the many restored buildings for housing local farm workers. Origo’s autobiography, Images and Shadows, Part of a Life, documents the half-century development of this magical Tuscan estate.

Today, La Foce is in the hands of Iris and Antonio’s two daughters, who open the grounds on a limited basis for tours. Seattle garden writer and friend Marty Wingate set up the tour for us, but at the very last moment she was unable to come on our trip to Tuscany. We thought of Marty often during our lovely tour and took as many photos as possible to bring home to share. 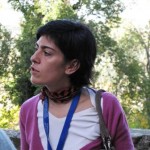 By the time we arrived at La Foce, we had already spent a few hours touring with Antonella Piredda, our personal Siena guide and new friend (Heading to Siena? You can contact her at antonella.piredda@live.it). Enchanted by her engaging Sardinian accent and perfect English, her cleverness and sense of humor as she told us the stories of Tuscany’s history that you can’t find in a guidebook, and our leisurely touring agenda, we were not quite prepared for the brisk pace and tight timeline maintained by the docent who greeted us a La Foce.

That dear woman had no idea what to do with all of us garden fanatics and our cameras. We did not stick to the program, but instead, wandered off to capture photos of the garden and home without people cluttering the frame. One glorious hour here was insufficient.

Whatever you feel about formal, clipped hedges and symmetrical lines, you can certainly gain inspiration from the proportions, scale and use of perspective in this magnificent garden.

Here are the lessons I learned that afternoon.

1. The best gardens reveal the “Double Human Inclination of Formality and Informality.” 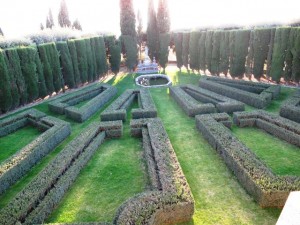 Okay, this is amazing. In 1939, just before the war, the formal lower garden was created with double-box hedges leading to a low, travertine pond.

Ponder this notion. I actualy wrote it down in my little moleskin notebook and then re-read it a few times. Our La Foce guide, Bernadetta, uttered these words as she described parts of the cultivated landscape. Wow – they started to make a lot of sense.

As I tour and study a vast array of gardens — ranging from famous estates to humble city parcels and in between — I can see what she means.

Whenever you have informality, you have to add structure, lines, mass or symmetry of some kind. Otherwise, that informality looks like a wild, disorganized mess. On the other hand, if your intent is to have formality, you need to soften it with natural, looser forms, usually conveyed by planting choices. Otherwise, the garden looks stiff and inhospitable. That balanced tension makes for a more appealing garden. (I could go on and talk about formality and informality in my life, but that’s another blog post!)

2. Green is the ideal garden palette. 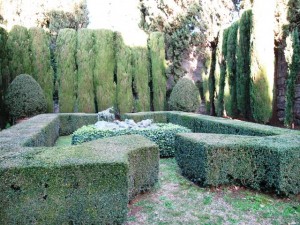 A tiny but powerful all-green vignette stands between the villa and the limonaia.

I know there is the whole trend of colored foliage, the “hot” garden, the “cool” garden, and all sorts of color theories revealed in planting combinations (analogous, complementary, etc.). But take a look at La Foce. The use of green has worked pretty well there for something like 85 years (and probably for centuries before Iris Origo arrived).

It is pleasing to the eye and excellent-looking in all four seasons. Clipped or natural, green is classic and you can’t go wrong with it. Nice to add touches of color here and there, but not essential — to my eye, at least. 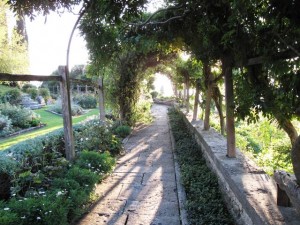 I have written ad nauseum about the notion of “framed views” and “focal points” as design concepts. But hey – here at La Foce, these ancient tricks reveal themselves with gusto. It’s all about how design choices intentionally lead the eye around and through the garden. Each path, each level, each angled or curved turn. . . is a device for drawing you through space both visually and physically.

As a result, the experience is more enjoyable. Like a journey that feels much longer and more evocative than the actual distance you’ve covered. 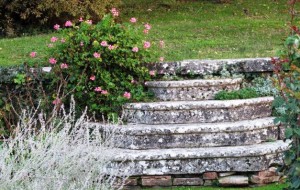 Various shades of lichen have turned stone steps into a lovely tapestry of hues.

I wrote about the idea of a timeless garden in my book, The Abundant Garden. It was my description of the late Anne Holt’s 50-year-old Bainbridge Island property. Every word I wrote in that chapter could be applied to La Foce, but multiplied by even more decades of time. If you have time to wait, your garden will reward you. Thoughtful planning isn’t always my forte (I subscribe to the notion that you can’t have instant horticultural gratification unless you plant a container garden), but the lessons at La Foce remind me what you can reap if you slow down, take time to consider design choices and just wait, watch, and enjoy the process.

Imagine staying and gardening in one place for so long that the trees are taller than the architecture, that the trunk of a wisteria vine is thicker than your wrist, that the stone takes on a gorgeous, not-to-be-rushed patina of moss and lichen?

That’s the vibe at La Foce. Here are several more images to delight your eyes: 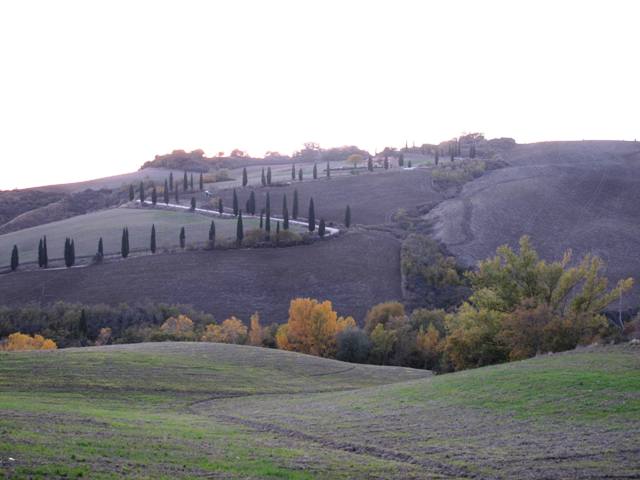 A view from La Foce of the zig-zagging, hilly drive, dotted with Italian cypress. It is the most-photographed scene in Tuscany.

Two enormous, dome-shaped Ilex trees stand on both sides of the loggia. The one on the right dates to 1924 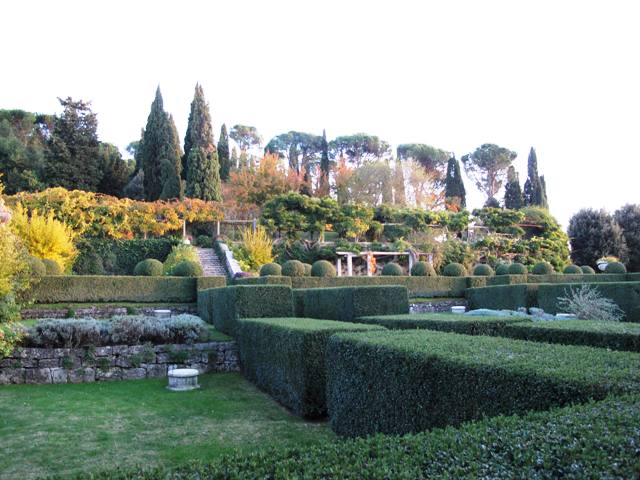 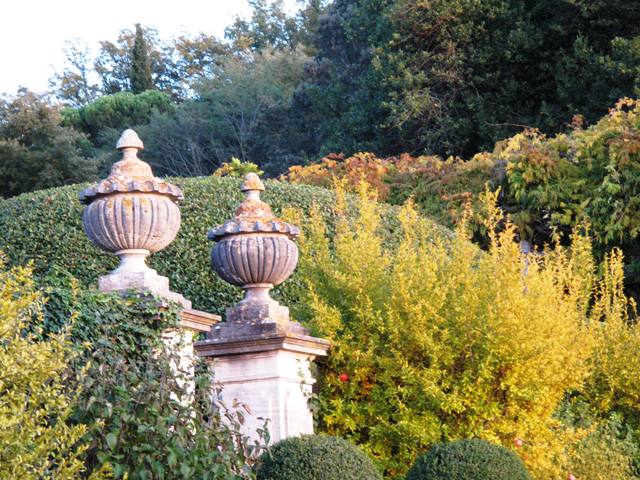 Two pilasters topped by Pinsent vases in travertine mark the entrace to the lemon garden, built in 1933. 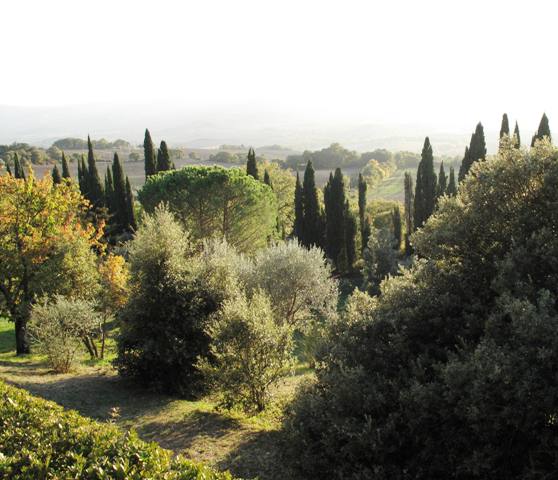 The panoramic view of Monte Amiata and the Tuscan valley. Who wouldn't have moved here and stayed for a lifetime? 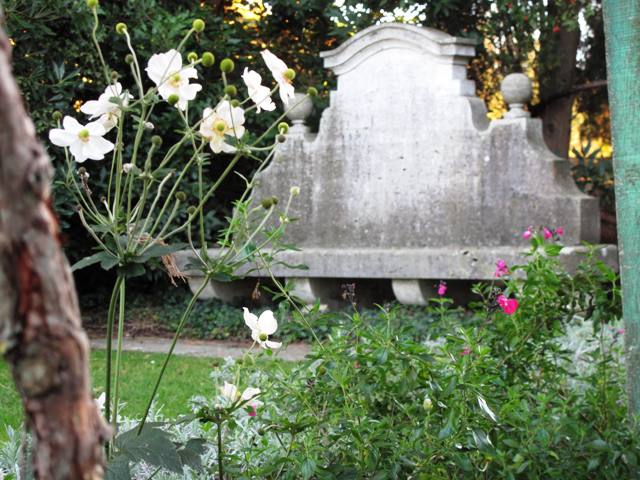 Discovered in the rose garden: an ornamental stone bench - as grand as the headboard on a princess's bed. 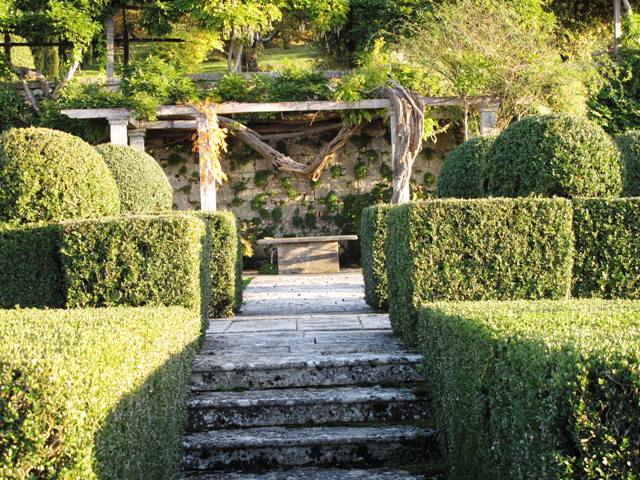 Formality in the foreground, this little scene caught my eye more than once. I took countless photographs of the stone table in the shelter of a wooden arbor. The portal-like opening in the hedges create a room-within-a-room 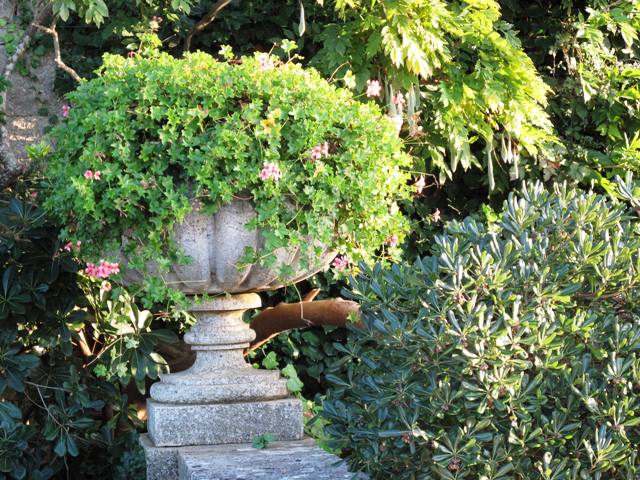 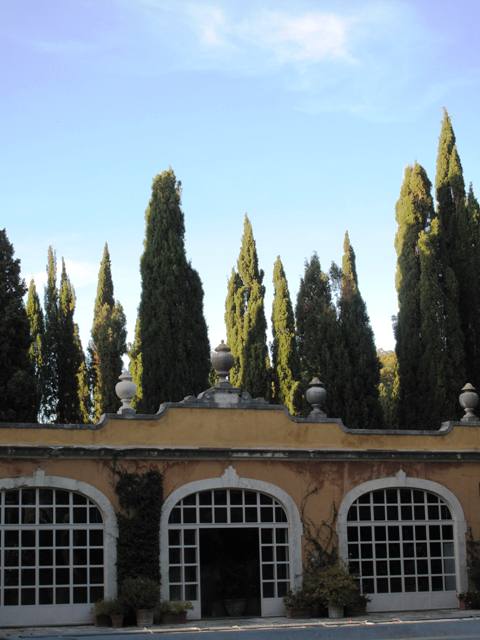 Pinset designed the Limonaia (orangery) after 18th century models. The potted lemon trees had just been moved inside for the winter, so we had to imagine them in the garden. 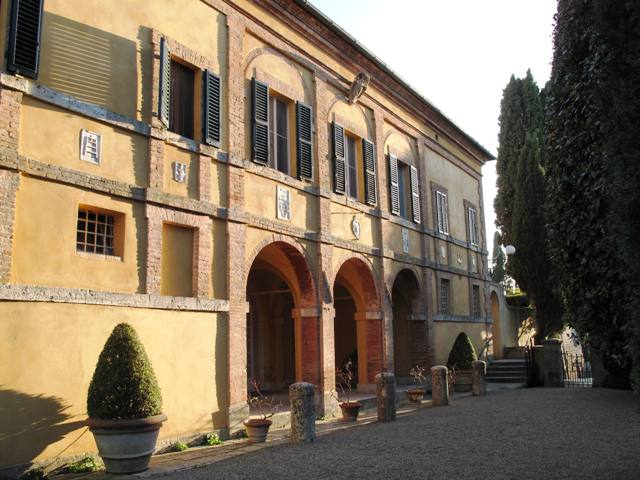 La Foce's facade is still as it looked in its "osteria" days, except for the upper loggia, which was closed up in the 19th century. Various coats of arms decorate the facade. 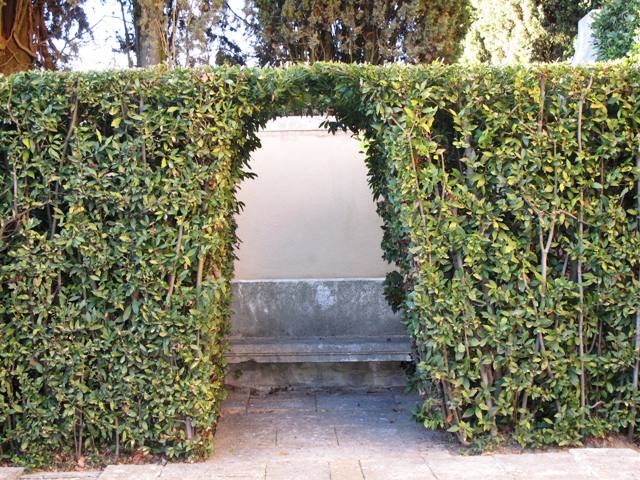 Intentionality. It's all about intentionality. Gardeners have spent years maintaining this clipped opening in a hedge, protecting a nearly-secret garden bench.

This entry was posted on Tuesday, November 10th, 2009 at 5:31 am and is filed under Architecture, Gardening, General, Landscape Design, Plants. You can follow any responses to this entry through the RSS 2.0 feed. You can leave a response, or trackback from your own site.

12 Responses to “What can we learn from a classic Tuscan garden?”