Zen of the Circle 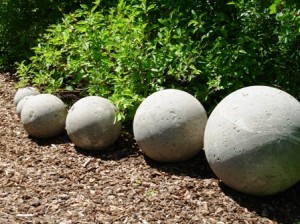 Graduated in size from tiny to large, a row of ornamental concrete orbs caught my eye at the edge of a path. We toured this lovely landscape on the Sawtooth Botanical Garden tour in July.

“Treat nature in terms of the cylinder, the sphere, the cone, all in perspective,” Paul Cezanne (1925)

“Everything an Indian does is in a circle, and that is because the power of the world always works in circles, and everything tries to be round. . . . “ Black Elk, an Oglala Sioux (Hehaka Sapa, 1961) 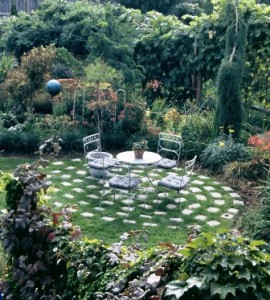 Cobblestones are embedded in a circular pattern to create a beautiful, uncomplicated lawn terrace in the Yakima, Washington garden of Kim Brewer and Rick Main

The image of a circle pleases the eye. In the garden, shapes that are rounded, organic, and sensual resonate as “good design.” They are visually satisfying, emotionally seductive, artistically whole. 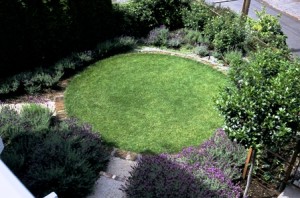 A perfectly round lawn, measuring about 14 feet in diameter, provides plenty of space for children to play in a well-designed urban garden (Langstraat-Wood design)

Circles also appear tidy, if that sort of thing matters to you. They can be formal, but circular shapes are also very contemporary-looking. For a fresh statement in the landscape, think about how you can apply or incorporate a rounded feature. With all the squarish blocks of architecture that occupy one’s life, the circle is a nice, soft antidote. 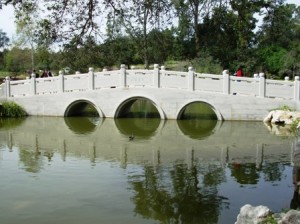 The reflection of arched openings in a stone bridge creates the suggestion of repeated circles. This is the “Jade Ribbon Bridge” at The Huntington’s new Chinese Garden

Anyone who enjoys touring gardens, going to design lectures and amassing volumes about the subject may, like me, have an instinct about the reason curves, rounded forms, orbs and spherical shapes are successful in the garden. I turned to my bookshelves to seek an explanation from others wiser and more experienced that me. I didn’t find a perfect “why circles are awesome” statement, but a few comments resonated with me: 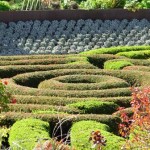 “Among the many and varied forms we see in the world around us, the circle stands out as being unique. Due to its simplicity and completeness, the circle has often been described as the most pure or perfect form.”

“. . . any line or form that directs the eye to a circle’s center will create a visually harmonious relationship with the circle.

“. . . lines and edges which form a 90-degree relationship to a circle’s circumference are more stable looking than compositions that lack this relationship.

(from “Residential Landscape Architecture,” by Norman K. Booth and James E. Hiss – the textbook used by the late Bud Merrill)

Spheres are circles in the third dimension. My college textbook, “Design Through Discovery,” is a very basic introduction to these classic elements used by artists and designers. Author Marjorie Elliott Bevlin writes: 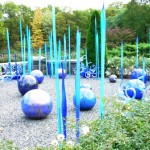 “. . . the sphere is somehow a satisfying mass. Globes, rubber balls, and the earth itself – all are spheres. Most people, when they pick up a lump of clay or dough, automatically form it into a sphere. . . .  A sphere nearly always implies movement and time.”

Half-spheres have their place, as well. They echo many forms we see in nature, from a gentle hill to a smooth stone. When used in multiples, these convex shapes create a pleasing rhythm. 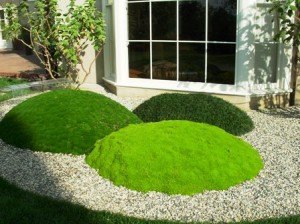 Isn’t this a pure and simple use of the rounded form? These domed mounds of Irish moss, Scottish moss and green dwarf mondo grass appear in a Japanese-style gravel garden in Southern California.

The gurus of Architectural Philosophy who wrote “A Pattern Language,” the definitive tome on how people and places relate, have this to say about circles (from ch. 185-Sitting Circle): 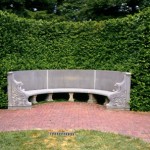 “When people sit down to talk together, they try to arrange themselves roughly in a circle. . . . Perhaps one reason for the circle, as opposed to other forms, is the fact that people like to sit at an angle to one another, not side by side.”

[Photo: A curved bench invites intimate conversation at the edge of a similarly curved path, from Longwood Gardens, 2007]

John Brookes, the British garden-maker who has authored countless books on landscape design practices (I was lucky to attend a one-day workshop with him in 2000), recommends the use of curves and other organic shapes in the landscape: 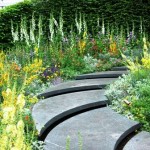 “Make your curves strong. A thin wiggle looks simply like a crooked straight line. Look at natural plant forms – you will see that they are generally strong and bold.”

In his new book, “The Essentials of Garden Design” (Knopf, 2008), Brookes continues: 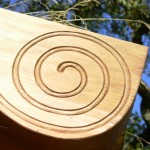 “Curves can be geometrical or flowing. I think that curves should still employ a geometry in their conception rather than be free-shaped wiggles.”

[Detail of a Norwegian-inspired decorative carving on a redwood dining pavilion in Northern California; from Stylish Sheds and Elegant Hideaways.]

I guess the most powerful argument for using a circle is its wholeness. When we see round shapes, curved lines, concentric circles, spirals, spheres, orbs and balls, the scene feels balanced and complete. Whether miniscule in size or with planetary proportions, there’s a lot of power in the perfect circle. Here are a few other circular images I’ve collected on my journeys. I hope that you’re inspired to start dotting your own landscape with this shape. 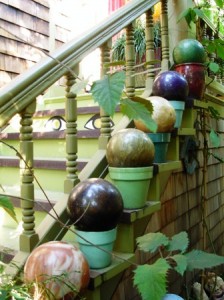 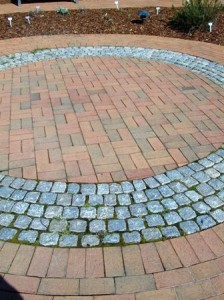 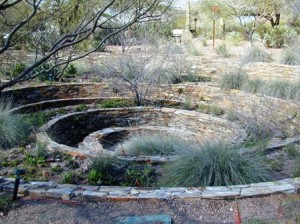 A sunken stone spiral landscaped with Arizona native plants, at the Desert Botanic Garden in Phoenix

This entry was posted on Wednesday, August 6th, 2008 at 5:40 pm and is filed under Architecture, Creativity, Gardening, Landscape Design. You can follow any responses to this entry through the RSS 2.0 feed. You can leave a response, or trackback from your own site.

8 Responses to “Zen of the Circle”