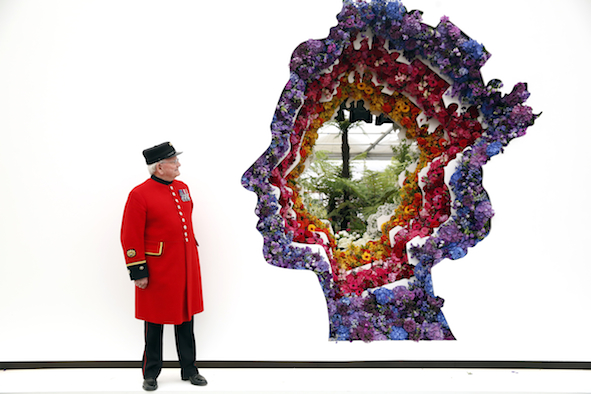 ·      The Flower Market travels a mile up stream to the RHS Chelsea Flower show to win Chelsea Gold & New Design Award with design by Veevers Carter, one of London’s most innovative floral design and  event styling companies

In its first ever Chelsea appearance as an exhibitor, New Covent Garden Flower Market has scooped an RHS Chelsea Gold medal and the New Design Award for the dramatic floral installation – ‘Behind Every Great Florist’ – that is taking the RHS Chelsea Flower Show by storm, and making the news pages worldwide.  Designed and created by Veevers Carter, one of London’s leading florists, event companies and a devoted customer of the Flower Market, the exhibit illustrates the close ties that bind Flower Market traders and their customers in flowering London and is a spectacular tribute to HM the Queen.

Why is this so cool?

Well, the Flower Market’s expert wholesalers have been quietly supplying the cut flowers, foliage, plants and floral sundries for award-winning Chelsea show gardens and exhibits for decades, but had never exhibited before this year. Every single stem on the ‘Behind Every Great Florist’ installation has come from the flower and foliage wholesalers at New Covent Garden Flower Market, including beautiful British-grown flowers.

“We are absolutely thrilled and proud to have won a coveted Chelsea Gold medal and the RHS Chelsea New Design Award on our first ever exhibit at the show,” said Helen Evans, Director of Communications at Covent Garden Market Authority (and past guest of the Slow Flowers Podcast–listen to our interview here).

“We wanted our exhibit to highlight the vital relationship between London’s iconic wholesale Flower Market and the talented independent florists who flower London. As a devoted customer of the Flower Market for over three decades, Veevers Carter instantly understood the concept and their design for ’Behind Every Great Florist’ encapsulates this in a spectacularly creative way.”

“We are absolutely overwhelmed that our installation for the Flower Market has been awarded not only an RHS Chelsea Gold medal but also the New Design Award,” said Ming Veevers-Carter, Creative Director of Veevers Carter. “’Behind Every Great Florist’ has been such an exciting and inspirational project, and our combined creative team of florists, designers and production staff have worked incredibly hard over the past six months to make it a reality. The response to our Chelsea debut has been just staggering, and I am so proud of what we’ve achieved.” 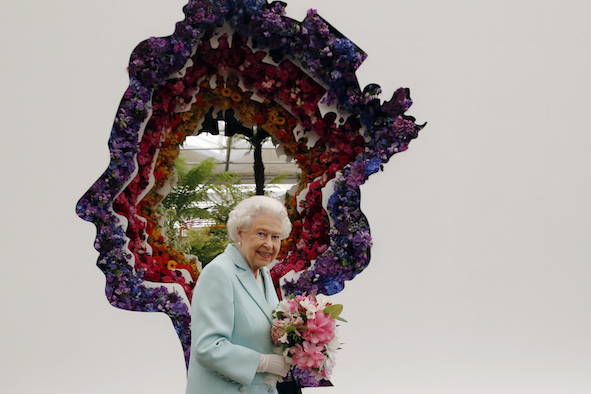 Britain’s Queen Elizabeth views a floral tribute to her for her 90th anniversary, desinged by florist Veevers Carter, on the New Covent Garden Flower Market stand at the RHS Chelsea Flower Show 2016 in London, UK Monday May 23, 2016. RHS / Luke MacGregor

On the Royal tour of the RHS Chelsea Flower Show, New Covent Garden Flower Market was honoured by a visit by HM the Queen, who was photographed in front of her three-metre-high floral portrait, containing 10,000 cut flowers and and foliages. 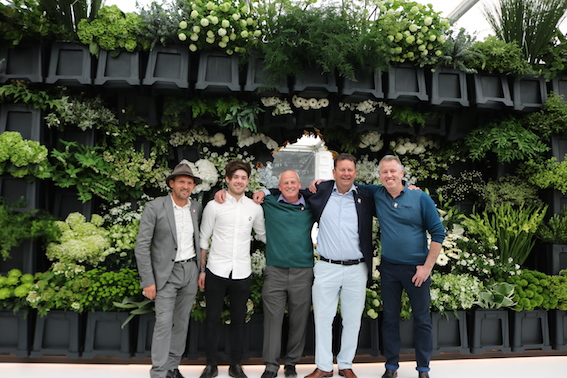 The opposite side of the New Covent Garden display is covered top-to-bottom with buckets of flowers and foliage, as you would find on the floor of the wholesale flower market.

‘Behind Every Great Florist’ is the story of two sides intrinsically bound together in flowering London: London’s famous wholesale Flower Market on one side and its customers, independent florists, on the other. On the Market side, the Flower Market is represented in a vast wall of 112 market buckets, iconic symbols of the Flower Market, each densely packed with fragrant green and white flowers and foliage echoing the massed displays at New Covent Garden Market. The uniformity of the rows breaks down towards the middle, as the buckets and flowers are pulled into a central core. Emerging on the opposite side, the Florist side, the flowers erupt in a breathtaking riot of colour; tiers of fragrant floral tapestry forming the iconic portrait of HM the Queen, representing the exquisite craft and creativity of London’s great florists.

New Covent Garden Market is currently going through an exciting redevelopment project. It will see the Flower Market relocate a few hundred metres down Nine Elms Lane where work has already started to build a new, better home for flowers. The new Flower Market will open in January 2017 and will ensure the wholesalers continue to flower London, and the RHS Chelsea Flower Show, for many years to come.

Veevers Carter is one of London’s largest and most prestigious floral design and events companies. Established in 1984 by Ming Veevers Carter, the company has a fully-fledged team of florists, designers and operational staff that, alongside their sister company Event Concept, can realise an event of any size to an exceptional standard.

Veevers Carter works with some of London’s most sought-after venues and have built an enviable client list of corporate organisations, event organisers and private individuals both in the UK and internationally. This is among one of the most exciting projects the two companies have ever worked on.

This entry was posted on Tuesday, May 24th, 2016 at 8:56 am and is filed under Blog Posts, Creativity, floral design, Flower Farming, General, Plants. You can follow any responses to this entry through the RSS 2.0 feed. You can leave a response, or trackback from your own site.