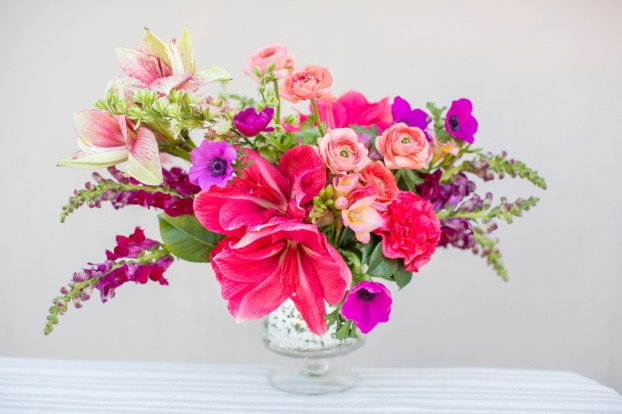 Bess Wyrick of Celadon & Celery says, “I consider each season in terms of which flowers and branches I can get my hands on! For Valentine’s Day, I turn toward spring. Women love receiving the unexpected, so look for arrangements that are made with unusual flowers, grown locally on American flower farms. Bright, colorful arrangements adorned with ribbon and silks are a fresh alternative to a dozen imported red roses.” The arrangement above was created using only California-grown red amaryllis, burgundy snapdragons, purple anemones, pink ranunculus, pink freesias, camellia flowers and camellia leaves. (Photo: Laura Grier, Beautiful Day Photography)

**Note: this press release was distributed nationally via PR Newswire today – in anticipation of the news media’s Valentine’s Day reporting

SEATTLE (Jan. 13, 2015) – This Valentine’s Day, Slowflowers.com urges consumers to rethink how they celebrate and woo by supporting local farmers and florists with sustainable, American-grown bouquets.

The flower market is booming! Retail value of U.S. cut flower sales totals $7-8 billion annually, but of the 224 million roses sold in 2012, only two percent were American-grown. Nearly 500 Slowflowers.com florists committed to sourcing U.S. grown flowers have sights set on Valentine’s 2015 to take back business that has for decades belonged to 1-800 tele-florists and the imported flowers they distribute.

The battle begins in Miami where its international airport receives 80,000 – 120,000 boxes of flowers per day during Valentine’s week. Ecuador has the largest share with U.S. growers nabbing only two percent of the market, behind Canada. On the heels of the successful farm-to-table movement, Slowflowers.com is racing to galvanize support for its farm-to-vase crusade. Valentine’s 2015 is positioned as an industry coup, where the country’s most progressive Slowflowers.com florists are turning down 1-800 orders that flood their businesses every February – opting instead to meet demand with artistic pieces using only domestic flowers and foliage.

Debra Prinzing, founder of Slowflowers.com and consumer spokesperson for the Congressional Cut Flower Caucus, says sweethearts will select American-grown if given the option. “Fifty-eight percent of consumers would rather purchase domestic flowers if given the choice. Valentine’s sees millions of roses arrive via Jumbo Jet with a shelf life of just days,” she says. “Even if ‘American-grown’ is not a concern, buying fresher flowers should be.”

Christina Stembel, Slowflowers.com florist and owner of San Francisco’s Farmgirl Flowers, has built her business using only California-grown flowers. “The entire process of ordering from the big guys feels like you just got conned,” says Stembel. “We’re pledging flowers that are fresh, local, beautifully designed, and thoughtfully delivered.”

The Origin Matters push from the California Cut Flower Commission is hoping to change flower-giving this season by placing Valentine’s 2015 into the hands of florists committed to domestic flowers. “We are ready to prove Slowflowers.com bouquets and arrangements are far better than imported alternatives,” says Prinzing. “It’s time to show your love with local flowers.”

This entry was posted on Tuesday, January 13th, 2015 at 5:38 am and is filed under American Grown, Blog Posts, Creativity, floral design, Flower Farming, Slowflowers.com the Directory of American Flowers. You can follow any responses to this entry through the RSS 2.0 feed. You can leave a response, or trackback from your own site.

One Response to “Slowflowers.com Florists ‘Take Back’ Valentine’s Day From Tele-florists With Sustainable Choices”