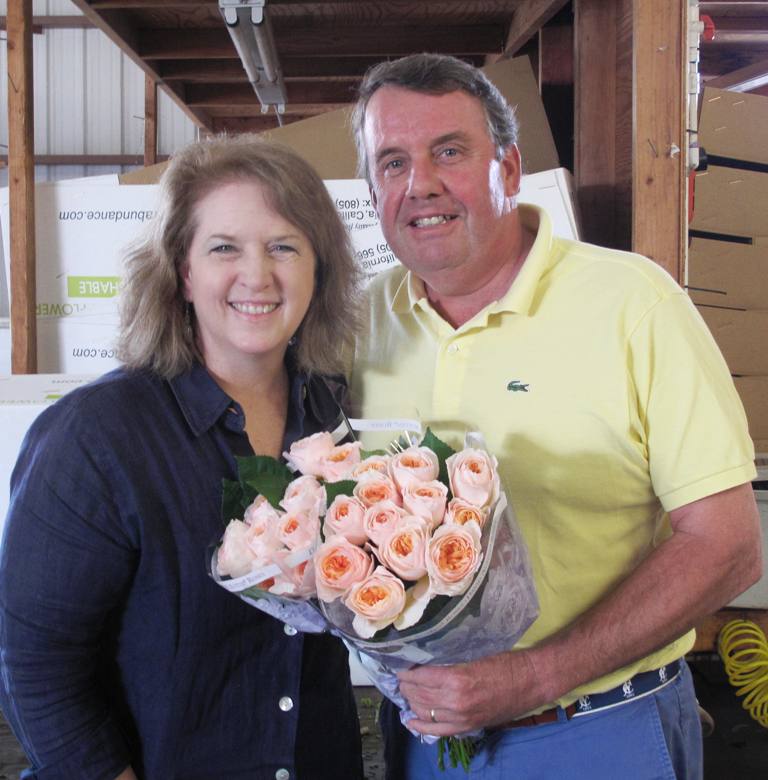 Over the past several weeks you’ve heard my conversations with floral designers who are leading the way when it comes to sourcing their flowers, leaves and branches from local farms. They place high value on seasonal blooms, because they know their bouquets and arrangements will be all the more beautiful and cherished by the customer – a customer who is also asking, Where do my flowers come from?

Yet many of these florists whose operations are not large enough to guarantee sizeable orders or meet minimum purchase requirements face a dead-end when they ask their local wholesaler to provide domestic or locally-grown product.

The wholesaler is basically a broker, an agent between the grower and the designer. The way the wholesale florist makes money is to buy low and sell high. I know this is an essential truth in any modern-day distribution system, but – to me – it can lead to a situation where the wholesaler holds all the power to set price, to determine what is brought to market, to manage the flow of goods from producer to end user. And in floral, over the years, that set up has led to a near-total obscurity of sourcing and certainly NOT truth in labeling.

It has been close to impossible for designers seeking flowers from the wholesaler in their town to ever know WHERE those flowers came from or WHO grew them, let alone what growing practices were used.

This model is only beginning to change. As we heard from Foxglove Brooklyn and The Local Bouquet, two studios featured in recent episodes, their big breakthroughs occurred when a light bulb went off in the mind of their wholesale florist. The energy and enthusiasm these designers express whenever they can source American grown flowers has stimulated a shift in thinking at the wholesaler. It might not even be the owner of that wholesale business who gets it, but perhaps an enterprising salesperson or account manager who says: “Ah ha! I get it – they want more local product and If I can source it – my sales will increase.”

So . . . in the coming months, in an effort to crack the code and inspire more wholesale florists to “see the way to the future,” I’ll be featuring conversations with the ones who are committed to transparency in their sourcing practices.

Today, we’re kicking it off with Joost Bongaerts, owner of Florabundance in Carpinteria, California.

Joost has been involved in the horticulture and floral industry his entire life – and through Florabundance he sells flowers to retail florists and designers all around the country.

Located as they are in the flower-basket of the U.S., Florabundance has the unique ability to source from small and large flower farms in California and in many other states on an almost a year-round basis.

I applaud Joost for labeling all of the CA-grown options on the Florabundance web site. In the future, we should see other wholesalers adopting this practice. And next, we’ll urge them all to identify other states, as well as use the soon-to-launch American Grown Flowers logo.

Here’s a little more about Joost and his background:

Born in 1959 in Den Hague, The Netherlands, Joost grew up in Holland. His father managed agricultural land holdings all over the country. Joost spent summers working on his family’s farm in northern Holland and became interested in agriculture and horticulture as a result. He attended The Land en Tuinbouw School in Dordrecht and continued his education in Gouda, graduating with a degree in plant science.

Joost also spent a semester at Michigan State University as part of an exchange program, which led to his desire to work and live in the United States. Joost began his professional career in 1981, marketing fresh cut flowers from Holland for The Dutch Flower Auctions & Exporters Organizations which was located in Livonia, MI.

From 1983 to 1991 Joost worked for several Dutch companies selling flower bulbs and perennial plants to specialty cut flower growers in the United States and Canada.

In 1991 Joost and his wife Alexandra opened BonFleur, a European-style retail flower shop in New Canaan, CT, which they sold to their manager in 2002. During this time Joost also imported flowers from Holland and started to do business with Florabundance, becoming a partner in 2002 and eventually full owner in 2008.

Joost’s background and experience in selling flower bulbs to growers, importing cut flowers and running a successful retail flower shop provides a unique perspective from which he has developed the Florabundance brand into one of the premier wholesalers in the United States.

Here’s a bonus feature: a UBloom episode about Florabundance, produced by J Schwanke for his California Grown Experience video series.

I predict that by sharing my conversations with “floral middlemen,” three things will happen in the coming months and year:

1. Other wholesalers will begin to hear the buzz – and they’ll be curious about the successes of their peers like Florabundance’s Joost Bongaerts.

2. More florists will point to these examples and nudge along their own wholesaler, asking them to source domestically, seasonally and locally – for good reason.

3. The consumer will benefit – and have more confidence in the purchases he or she makes.

Please send me your suggestions for who you’d like to hear from on future episodes of the Slow Flowers Podcast.

And tune in next week to hear from a special guest. Author Amy Stewart, who wrote Flower Confidential in 2007, will join me for a conversation about that groundbreaking book. Don’t miss it!

Because of the support from you and others, listeners have downloaded episodes of the Slow Flowers Podcast nearly 11,000  times! I thank you for taking the time to join to my conversations with flower farmers, florists and other notable floral experts.

The Slow Flowers Podcast is engineered and edited by Andrew Wheatley.

This entry was posted on Wednesday, April 30th, 2014 at 5:40 am and is filed under American Grown, Blog Posts, Creativity, floral design, General, Podcast Episodes, SLOW FLOWERS Podcast. You can follow any responses to this entry through the RSS 2.0 feed. You can leave a response, or trackback from your own site.