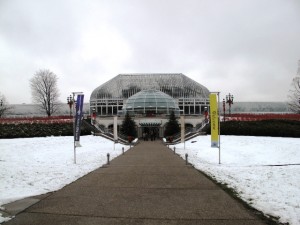 In a setting of snow on the last day of 2009, the Phipps Conservatory makes a grand statement

An amazing garden under glass, The Phipps Conservatory is a delightful destination in the heart of urban Pittsburgh.

But once we walked indoors, of course, the “season” changed. Blooms more likely to be seen in my Los Angeles backyard were thriving in the conservatory’s dozen-plus “rooms,” including the tropical-like Palm Court, Fern Room, Orchid room and Sunken Garden.

The Desert Room looked oh-so-familiar to me, with agaves, aoeniums, aloes and opuntias poking through the sand-colored gravel floor. 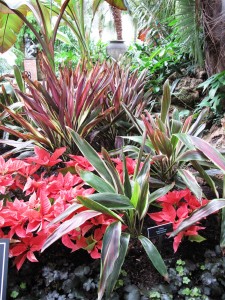 This was a new combination to me: Ti plants (Cordyline sp.) with Poinsettia

I visited on New Year’s Eve day and was delighted to learn that the Phipps actually remains open until 10 p.m. on New Year’s Eve, welcoming those more interested in a serene, candlelit celebration than louder festivities.

Right now, many of the plant displays here are dotted with glass sculptures by an artist named Hans Godo Frabel, who is know for his “realistic and otherworldly glass figures.” 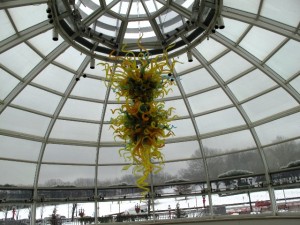 Glass of a different sort was presented here in the past – the Dale Chihuly sort – and a few of his pieces remain in the permanent collection, which my photos show here.

My son Alex, who is 12, was very intrigued by Frabel’s alienlike glass creatures, as well as by his realistic glass flowers and salamanders. We took lots of “alien” photos. 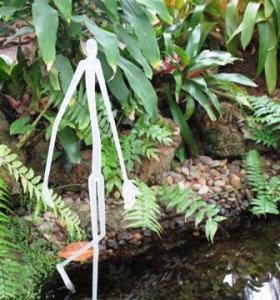 One of the eery glass aliens by Hans Godo Frabel

Fortunately, these disparate works of art were grouped together to present little stories in distinct wings of the conservatory. Otherwise I would have been completely confused.

“Phipps Conservatory is a reminder of Pittsburg’s greatness in the time when Andrew Carnegie and Henry Phipps helped transform the American landscape with steel, steam engines, and civic philanthropy. Among his many contributions, Phipps (1839-1930) gave the city a conservatory “for public instruction and pleasure” in the newly developed Schenley Park.

When it was built, the Phipps Conservatory was the largest of its kind in the country. The shimmering Romanesque-style edifice made of steel, cypress, stone and glass reached 64 ft. tall and covered more than 43,000 square feet. It was originally filled with plants chosen at the World’s Colombian Exposition in Chicago. Writes Cunningham: “. . . the entire tropical plant display was shipped by train across the Midwest in time for the debut of the conservatory.”

From the height of fame to unfortunate neglect, this place barely survived subsequent decades. Sadly, the glorious conservatory fell into disrepair during the Depression. According to Cunningham: “by the 1930s, rats and weeds competed for space; a savage storm in 1937 damaged the big glasshouse and destroyed the greenhouses in back. By 1940, WPA crews had reconstructed the production houses, but the conservatory continued to suffer from natural deterioration and inconsistent community support.”

The Phipps’s renaissance  came in 1993 when a private foundation purchased it and began to restore and revive the grand garden under glass. The Phipps seems to have come full circle with the 2009 highlight of hosting President and Mrs. Obama and the G-20 summit last September. The conservatory was the site of the opening dinner and reception for the world’s leaders. How wonderful that a garden was the backdrop for this powerful gathering.

The rebirth of this grand conservatory is indeed cause for celebration. Here are some impressions from our visit last Thursday: 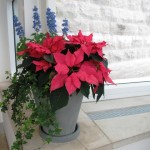 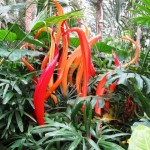 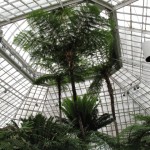 Oh how we envy the towering tree ferns 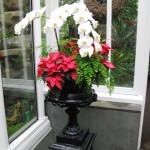 This is elegant: a red poinsettia + white orchid + green maidenhair fern in a black estate urn 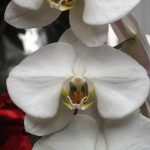 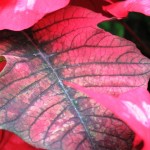 For some reason I loved this poinsettia’s green-red marbling 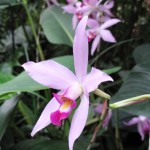 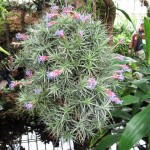 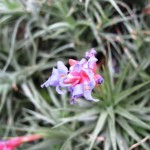 A delicate little flower, in sweet pea colors, blooming on a tillandsia 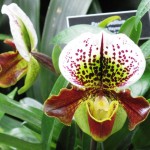 another gem in the Orchid Room 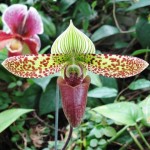 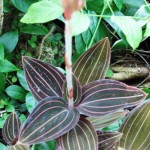 True confessions: I don’t recall the name of this hothouse plant, but I sure love its stripy foliage

This entry was posted on Wednesday, January 6th, 2010 at 10:37 pm and is filed under Architecture, Book reviews, floral design, Gardening, General, Landscape Design, Plants. You can follow any responses to this entry through the RSS 2.0 feed. You can leave a response, or trackback from your own site.

4 Responses to “Gardens under glass”