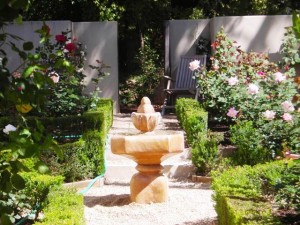 Last week, I toured the 3/4-acre landscape owned by Cheryl Bode and Robin Colman, a lavish garden developed over the past 10 years in the foothills of the San Gabriel Mountains.

Tomorrow, April 26th, they are generously sharing their lush and serene property as one of six private, residential landscapes on the Altadena Garden Conservancy Tour.

My story, “Botanical bounty in Altadena,” about Cheryl and Robin’s abundant landscape, appears in today’s edition of the Los Angeles Times.

Since we had to cut the original piece due to space, I have included the full story below.

Take a virtual tour through this web gallery of photos from my visit: 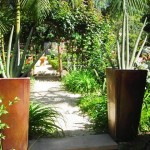 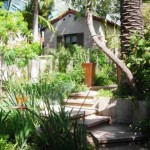 Layers of the garden surround the original home 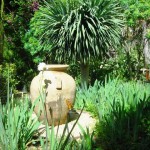 A vignette: A clay urn juxtaposed with a dragon tree 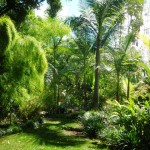 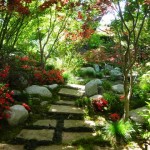 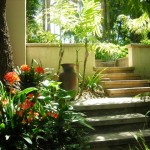 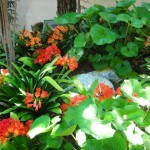 A collection of beautiful clivia, planted with shade-loving ligularia 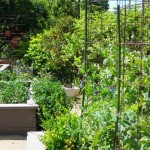 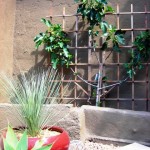 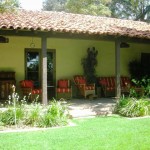 The 1925 Spanish Colonial Revival home has a deep, covered veranda 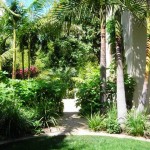 Carved into an oval, the lawn doubles as a dance floor 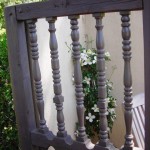 Cheryl found salvaged spindles and repurposed them into an entry gate

Here is my original story. Enjoy a peek into the lives of two who are passionate about the place they possess:

Prompted by the desire for more space as they combined their individual households, the two Pasadena residents considered buying in nearby Altadena, a village in unincorporated Los Angeles County wedged between Pasadena and the foothills of the San Gabriel Mountains.

“Cheryl went to Altadena on a lark with our real estate agent,” Robin recalls. “This house was in terrible shape, but part of it really captivated her.” Later, when Cheryl returned with her partner in tow, she couldn’t help jumping up and down with happiness when Robin pronounced: “I could live here.”

Convinced that they could save the aging 1925 Spanish Colonial Revival-style home and tame its landscape, Robin and Cheryl spent a decade returning it to a place reminiscent of Altadena’s historical roots. In doing so, they, too, have become rooted in the community. “It feels like you’re taking a step out of the hustle and bustle of city life,” says Robin, a vice president at eBay Inc., who commutes to Silicon Valley each week.

The 4,000-square-foot, traditional stucco-and-red-tile-roofed structure needed extensive interior and exterior renovation. Much of the land once attached to the house had been subdivided and sold over time.

For help with the remaining three-quarter acre grounds, Cheryl and Robin turned to Altadena landscape designer Thomas Batcheller Cox. The women didn’t consider themselves gardeners, but they knew the overgrown and debris-strewn yard needed to be cleaned up and redesigned.

“We had no idea what we were taking on,” says Robin. “We love it now, but we didn’t come in with our eyes wide open.”
For Cheryl, who retired in 2004 from a career in health care administration, the move has transformed her into a plant-lover who enjoys collaborating with and learning from Cox and landscape contractor Tim Foster of Chaparral Landscaping. Cheryl scours local nurseries for just the right flowering azaleas and rose cultivars. She rattles off botanical names like a horticulturist and tends tomatoes, strawberries, and beans in the sunny kitchen garden. “I came to learn that I had a passion for gardening,” she says.

Cheryl re-imagined a new garden worthy of the home’s origins. The restored residence has a deep, covered veranda that overlooks a strolling lawn, several outdoor dining areas and a formal pond. “We wanted it to look as if everything belonged here and was built by craftspeople from the 1920s,” Cheryl explains.

The spirit of that ethos begins in the walled rose garden, planted along the home’s east side in an area once covered in asphalt. A gate built from turned spindles (echoing the home’s original window trim) provides entry. Sand-colored Santa Rosa gravel crunches underfoot as you walk along the path, sidestep a small bubbling fountain at its center, and inhale the perfume of 32 rose shrubs (“I only grow roses that have fragrance,” Cheryl says.)

Stone ledges tilted on their sides form the risers of simple gravel steps. The staircase leads to a lower garden populated with nearly-hidden seating areas. Even though this side of the landscape borders a well-traveled boulevard, it is quiet and feels private, thanks to a “living fence” of evergreen pyracantha shrubs, their espaliered branches supported by cables strung between metal fence posts.

The renovations preserved as many old trees as possible, including several deodar cedars and sycamores. A vintage orchard has been nursed back to health, although it took five years of proper irrigation and feeding for many of the citrus trees to resume fruit production.

A diverse plant palette now enhances the gently sloping property and includes palms, Camellia sasanqua shrubs, a rice paper plant (Tetrapanax papyrifer), an African cabbage tree (Cussonia paniculata), a pair of potted Sansevieria cylindrica “Skyline” v. angolensis and several rare birds-of-paradise (Stretlitzia junceas). This botanical collection thrives in what Cheryl describes as Altadena’s unique microclimate. “Our summers are very hot; our winters are cold. The topography is such that we’re often encased in clouds in the winter.” Temperate-climate plants that won’t grow in Pasadena seem to perform better in Altadena, she contends.

The oval-shaped lower lawn doubles as a dance floor for outdoor parties and is lined with graceful swaths of Mexican weeping bamboo. Beyond it, stepping stones lead towards the deep shade of sycamore trees. Here, a restored pond is landscaped with ferns, hellebores, mondo grass and a trio of golden ginkgos, planted to commemorate Cheryl’s late mother. The colors of spring appear: overhead in the blood-red foliage of several Japanese maples and at one’s feet, in the salmon-pink flowering azaleas that line the path. Dappled sunlight animates the scene and it’s hard to imagine anyplace more peaceful.

“I don’t even really want to take vacations anymore, because it’s so beautiful here,” says Robin. “I come back on the weekends and I love just being home.”

Because the women feel they are stewards and caretakers of this special place, they frequently share it with friends and host benefit dinners for favorite charities. “We’ve been given the opportunity to return this ‘Grand Dame’ to how it was in 1925,” Cheryl adds. “It’s our way of being part of Altadena’s community.”

Admission: $5 per garden, payable at the gate (children under 12, free)

Along with five other private gardens in Altadena, the arboretum-like setting at Casa dos Mujeres will be open to the public tomorrow for the first of two Los Angeles area Garden Conservancy “Open Days.”

Each Open Day is organized locally by regional volunteers who identify noteworthy private gardens. According to Elena Shoch and Martyn Belmont, who co-chair the tour, this is the first time Altadena’s private gardens have been showcased. Among the gardens featured are “Wildwood Park,” created by famed Craftsman architect Henry Greene and “Tropicana Palms,” a one-acre, collectors’ garden featuring 130 species of palms from nearly every continent.

Proceeds from the Open Days program support the national preservation work of the Garden Conservancy, 888-842-2442 or www.opendaysprogram.org.

On May 9, you can tour six new gardens not previously featured by Garden Conservancy in Los Angeles. Highlights include gardens created by landscape architects Joseph Marek and Robert Steiner, garden designers Laura Morton and Sean Femrite, and postage stamp-sized urban Jurassic Park, inspired by the nearby La Brea Tar Pits.

Admission: $5 per garden, payable at the gate (children under 12, free)

On the day of the tour, maps and discounted admission tickets (a booklet of 6 for $25) are available, 9:30 a.m. to 3:30 p.m., at Pacific Design Center Plaza, 8687 Melrose Ave., Los Angeles, 310-360-6409 or www.pacificdesigncenter.com. Discount tickets may also be purchased in advance from Garden Conservancy.

This entry was posted on Saturday, April 25th, 2009 at 8:11 am and is filed under Creativity, Gardening, General, Landscape Design, Plants, Shed Glossary. You can follow any responses to this entry through the RSS 2.0 feed. You can leave a response, or trackback from your own site.