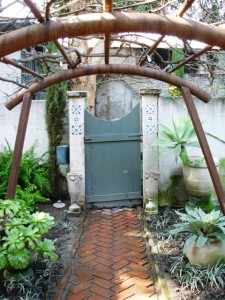 The gate leads to a Shed Surprise

If you’ve been following Shed Style for any period of time, by now, you know that I use the term “SHED” quite broadly to describe “a shelter in the garden.”

And so, here are two very different, but equally enticing, glimpses of garden shed architecture that I had the good fortune to tour earlier this week. The occasion: a preview of the Feb. 28th study tour that Betsy Flack of Garden Conservancy has designed to accompany the Feb. 27th seminar: Gardens that Re-Make Themselves.

The seminar will examine the restoration of historic gardens to reflect the original architecture and period, as well as sustainable design practices that today’s garden makers can use to ensure their landscapes endure for future generations. Several really incredible established gardens, mostly in Pasadena, will be open to seminar participants who take the study tour.

The garden structures I visited are relatively new, but they were designed – in the spirit and character of the property’s origins – to fit into older landscapes . 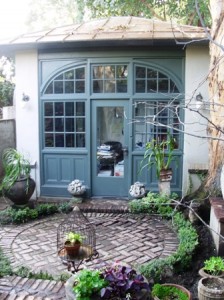 “M’s” Garden House stands at the back of a long, narrow garden in an historic Pasadena neighborhood.

The 1926 residence, a one-story Mediterranean-style bungalow, is situated near the front of the 50-by-195 foot lot. Because her house is closer to the sidewalk, the parcel behind the house is very park-like. She has preserved and enhanced the original hard-scape and bones of this Italian-inspired garden. It is truly amazing to see the setting and realize it is 83 years old.

At the far end of the garden path stands a scallop-topped swinging gate. According to the owner, the gate originally led to an old tool shed for garden storage.

But she had other plans for this underutilized space and asked her architect to design a garden structure in keeping with the garden’s vintage.

Hugh Maguire, an architect who does work in Pasadena and Palm Springs, designed the 11-by-13 foot structure in1995. “I had seen an old English train station ‘storefront’ at a salvage place in Pasadena,” Maguire told me when I contacted him by phone. “It had the words ‘Waiting Room’ on it” 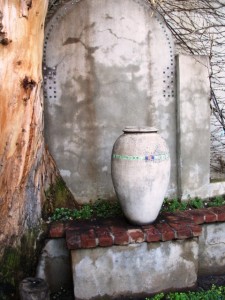 An urn, in the garden court

He thinks the fanciful storefront dates to the 19th century.

Maguire discovered it years ago at Across the Street from Alice, a Mission Street salvage dealer and has had his eye on it ever since.

M’s request for a garden structure presented the perfect opportunity to use the beautiful architectural element with mullioned windows, an arched transom and detailed mill-work panels. Maguire spent around $1,200 for the salvaged facade. “Can you image what it would cost to have something like this custom made?” he asked me. No, I can’t. And that’s why I love it when designers and builders utilize materials from the past. Salvaged architectural fragments are a high art form when it comes to shed-making.

In order to build this pleasing space, a “collapsed shed” was removed. However, architect and client salvaged doors from the old structure and recycled them as cupboard doors on interior bookcases. In between the bookcases is a perfect-circle porthole window. It echoes the perfect-circle recycled brick “carpet” that now serves as the garden foyer to the little house. 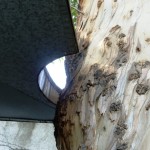 On top of the new stucco building, Maguire added a standing seam metal roof. In one corner of the four-sided roof that caps the garden house, they had to make a cut-out – to accommodate a stately eucalyptus tree that M did not want disturbed by the construction. That’s showing serious concern for her garden and the plants she inherited! 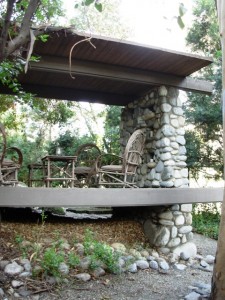 The second shelter-shed I visited is from a different architectural era altogether. It was designed by architects Conrad Buff and Donald Hensman in 1993. Carol Soucek King, its intuitive and creative owner, calls the structure a “gazebo.” It is far from a wimpy, ultra-feminine Victorian gazebo. This is a rustic, natural edifice that is situated at the upper edge of a creek.

Using local Arroyo Seco river rock for the foundation and side wall (notice the wonderful niches that allow for pedestal candles – imagine how meditative this space will feel at twilight!) and leaving the structure covered, but open-sided, the design is a study in native, organic architecture.

According to Carol, when the gazebo’s construction was completed, the builder, stone mason and architect gathered with the Kings for a Bento box lunch “to bless it.”

“We all sat here and were very conscious that this would be a sacred place,” she told me.

In a magnificent book about Buff and Hensman’s architectural careers, the structure is described as a “lineal redwood gazebo” . . . “conceived as a refuge.”

A refuge indeed. No one could wish for a better way to experience sanctuary, solace, spiritual respite and beauty.

Here are a few more images: 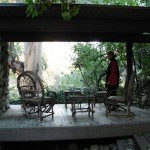 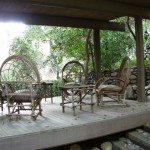 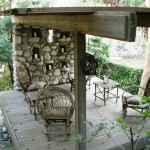 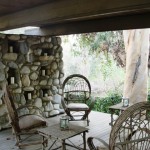 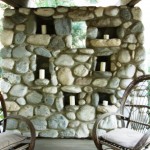 This entry was posted on Saturday, February 14th, 2009 at 11:41 pm and is filed under Architecture, Creativity, Landscape Design, Sheds & Havens. You can follow any responses to this entry through the RSS 2.0 feed. You can leave a response, or trackback from your own site.

3 Responses to “Shed Spotting in Pasadena”