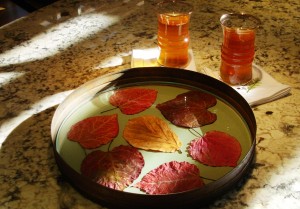 You spy a weathered castoff, a tarnished this or a timeworn that. What is the first thing that comes to mind? “Don’t throw that away! I can find a good use for it.”

The designer’s mind will recycle, reinvent or re-imagine the piece of “junk,” giving it a new purpose as an object of style. Read on for the first installment of a new column that features local designers and resources for transforming otherwise unusable objects into home décor.

Today’s HOME section of the Los Angeles Times introduces a new feature about recycling old objects for home and garden decor. It’s the brainchild of editor Craig Nakano and we hope this is just the beginning of the “hunt” for cool ideas that give new life to elderly castoffs.

To get things going, I created the first product – a cocktail tray made from a vintage feature-film canister. I found the 14-inch diameter tins at Pasadena Architectural Salvage, a store filled with carefully salvaged columns, doors, windows, corbels, gates, hardware and more. Most everything there is pricey (we’re not talking junk-shop rates) but worth it if you want to factor in the “value added” of someone else seeking, securing, and transporting rare or hard-to-find objects.

When I visited Pasadena Architectural Salvage, I got lucky. The tins (bottom and lid as a set) were $5 each. I found similar ones for $15 to $25 each on eBay, so I know I got a steal.  My Recycled story, “A second serving,” gives readers the background of these vintage 35 mm film tins and step-by-step instructions for making their own. My finished photo appears above, with two heirloom ridged and gold-rimmed juice glasses that were my grandmother Helen Winslow Ford’s (thanks, mom!).

P.S., I used “a lust for rust” in my lede sentence. Credit must be given here to my friends Beth, Lisa and Amy of the Salvage Studio. It’s one of their favorites and I’m sure they coined the phrase!

This entry was posted on Saturday, January 3rd, 2009 at 11:44 am and is filed under Creativity, Entertainment, Playfulness, Writing. You can follow any responses to this entry through the RSS 2.0 feed. You can leave a response, or trackback from your own site.