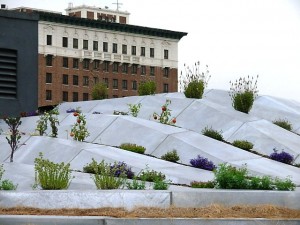 I wrote about Los Angeles’s gardens-in-the-sky in 2007, so when my chef-photographer friend Rico Mandel told me about a rooftop vegetable and herb garden that fellow chef Jonathan McDowell had been cultivating, I was excited to learn more. And to see it!

We grabbed a Starbucks and hopped on the freeway a few days ago to drive to downtown Los Angeles. On the way, I told Rico about an article I had just read in the January 2009 issue of Growing for Market, a journal for local food and flower producers. It was written by Marc Boucher-Colbert, a Portland sustainable farmer who created Rocket Restaurant’s rooftop garden with table-high steel planting troughs and 39 lightweight “kiddie” wading pools.

“Kiddie pools – how do you like that?” I asked Rico. “That’s cheap, lightweight and clever, isn’t it?” He silently chuckled to himself. Later, I understood why. Because what Jonathan had to show us was as far from a plastic wading pool as you could get. 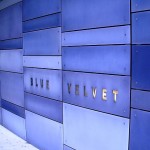 Blue Velvet restaurant occupies the ground floor of a 10-story, 1960s-looking (but new) apartment building – all horizontal lines and clean facade. Jonathan met us in the parking lot and took us up the elevator to the top floor; we climbed a flight of stairs and emerged onto the roof.

Rico hinted about the totally unusual, sculptural design that contains Blue Velvet’s edible crop, but there was no way I could have envisioned the fluid, galvanized metal, Frank Gehryesque installation in front of me. What the . . . ? 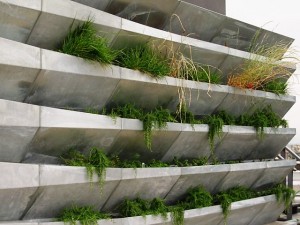 Turns out, this creation was fabricated on site to mold up and across a bleacher-like frame that hides HVAC units and other commercial rooftop paraphernalia.

It begins as a 10-foot vertical installation of long, horizontal channels – stacked almost like a wall of roof gutters. Many of the sections are planted with trailing rosemary. We marveled at the metal material. Even though Rico and I visited on a dreary, cool day in June, there’s no denying Southern California’s heat and sun effect. “Oh, well, this wall is north-facing, so at least it’s away from the most intense heat,” I commented.

“Wait until you see the rest of the roof,” Jonathan promised.

We walked a few yards across the roof, following that vertical wall of herbs, and I noticed how this “metal farm” took on kinetic qualities, wrapping over and around the “stuff” on the roof (and in the process, facing due south!). 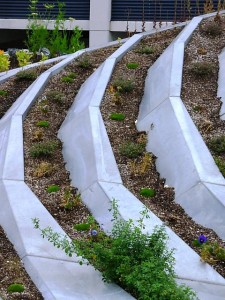 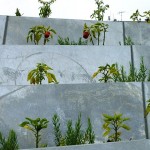 To get an idea of how this scheme looks in person, take a sheet of paper from your printer and fold it back and forth every 1/2-inch or so. This is how we made paper “fans” when we were kids. Open up the paper slightly so there are V-shaped pleats. Now, imagine translating that texture to sheet metal. The V-shapes create long planting channels, about 4- to 8-inches at the deepest point. Sections of the metal, welded together every 18-20 inches or so, take form, twisting, bending and turning as a beautiful sculpture. 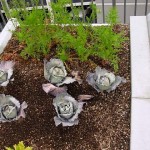 But for all practicality, in responding to this design as a gardener, I have to admit that a million questions flooded my mind. How can tender herbs, greens and vegetables handle this sun-baked, roots-against-metal, rooftop condition, especially in July and August when it is ugly-hot? Moreover, where was the irrigation?

Jonathan, who just completed a four-year stint at Blue Velvet (two years as sous-chef and two years as head chef), looked at me and shrugged. Although he wasn’t involved in the design of the “garden,” Jonathan was tasked with figuring out how to grow plants in it. That has meant filling those pockets and grooves with soil and planting veggies in an artful way. There’s no denying this is an evocative design. “It pleases the eye,” Chef Jonathan acknowledges. “It has attracted a lot of attention.”

But – duh. Every square inch of this garden has to be hand-watered.

“In L.A.’s restaurant gardens, freshness is grown to order,” a May 20th Los Angeles Times Food article, Betty Hallock featured Blue Velvet’s rooftop garden, quoting its designer, architect Alexis Rochas: “The point was to experiment with how to turn infertile ground into a fertile one,” he said. 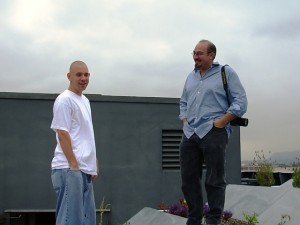 That’s an admirable goal. But the experiment has revealed that plants here don’t thrive against metal, and the absence of drip irrigation – that could direct moisture straight to root zones – is a negative. I’m worried that those hand-watering duties will likely be neglected when the guys in the kitchen get super busy!

Metromix Los Angeles recently featured “rooftop gardens” in a trend report by Krista Simmons. She included Blue Velvet’s in-the-sky garden, calling it “a sweeping silver flatbed . . . strikingly similar to the Walt Disney Concert Hall.” Simmons points out that the garden doesn’t generate enough to sustain the restaurant, but adds: “. . . McDowell does use the produce for tasting menus, amuse bouches and specialty holiday events.”

I applaud the rooftop restaurant garden. It’s a great vehicle to bring the “seasonal, sustainable and local” concept from garden to plate. To succeed, however, Blue Velvet needs a retrofit. Maybe getting an irrigation specialist up to that rooftop will help. Ask a professional market farmer or gardener to consult on how to better grow and sustain these poor little plants – they looked pretty stressed out! After all, part of the sustainable equation is to work with nature and create a supportive growing environment so that plants are productive and bountiful.

Growing Your Own Vegetables with Lorene Edwards Forkner 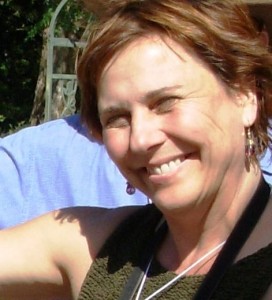 I am so proud of my gal-pal Lorene Edwards Forkner and her latest book, Growing Your Own Vegetables (Sasquatch Books, 2009, $17.95).

An inspiring and essential compendium of vegetables and herbs to grow in your own backyard, GYOV is the first in Sasquatch’s series of single-topic references inspired by the late Carla Emery’s The Encyclopedia of Country Living.

If you came of age in the 1970s, you’ll remember this huge Yellow Pages-like tome. More than 600,000 copies have (and continue to be) sold over the years, even though Carla passed away in 2005. 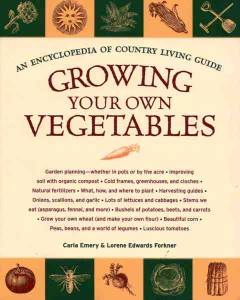 It’s a good thing that Lorene was a back-to-the-earth gal long before modern-day foodies who are just discovering the joys and benefits of tending to their own edible plants.

She writes confidently and lovingly about all the great veggie and herb crops that have grown in her potager over the years. In GYOV‘s 180 pages, Lorene’s lively, conversational tone makes the idea of planting and tending one’s own food sources sound easy and achievable. There’s no right or wrong here, just an enthusiasm that says, “Come on, you can do it, just try!”

Lorene hints at an early obsession with urban farming in her introduction to GYOV, in which she thanks her parents “who allowed me to dig up our backyard, plant corn, and walk away.”

That curious opening prompted me to request the “back story” when Lorene and I spoke by telephone last week. Here’s her true confession:

“It was the mid 1970s, I think I was in junior high school. One day, I tore up about one-third of our backyard and planted it with corn. Then I lost interest and walked away. Oh my goodness, it turned into the biggest mess! I was in so much trouble because what I created was everything that ran against my father’s neat-and-tidy instincts. It was total chaos. And that was truly my first garden.” 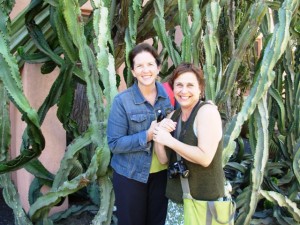 Lorene and me, visiting the famed Lotusland in Santa Barbara (2007)

Not much later Lorene went to college and married her high school sweetheart James (that’s where I met up with them in the late 70s-early 80s in Seattle).

After a successful career in art, garden design and nursery ownership, Lorene joined the writing profession in earnest several years ago. One day last spring, Lorene met with Gary Luke, Sasquatch’s editorial director. He showed up carrying the latest edition of ECL (which was about to celebrate its 35th anniversary of the first printing).

That’s when Lorene proclaimed: “I know this book. I bought it in college. I knew who Carla was and what she was about.”

With one Sasquatch title under her belt, the hilarious and irreverent Hortus Miscellaneous, Lorene agreed to tackle editing and rewriting the first two single-subject adaptations of ECL.

She’s an amazing writer, but this project called for more than good composition skills. It required a dose of literary anthropology and journalistic archaeology to dissect the 900-page, 3.5 pound title (yes, she weighed ECL’s 10th edition to verify this fact) and turn out a very readable, user-friendly Veggie Manual. END_OF_DOCUMENT_TOKEN_TO_BE_REPLACED 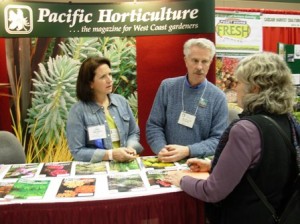 The press release just arrived in my in-box, and it announced the 2009 Northwest Flower & Garden Show’s theme. It’s only six months away – and I’m already excited! The theme: SUSTAINABLE SPACES. BEAUTIFUL PLACES. I like it! A lot!

The Northwest Flower & Garden Show, created by my pal, the talented and visionary Duane Kelly, today announced its 2009 theme:

“. . . (the) show will place a major focus on gardening materials and techniques that are good for the environment,” said Duane Kelly, chairman and founder of the annual event, now in its twenty-first year. “Show goers can expect to come away with a number of great ideas that conserve resources such as water and soil while, at the same time, making their gardens more self-sustaining and easier to care for.

“During the past year, organic gardening and vegetable gardening have grown in popularity thanks to the public’s keen interest in doing what’s best for the environment.  The movement has also gained traction with consumers seeking homegrown fruits and vegetables that not only taste better but reduce ever increasing grocery bills.” END_OF_DOCUMENT_TOKEN_TO_BE_REPLACED