I’m watching and excitedly dancing in my seat from Austin, Texas as you and the other pioneers of sustainable floriculture change the face of the industry! Brava!!

Can’t wait for the directory project to come to fruition- my tiny donation did’t break the goal mark, but every little bit counts. Thanks from EcoChic Floral.

Above is just one of the many supportive messages I’ve received in the past three weeks since launching the Indiegogo campaign to help me complete the launch of the Slowflowers.com site. 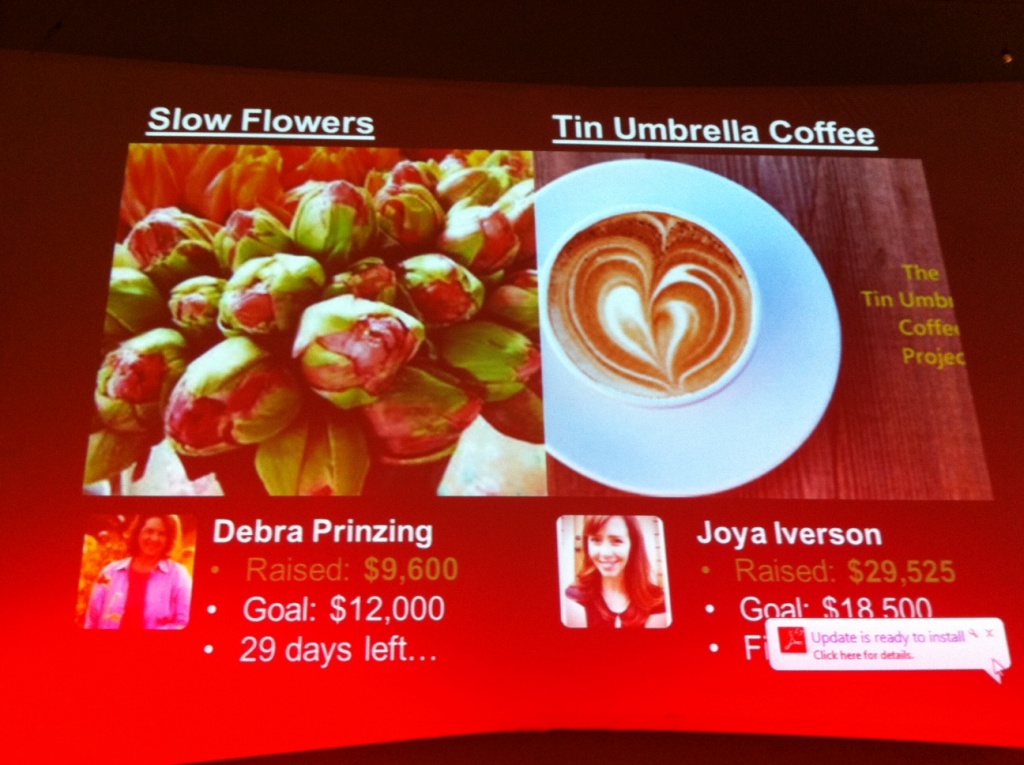 So fun to see this project on the big screen at last night’s Indiegogo Seattle Event!

It has been so gratifying to run my crowdfunding campaign on Indiegogo, the amazing resource that has such an inspiring tagline: “Fund what Matters to You.” Truly, if you are planning on taking this path to help raise funds for your own passion and dreams, this is the company to work with. They’re amazing!

SO many people – friends, family, fellow advocates in the Renaissance of the American Grown Flower Farm – and more, have contributed funds large and small.

Even more people loyally promote this project on their own social networks, like my Facebook friend Annie Haven of Authentic Haven Brand Natural Brew who constantly gives me a thumb’s up or an encouraging comment or re-post. It means so much.

Or my number-one supporter Kasey Cronquist, CEO of the California Cut Flower Commission, who has been picking up the telephone to call and encourage someone else to get involved.

Or, like my friend Susan Appleget Hurst, some are sending an email to an entire networks of people, encouraging them to view flowers as part of agriculture. Thanks so much to you all!

Here are some stats:

Number of countries represented: 3 (U.S., Russia and the Netherlands)

There is one opinion that occasionally bubbles up in our industry that the idea of supporting local and seasonal flowers is “something that happens on both coasts” and that it is nonexistant in the central part of our country.

Thanks to the San Francisco Flower Mart for coming onboard this week with a $1,000 PRESENTING SPONSOR contribution!

Thanks to the Los Angeles Times (reporter Lisa Boone) for blogging about this project last week – that was a great show of media attention.

Thanks to Rochelle Greayer of the Studio G Blog for this wonderful post. I love that she describes Slowflowers.com as “an online farmers’ market for flowers.”

Thanks to Indiegogo’s Bret Harris and Amanda Hat for inviting me to be part of their Seattle Event last night. It was pretty fun to be with other fans of Indiegogo, including Joya Iverson who successfully raised $29,525 for her new venture Tin Umbrella Coffee Roasters – a whopping 160% of her original goal of $18,500.

Here are some more fun photos from last night’s event: 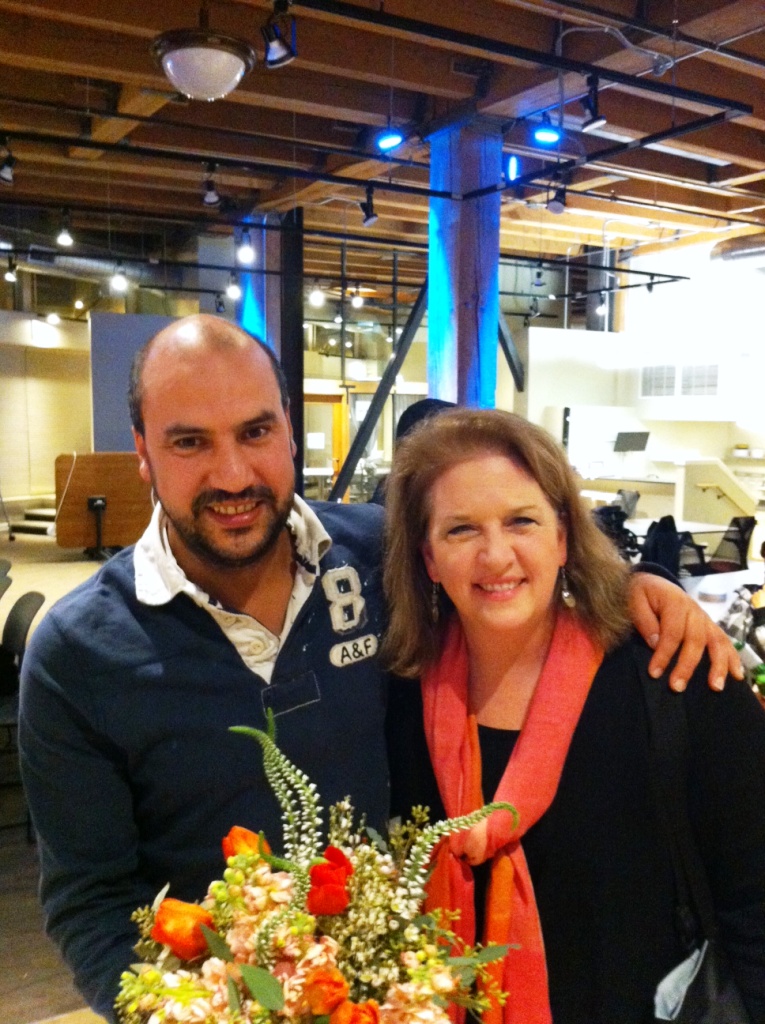 I brought a bouquet of local flowers – from farms in Washington, Oregon & California – to illustrate my passion for American Grown. . . it was a perfect “show-and-tell” and this guy won the bouuqet as a giveaway (his birthday is this weekend). Real men love local flowers! 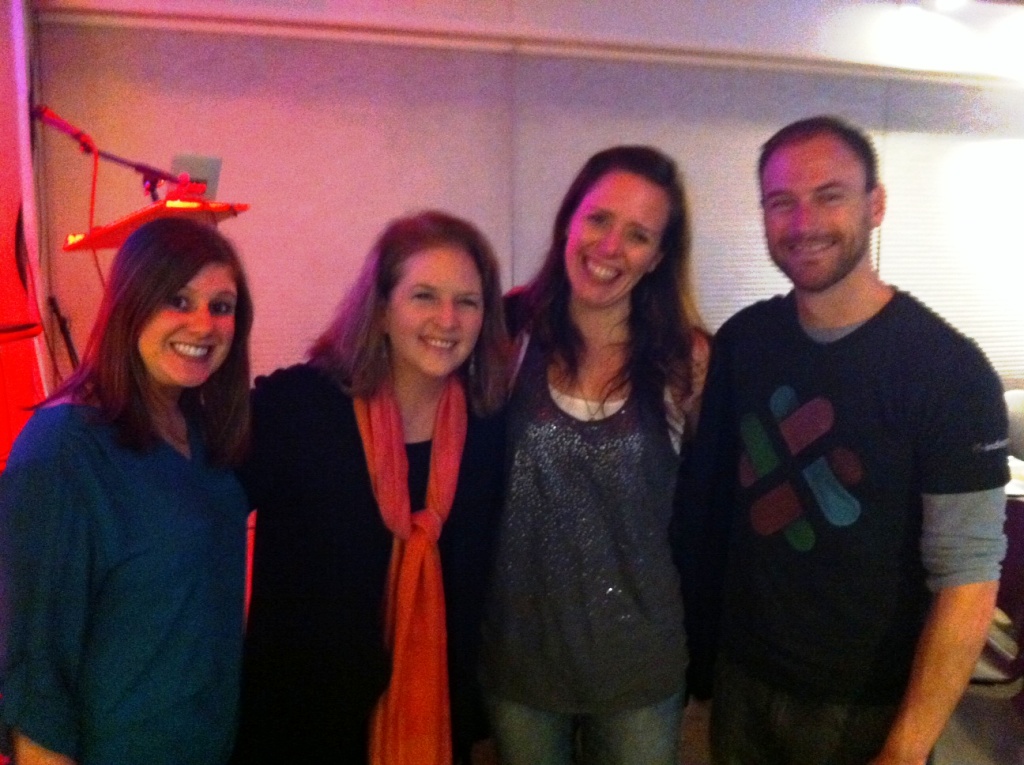 That’s it for now~ I’ve got lots more to do before this campaign ends . . . AND before we launch Slowflowers.com. Hoping to have a *beta* (soft launch) to share in the coming weeks. That’s the plan and my design and programming team is working tirelessly to finish. Stay tuned!