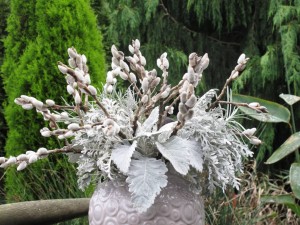 Choosing the appropriate vase for an arrangement is like finding the right pair of shoes to compliment your cocktail dress, right? There’s good, better and best. A critical eye is required to make the right choice!

Today, not able to decide which vase to use for my New Year’s arrangement, I photographed my silvery-winter ingredients in three different vases. Please vote for your fav!

We’re all a little tired of evergreens and red berries, right? That was my thinking when I came up with a metallic, pewtery vibe, which seems fitting for the New Year.

Option 1: Stripes of bronze, brass and pewter embellish this substantial urn, inherited from my father-in-law. It’s the only shiny-metallic vessel I own. 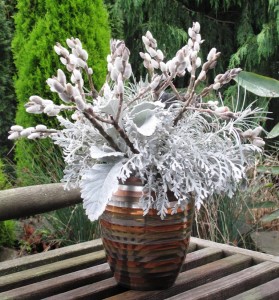 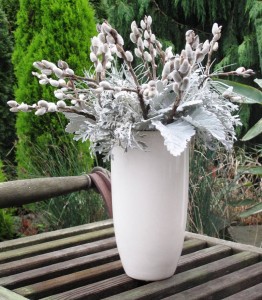 Option 3: More textures, this time in a ginger jar with a raised, circular pattern. Its color is arguably mauve or pale lilac. Or maybe gray with a tinge of purple. 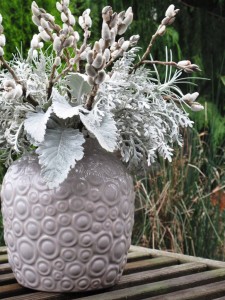 Please vote in the comment section – and tell me WHY you prefer a particular vase for this combination!

This entry was posted on Saturday, January 7th, 2012 at 10:16 pm and is filed under Creativity, floral design, Gardening, General, Plants. You can follow any responses to this entry through the RSS 2.0 feed. You can leave a response, or trackback from your own site.