A shed in the city 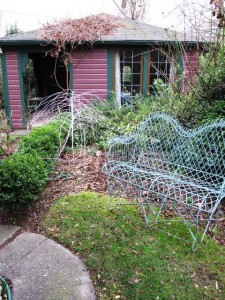 In a winter scene in a city garden, Jon's plum-and-green garden house is quite handsome

Seattle’s historic Georgetown settlement isn’t really known for being a residential neighborhood, but rather for the fact that a freeway runs through it, a bunch of warehouses populate its main streets and – oh yeah, if you look really close, there are a few pretty amazing lanes where Early Seattle architecture still stands.

Behind one of these cottages is an irresistible gentleman’s oasis, its exterior painted dark plum with pine-needle green trim. It has a comforting hip roof overhead, on top of which is a decidedly non-urban weather vane.

Jon Dove, the gentlemanly owner of this garden house, is an estate gardener and talented plantsman who grew up in Georgetown as a kid and found that as a grownup, he didn’t want to leave. Jon has restored and revived a 1905 cottage-style farmhouse here, planting a voluptuous, beautiful tangle of a garden in front, on the side, and in the back.

I first met Jon through Jean Zaputil, my good friend and garden muse. They had volunteered at the Washington Park Arboretum display at one of the flower shows and found they were kindred spirits. One July, many years ago, Jean and I went on the Georgetown Art & Garden Walk – a walking tour put on by the neighbors rather than one of those fancy affairs with shuttle buses.

On my trip last week to Seattle, I was presented with an unexpected gift of afternoon tea in Jon’s new garden house. Yup, in that former garage, which Jon says is only a little younger than his house, maybe from the ‘teens. 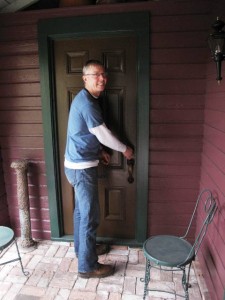 Here’s how I returned to Georgetown to discover Mr. Dove’s Delightful Garden House.

Daniel Mount, another gentleman gardener (and a superb, dreamy writer, too – check out his blog), invited me to have tea when I came to Seattle. This was going to be tough, due to my schedule. But Daniel dangled the carrot from a stick: “We could meet at Jon’s – I want you to see his new shed.”

Oh, Daniel. You definitely know how to tempt a shed aficionado like me!

So after finishing up a photo shoot with David Perry (for our new book project – more on that later), and before joining my friend Jan Hendrickson for a lovely dinner, I made my way down I-5 to Georgetown. Jean was supposed to join me, but since she had just logged six or seven hours helping us as a stylist for the aforementioned photo shoot, she needed to take a pass. Of course, since she lives in Seattle, she can go see Jon anytime. 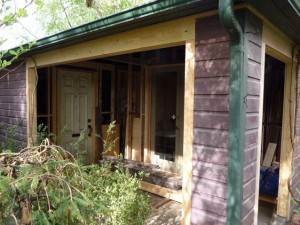 A work-in-progress photo, courtesy of Jon. This shot illustrates how the carpenter cut away the side of the garage to create a covered porch

Jon says it started to bug him that the useless garage was taking up a chunk of space otherwise deserving of something more attractive. As is the case with many people (I should know – I live in California where it happens for everyone), the garage was just a repository for stuff. After not looking at or using that stuff for a decade or so, Jon wondered if he really needed it after all. Voila! Out with the junk, in with the garden antiques.

To get there, Jon sketched out a new floor plan for the squarish building. He intelligently carved three useful spaces out of the 20-by-20 foot structure. Its back section is separated by a wall (and door) to a long, narrow area for bicycle storage, garden supplies and tools.

The original sliding garage door opens to the alley, so this application was a perfect way to leave the utilitarian stuff facing away from the garden.

Left with about three-quarters of the footprint to work with, Jon then sliced that space into two sections – one larger, which becomes the main interior room; and one smaller, which is the corner that juts into the garden. 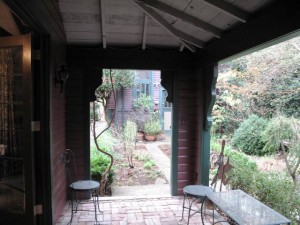 Finished with a brick floor and fanciful bracket-trim, it's a sheltered spot to sit in any weather.

He worked with a carpenter-friend to cut away an exterior side opening and “doorway” in that corner, essentially creating a covered porch. It is now carpeted with a pattern of recycled brick, set in sand.

By adding decorative corbels to the upper corners of the two openings, the space feels like a grand porch beneath an overhanging roof. “I wanted to be able to sit outside even when it rains,” Jon says. Cozy, comfortable, thoroughly delightful.

Now we shall step into the inner sanctum, through the French doors and into the room where tea was promised. A glance at Daniel’s face revealed that he had a secret I didn’t know quite yet. Inside, I understood why he was grinning. I forgot about the promise of tea and drank in the decorative sitting room.

Jon is a scavenger, like many of us. He found large, divided-paned doors to enlarge a tiny window space into a picture window. In the winter, it’s nice to see the bones of the garden revealed. What stands out is a graceful, curved metal bench, its lines echoed in the arched canes of chalk-white ghost bramble (possibly Rubus thibetanus). 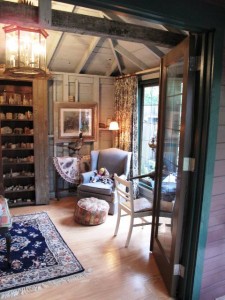 A peek inside: Elegant, refined, inviting

Jon used plywood to cover the floor and then sealed the inexpensive material with clear, water-based semi-gloss Verithane. The light colored wood floor contrasts nicely with the dark, stripped-down ceiling beam (original to the garage).

An oversized vintage brass lantern hangs at the peak of the room, dominating the scene in a very pleasing manner. Because of the ceiling’s volume (I’m guessing it’s approximately 10-feet tall at its peak), there was plenty of space for Jon’s carpenter to add an upper ledge where birdhouses are now displayed.

Against one of the two solid walls is a garden bench painted pea green. Daniel somehow obtained the bench from the set of a Chekhof play and brought it here as a gift for Jon. The three of us started dreaming about moving the bench to the covered area outdoors so as to make room for a daybed. But then, maybe not, because everyone who visits Jon will yearn to nap in this garden house (me included).

UPDATE: Jon sent me this note last night. . . reading it put a smile on my face:

Oh Debra, I forgot to mention after your visit, I moved the bench from inside the Garden House to the porch. I then moved the my guest bed to the Garden House, I spent a night out there, was cozy. Looking forward to spending summers there. You’re a whirlwind of great inspiration.

Above the bench is a fantastic objet – a cast iron circle that measures about 48 inches across. There’s a mirror at the center, which reflects the garden’s foliage and flowers into the room. Turns out, the scrappy piece of metal was once the base of a stove that Jon took out of his home when he modernized it. He saved it – for no inexplicable reason other than it was strangely shaped and interesting – and, voila! Now it’s this dramatic wall detail. Ironically, an old mirror from a vanity or hutch fit perfectly into its center. 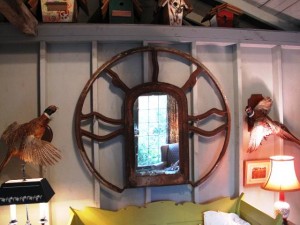 It’s amazing how many great design ideas reside inside a few hundred square feet, including some recycled toile ceiling-to-floor draperies that Jon inherited from friends. They add style, warmth and privacy when pulled across the French doors. I’ll let my photos show you some of the other nice details Jon has added.

Jon says he spent around $5,000 to $6,000 for construction (labor and materials) and about $2,000 to have the garden house painted. To me, it seems like a great investment that adds a whole lot of character, interest and function to his urban garden.

Finally, I couldn’t take my eyes off of his collection of architectural miniatures that fill an old canning cabinet. The cabinet is ancient, dating back to the very first settlers in Georgetown. The Horton family platted Georgetown in the 1870s. A friend of Jon’s rescued the wood cabinet from a home once owned by the Horton daughter. The square-head nails hint at its pedigree.

The shelves are filled with tiny wooden buildings that Jon cuts from scraps and covers with beautiful, intricately painted details in black – windows and doors, of course; but also molding, corbels, cornices, all rendered with tiny brush strokes.

Here are some close-up details of his whimsical, wonderful miniatures. 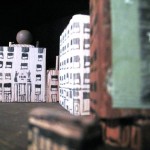 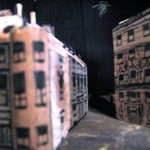 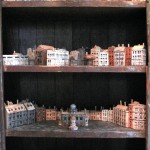 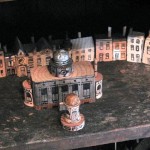 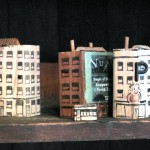 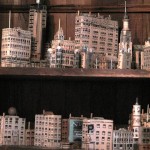 This entry was posted on Wednesday, February 10th, 2010 at 2:05 pm and is filed under Architecture, Creativity, Gardening, General, interior design, Landscape Design, Plants, Sheds & Havens. You can follow any responses to this entry through the RSS 2.0 feed. You can leave a response, or trackback from your own site.

8 Responses to “A shed in the city”