These green walls will blow your mind 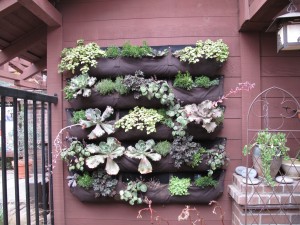 Designed in Los Angeles, fabricated in Kansas, and soon to hang on a wall near you, the Woolly Pocket is a soft-sided planting envelope that makes it possible to have a lush wall of vegetation without having to hire a structural engineer.

Vertical gardening is all the rage, so here’s a way to bring plants into your home (indoors or out) with a breathable fabric container that is easy to hang and maintain.

Fill the 15 x 24 inch pocket with a little potting soil, plant it with lush greenery and allow the vines or foliage to spill over the top edge. Combine multiple pockets to create a living wall as is shown in these photographs.

WHAT IS THE WOOLLY POCKET? 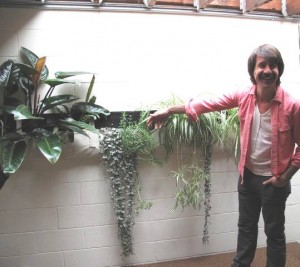 I met designer Miguel Nelson at his studio in Culver City earlier this week and took a tour of Smog Shoppe, his event space where the Woolly Pocket was created.

Miguel was trained as a sculptor, but he obviously thinks about sculpture in a completely different way than artists whose work stands on a pedestal in the garden or in the foyer of a home.

The type of sculpture Miguel conjures is an entire building and outdoor courtyard that contains green events. He and Sherry Walsh, his wife, retrofitted an unsightly garage used to do emissions tests on cars (thus, the clever Smog Shoppe name). 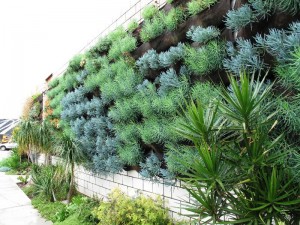 Used for private and corporate events, the warehouse-y space needed to be softened up. And so Miguel and his brother Rodney created huge wall-hangings with pockets and stuffed them with succulents, tropicals and other plants that cascade and drape. The hangings look like those large shoe-organizer pocket panels, but are oh-so-much more elegant.

Over two year’s time, the plants have thrived, nearly obscuring the concrete block walls and the black wool pockets. Once partygoers started asking if they could buy the planting system for their own homes and gardens, Woolly Pockets was born. 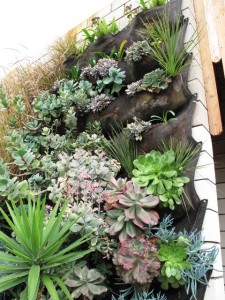 A detail shot reveals how happy these plants look

Instead of wool felt like the original system, Miguel and Rodney now use an industrial-strength USA-made felt from recycled plastic bottles (it is available in chocolate brown, black and cream – with a promise for more colors in the future). The pockets have a built-in moisture barrier that allows the plants to breathe while keeping moisture off your walls or floors.

Miguel’s eco-publicist, Corey Scholibo, is convinced that this green gardening solution will capture the imaginations of non-gardeners. It is a cool interior design application that is at the same time retro (think indoor plants of the 1970s) and futuristic (plants will save the planet!).

“You can now garden any time, anywhere, with little or no skill,” Corey says. 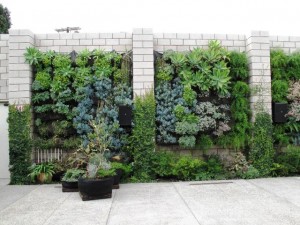 Interior walls of the courtyard are planted top-to-bottom

The team is inventing all sorts of new iterations of the Woolly Pocket. There is a Vagabond, which I wrote about last month for LA At Home (think “Garden Container meets Handbag”) and at this weekend’s Accent on Design in New York, Miguel will introduce a 5-sided wee-woolly tabletop planter and a gorgeous, free-standing 6-, 8- or 10-sided planter that has zippered sides so you can unzip sections to accommodate sculptural tree branches poking out. Those items appear to be ideal for the interior space and are a lot more attractive than some of the plastic, clay or faux planters I see hanging around garden centers.

You can mostly find Woolly Pockets online, but Miguel expects to sell through several retail channels by later this year.

“I see all these amazing living wall installations in public spaces,” he points out. “But you never read about a vertical garden you could have yourself. Now, even with just one Woolly Pocket, you can grow plants on your wall.”
With a cluster of them, arranged like a giant patchwork quilt, pretty soon you can have your own living, green wall.

I have four dark-brown Woolly Pockets to try out and I’ll report back soon on how they are doing. I’m going to hang them outside to try and mask some of that ho-hum tan stucco we’re so lucky to have here in SoCal.

This entry was posted on Thursday, January 28th, 2010 at 1:57 pm and is filed under Architecture, Creativity, Entertainment, Gardening, General, interior design, Plants, Playfulness. You can follow any responses to this entry through the RSS 2.0 feed. You can skip to the end and leave a response. Pinging is currently not allowed.

10 Responses to “These green walls will blow your mind”