A filmmaker, his designer and me

. . . in an intimate, domestic setting illuminated by flames, candles and carnival lights. 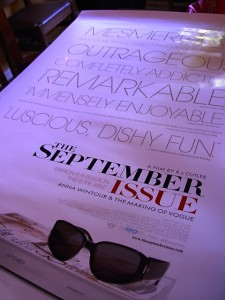 Thanks to ample layout space and the 4-color gods, today’s Los Angeles Times HOME section devotes a whole lotta real estate to my feature story about the indoor and outdoor kitchens of hot documentary filmmaker R.J. Cutler.  If his name doesn’t ring a bell, I refer you to the The September Issue, the documentary feature film that opened last weekend in New York and opens in Los Angeles and the rest of the world on Friday. The film follows the legendary Vogue editor Anna Wintour and her creative team as they put together the fashion magazine’s most important issue of the year – in this case, the September 2007 issue. The expanded online photo gallery is here. 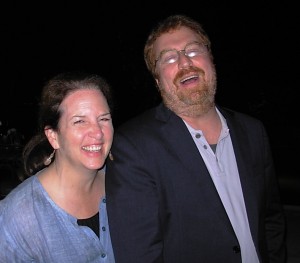 Debra and R.J. on location in his outdoor dining room

Every good thing that has happened to me since moving to Los Angeles comes through meeting interesting and talented people who, in turn, lead me to more fascinating and gifted ones. I met R.J. through interior designer Lory Johansson, whose studio is called Just Joh. I met Lory indirectly while profiling a Malibu garden designed by Scott Shrader for Garden Design magazine. Lory designed the interiors for Scott’s clients and I mentioned their collaboration on choosing materials for the indoor-outdoor elements in my text (that piece appeared in January, called “Sunset Soiree.”).

During the editing process, I received a message from the Garden Design fact-checker saying that Lory would love to show me one of her outdoor projects. We connected by phone and arranged to meet at R.J.’s Hollywood Hills property this past February. It takes a lot of time to scout gardens. It’s kind of like buying futures on the commodities market. You have to spend a few hours on the freeway, usually in crummy traffic, on the off-chance that the architecture, interiors or landscape you’re scheduled to visit will be a worthy candidate for publication. For some reason, after speaking with Lory, I had a hunch the trip to R.J.’s wouldn’t be a waste of my time. 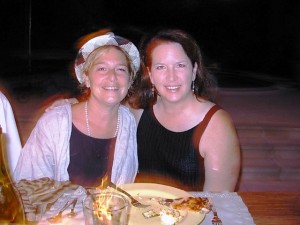 Designer Lory Johansson and me. The photo is a little blurry because it was taken without a flash by candlelight. We're happy that the shoot is over!

The property is just stunning, high in the hills above Beachwood Canyon and literally under the HOLLYWOOD sign we’ve all seen in a million movies and TV shows. It’s a circa 1924 Spanish Colonial Revival home, which R.J. acquired in 2005 and has subsequently restored with Lory’s brilliant design skills. Big but not imposing, the house sits on three-quarters of an acre. There is a beautiful garden with a swimming pool, strolling paths, a lawn for croquet and square-dancing, a secret garden and other intimate spaces. You can’t see that now, though, because photographs of the garden are under wraps until Garden Design’s March 2010 issue (photographed by the very talented Jack Coyier). That’s right. First the Los Angeles Times. Then Garden Design. See how lucky I was connecting with Lory?

At the outdoor pizza party featured in today’s LA Times, freelance photographer Ringo Chiu, who shoots frequently for the newspaper, captured the festivities through his lens. I tried to stay out of the way while also surreptitiously “art directing.” Anyone who has worked with a newspaper photographer over the years (this comment is for you Melanie Munk) knows how impossible it is to get them to do what you want. And even more impossible to style a shot as you would for a magazine or book. However tough that “dance” can be, Ringo at least humored my few suggestions (ie, shouldn’t we light the fireplace? how about the candles? let’s move that dead potted rosemary!). He did a great job and it was fun for me to snap a few shots of him at work, shown here. 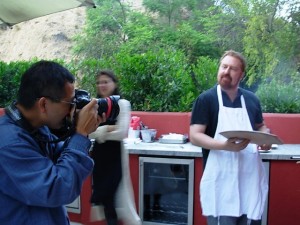 You can draw a lot of inspiration from this story for your own garden. The best tip from Lory is to go bold with color. She designed the entire outdoor kitchen, benches, fireplace and privacy wall with a white stucco finish, like R.J.’s house. But when it was finished, Lory says she stood at the opposite end of the garden and looked across the pool to the too-white scene. “It looked like Greece instead of Los Angeles,” she lamented. Lory knew color would lend heightened drama, especially in the outdoor setting.

The day before R.J. was planning to host his first big al fresco pizza party, she couldn’t stand it. Lory went out and ordered gallons of paint – rich, deep, paprika-terra cotta red – and got the crew started painting. When R.J. came home and saw what was going on, she promised him that if he didn’t like the result, she would pay to repaint everything white again. (Can you imagine how many coats of white paint it would take to cover dark red?).

Let’s just say Lory’s gamble paid off. You have to read my story to see what R.J. says of the decision to keep it.

After researching and reporting this story, I have two new items on my own garden wish list. Number one: I need to buy a 100-foot string of carnival lights to suspend around my own garden. Number two: I desperately want my own wood-burning pizza oven. But only if I can have Chef Alberto come over to cook for me!

Here are more of my candid party photographs: 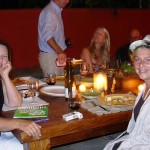 At the end of the evening, I did have a chance to sit down with Lory and enjoy some of the yummy food 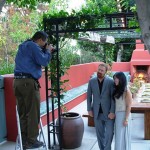 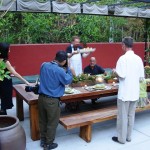 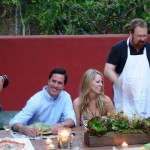 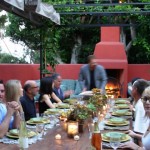 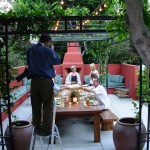 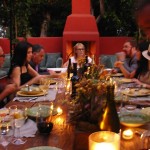 A dreamy evening around a huge outdoor table, under the stars 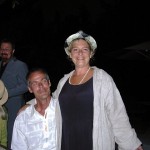 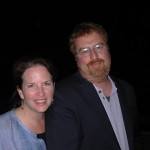 This entry was posted on Saturday, September 5th, 2009 at 8:48 am and is filed under Architecture, Creativity, Entertainment, General, interior design, Landscape Design, Plants, Playfulness, Writing. You can follow any responses to this entry through the RSS 2.0 feed. You can leave a response, or trackback from your own site.

One Response to “A filmmaker, his designer and me”