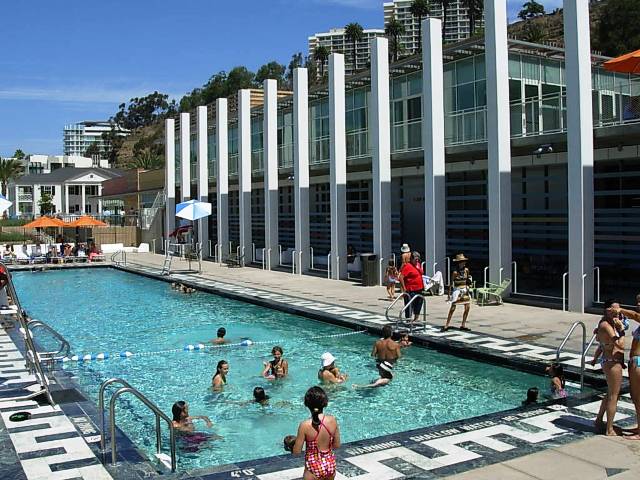 My friend Cristi Walden invited me to join her on an excursion earlier this week, one that introduced me to a chapter of Hollywood’s glamorous history. Cristi, a native Californian, is plugged into the architectural-decorative arts world around here. But she’s not just into the luxury, high-end stuff. She’s been known to cruise around LA after dark on tours of vintage neon signs with her pal Eric Evavold, who also accompanied her on our field trip.

The visit gave me a great excuse to spend a morning with Cristi and to learn something new about my own backyard. We met up at the new Annenberg Community Beach House at Santa Monica State Beach, which opened in late April at 415 Pacific Coast Hwy.

Located on Santa Monica’s “Gold Coast,” this is the site where publishing tycoon William Randolph Hearst built a $7 million mansion for his starlet-girlfriend Marion Davies. A very informative docent shared the fascinating story. Hearst, who had been married since 1902, became smitten with Marion Davies when she was a teenager performing in the Ziegfeld Follies. He waited until she was 20 and then began to court her (he was 54). Hearst even built a film studio in Manhattan as a vehicle to turn Davies into a classical actress. He never divorced his wife, Millicent, but remained with Davies, who was his companion for over 30 years. She was in 48 movies during Hollywood’s Golden Age. 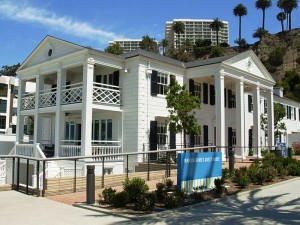 The Marion Davies Guesthouse has an impressive scale, even for a so-called smaller residence

Hearst visited friend Louis B. Mayer at his “Gold Coast” mansion and in 1926 decided to build his own beachfront estate. Photographs portray the 110-room Hearst mansion as an edifice that looked more like Monticello than anything you’d expect to see on the Pacific Ocean. The five-acre estate also encompassed an ornate marble-edged swimming pool, several guest houses and gardens. Famed architect Julia Morgan, who designed many homes for Hearst (including San Simeon) designed the interiors and also the guest house, which is now restored.

The parties they threw were legendary, including huge theme galas and costume balls whose guests included Charlie Chaplin, Greta Garbo and Louise Brooks. The power couple resided here until 1942, when they retreated to another of Hearst’s estates during WWII.

In the late 1940’s, the property was sold, becoming Oceanhouse, a hotel owned by Joseph Drown who eventually demolished the large mansion but preserved an original guest house and pool as well as cabanas and a locker building. Subsequently it was sold to the State of California and leased for thirty years to the popular Sand and Sea Club until the City of Santa Monica assumed responsibility for the site in 1989. After a brief period as a seasonal public beach facility, it was severely damaged during the 1994 Northridge Earthquake.

RESTORED TO ITS FORMER GLORY, IN PART 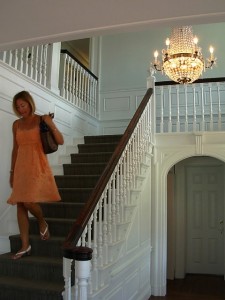 Recently restored to its former elegance, here's the foyer 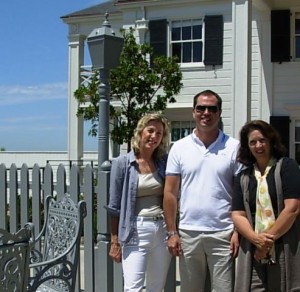 Cristi, Eric and Debra, in front of the Marion Davies Guesthouse

According to Cristi, for years Marion’s pool and guesthouse were closed off from public view, hidden and neglected behind a fence. Even though the property was smack in the middle of a city beach, it wasn’t maintained. Cristi recalls that friends (other California tile enthusiasts like her) snuck onto the property about 10 years ago just to photograph vintage pool tile-work that they feared would be destroyed.

In 2005, philanthropist Wallis Annenberg donated a boatload of money – $27 million – to save the property. I feel a special affinity for the Annenbergs, having once met her father, publishing tycoon Walter Annenberg, when I worked for Triangle Communications. Annenberg owned three magazine titles: TV Guide, the Daily Racing Form, and Seventeen Magazine, where I worked from 1980-1982. Once several of us flew on Annenberg’s private jet from NYC to LA to work at a Seventeen Magazine Tennis Tournament at Mission Viejo. Can you imagine me, a 22-year-old junior editor, getting to do that!? I still have the Triangle Corp. deck of playing cards as a memento from that trip.

Designed by Frederick Fisher and Partners, Architects, a new community pool house has 16 sleek “columns” across its facade, a symbolic echo of the 16 ornate columns that used to stand in that exact spot when the mansion faced a pool filled with frolicking Hollywood stars. Isn’t that totally amazing? 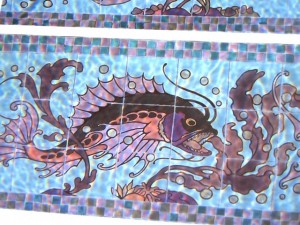 The refreshing and colorful new property also include a children’s play and splash area; beach volleyball and beach tennis courts; a beach cafe and new pool house. The historic Marion Davies Guesthouse has been restored and landscaped. It is available for rental events, but you can also take a guided tour like we did. I’m still not sure how this gracious residence avoided the wrecking ball; “she” must have many, many secrets in her walls!

The tile-lover in Cristi was super excited to see the beautiful and intact tile designs in three original bathrooms (one docent told us the tile had been painted over in white, requiring careful restoration to strip it away). Other noteworthy details include several original lights and chandeliers, as well as intricate crown molding and fretwork detailing. See those details below.

And for just $10, you can go swim in the pool where Hollywood’s beautiful people once bathed, or sun yourself on a chaise next to its black-and-white marble border. Only in L.A.

Here are some more images to enjoy: 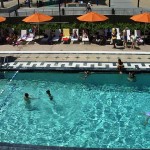 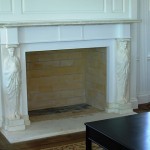 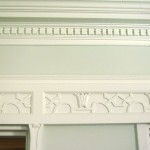 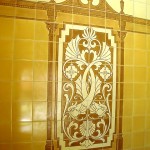 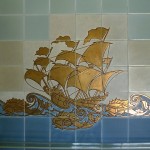 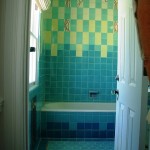 This entry was posted on Saturday, August 8th, 2009 at 6:23 am and is filed under Architecture, General, interior design. You can follow any responses to this entry through the RSS 2.0 feed. You can leave a response, or trackback from your own site.

2 Responses to “LA Field Trip: Hollywood opulence gets a facelift”