Home of the (Los Angeles) Times

When Alan Smart was a kid, he discovered an old trunk in an antique store and begged his mother to buy it. She refused (after all, he was 10). So young Alan spent $45 from his allowance to purchase the trunk himself.

“I like old-timey things,” Smart says in his retro Hawaiian-print shirt and board shorts, gesturing to his living room filled with restored antique armchairs and vintage California tile tables. 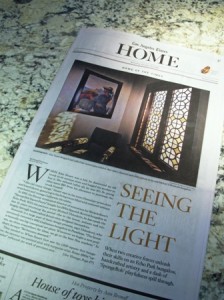 This is a story that underscores my belief that we can both possess a home and be possessed by it. It’s about how Alan and his partner Michael Uhlenkott transformed a nondescript 1930s Spanish Revival bungalow in an aging Los Angeles neighborhood into a showpiece for decorative arts and their amazing collection of early California pottery, tile, furniture, paintings, figures, and lighting. It’s about how their personalities and preferences are revealed through their choices of color, textiles and artwork.

Alan and Michael are artists of the highest order. If there is a surface to embellish, they will find a way, even if it means spending endless hours standing on ladders to hand-stencil the stucco ceiling with a Moorish pattern or antiquing the walls with layers of glazing, rag-application and dry brush painting techniques.

They design with a respect for the past, an appreciation for craftsmanship and materials, and a lighthearted sense of irony. There is no halfway effort here. Everything relating to a genre, period or style is explored, honed, refined and reinterpreted. There’s such an honesty and authenticity to each decision to adorn and decorate. I love every detail! 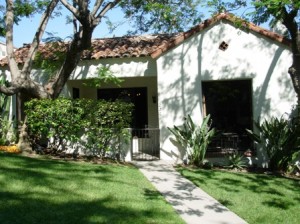 It was a pure delight to visit Alan’s home with my friends Cristi Walden and Sandy Koepke last spring. These two women are among the first new California friends who adopted me and introduced me to some of the most amazing homes and landscapes here. They are my “instructors” in a fast-track education designed to help me understand and appreciate — and learn to love — the character of this place on the map, Southern California.

We went to Alan’s on a Sunday afternoon in late March. Cristi just told me she had a “surprise” for me, with no further explanation. She could barely suppress her laughter at watching my expression as it slowly dawned on me what I was seeing. As Alan and Michael led me from room to room, through the main living spaces, outdoors to the landscape, and – oh, yes – to the basement, I became utterly enchanted with these men and this house. I later described the experience to Craig Nakano, my editor at the LA Times. Here is a portion of the email I sent him:

I was invited to his house by an acquaintance who is a collector of vintage California tile. She wanted to show me some great examples of how it was originally used in LA. We arrived at this rather modest 1930s Spanish bungalow, owned by Alan Smart. After touring the picture-perfect interiors where he’s furnished the LR and DR with pieces appropriate to the period, we peeked into his surfing-themed office and cowboy-Western-themed master bedroom — fun and filled with vintage collections.

Outdoors, I loved the garden with its long, narrow lap pool, surrounded by custom tile, replicating the original California style (Michael Uhlenkott, Alan’s partner, is a tile-maker for a local tile company called Native Tile). There is also a sweet courtyard-like patio and fountain, succulent and cactus plantings, and more tile.

Then, just when I thought it was time to leave, we entered the lower level (the home is on a sloping property so from the street it appears to be a one-story house, but there is a full-sized basement that opens out onto the garden.

And inside, Alan led us to “HaleKahiki,” his Tiki Bar. Alan has collected Hawaiiana and Polynesian decor for about 15 years, scouring flea markets, swap meets and antique stores. He was very selective, choosing only authentic and vintage pieces, rather than reproductions. Alan and Michael visited every tiki-themed bar and restaurant they could find in the LA area, gleaning design ideas for materials, lighting, even drink recipes.

So after sitting there with a group of Alan’s friends, hanging out on a Sunday afternoon and sipping one of his killer coconut martinis, I finally started to gently interview Alan (by the way, he wore a very cool orange-and-white Hawaiian shirt to complete the look!). When I asked Alan whether he was an artist or designer, he sheepishly said, “oh, I work in animation.” Then I prodded some more. “What project are you working on?” Finally, he said: “I’m the head of animation for SpongeBob.”

Okay, it all clicked into place. Perfect. SpongeBob is an underwater creature living in a pineapple, kind of a cartoon version of a Tiki bar. And here is his animator, recreating the spirit of SpongeBob for all of his friends.

Since I was there as a guest and not officially scouting, I didn’t whip out my camera (although I was so tempted). Later, in a thank-you note, I asked Alan whether his home had ever been published and whether he’d be open to me scouting it for you. He invited me to come back and said he’d be interested in talking about a story.

Needless to say, this email narrative, along with a few photos of Alan’s Tiki bar, which he shared with me, was all Craig needed to know. His email reply: Alan Smart. Yes, yes, yes. Yes to everything. Sounds fantastic.

I am so pleased with how the story turned out, and delighted that the Times has added to its web site a terrific gallery of 17 images of Alan’s home, Tiki bar, garden and many details of Michael’s awesome tile and stencil designs. You can click the link at the top of this post to reach it.

Thank you, Alan and Michael. You are both so obviously talented, but your enthusiasm and support for helping me tell your story is even more impressive than your artistry. You’re both terrific hosts, amusing storytellers, and an inspiration to know.

P.S., Thanks also goes to Cristi for making the introduction, and to Sandy, for making that day of touring so much fun. We need to get another outing on the calendar soon!

Here is my own gallery of images, taken after my first “official” interview with Michael and Alan: 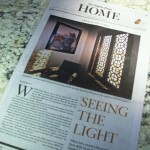 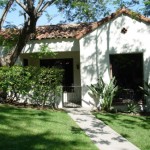 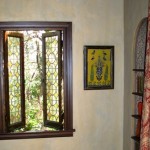 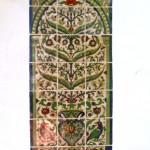 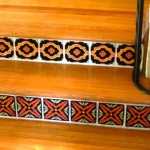 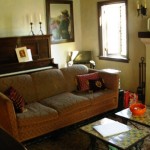 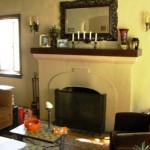 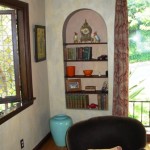 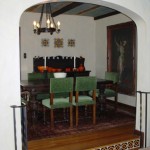 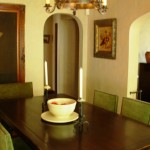 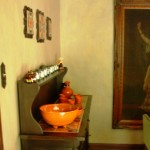 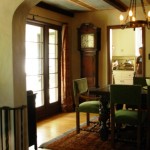 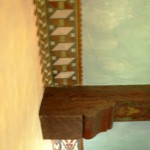 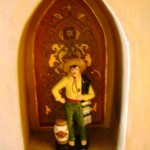 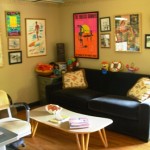 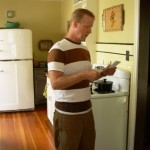 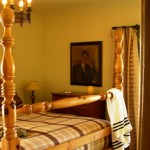 This entry was posted on Saturday, October 18th, 2008 at 12:22 pm and is filed under Architecture, Creativity, General, Playfulness, Writing. You can follow any responses to this entry through the RSS 2.0 feed. You can leave a response, or trackback from your own site.

6 Responses to “Home of the (Los Angeles) Times”