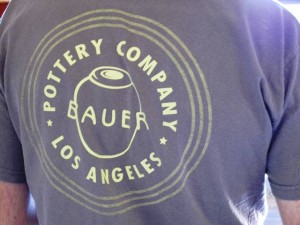 Thanks to my friend Cristi Walden and her “Merry Band of L.A. Archivists,” Wednesday added up to a very big Design Adventure. It meant putting a few hundred miles on the Volvo, but that’s part of life here. And anyway, I have NPR and my catch-up calls to friends in Seattle (with a head-set – I’m safe) to keep me company.

We arrived at 11 a.m. in a dusty town waaaaay east of me. Down a vintage lane called Main Street, where stood an ancient wood-and-galvanized metal warehouse. I later learned it was once a citrus fruit-packing plant when communities like Redlands and Highland grew oranges for the rest of the U.S. (we’re talking late 19th century).

This is the worldwide headquarters of Bauer Pottery, the colorful, joy-inducing collection of dishes, bowls, platters and all kinds of awesome outdoor pottery pieces for the landscape (flowerpots, urns, orbs, bowls and much, much more). It was very hard not to hyperventilate.

Janek Boniecki, president of Bauer Pottery California, greeted us. He was incredibly gracious and spent two hours showing our group of five all that he has accomplished since purchasing the factory and reissueing hundreds of Bauer pieces for grateful folks like me.  Manufactured in California since 1910, the highly-collectible vintage Bauer pieces are hard to find and all but the most serious aficionados are starting to feel priced out of the market. Unless you’re a seasoned collector, it’s really hard to discern the difference between an original Bauer piece and one of Janek’s reissues unless you flip it over and look on the back. The words “Bauer California 2000” are stencilled on the bottom of each new piece. 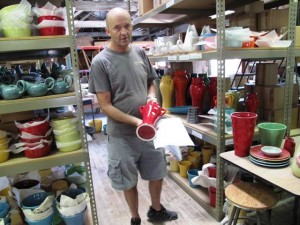 Janek shows us the reissued Rebekah vase in Bauer crimson

Here’s a bit of history that Janek shared with us:

The Bauer Pottery Company of Los Angeles (1882-1962) started in Louisville, Kentucky, and then moved to LA, where it flourished. J.A. Bauer created simple, yet beautiful stoneware from the late 1880s to the early 1960s, with lines ranging from redware flowerpots to brilliantly colored dinnerware. Bauer Pottery was a staple in American homes for many decades.

Inspired by the weather and the lifestylesof Southern California, Bauer Pottery created many different lines for the home and garden. These new styles and rich colors were introduced soon after the Depression, and it wasn’t long before all the major pottery companies in the United States began to follow with their own interpretation of Bauer’s vision.

Today the work of J.A. Bauer has been reintroduced to the home by a ceramics studio based again in Los Angeles. Just minutes away from the site of the original plant, the new Bauer line is being reproduced using some of the original pieces and models, with an emphasis on items that were manufactured by Bauer during the 1930s and ’40s. 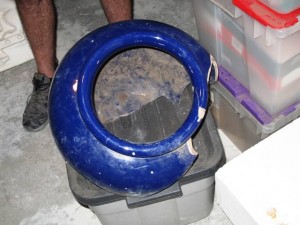 The broken rim and top portion of an original Bauer urn 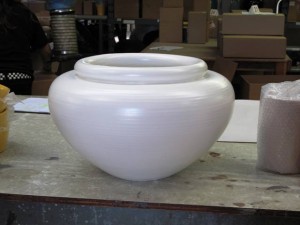 The story of how Janek saved Bauer begins in 1996 when he had a candle-making business. He was working in the film industry and wanted to start a business of his own.

“I started making candles in my basement – in a tiny, little 200-square-foot space,” he explains. Janek used colorful, inexpensive flowerpots to contain his candles. He ordered the pots from California Design Works in Highland, housed in the 36,000-square-foot fruit factory on historic Main Street, where Bauer now resides.

According to Cristi’s friend Terry Freed (who was part of our group), he urged Janek to stop making pottery in Bauer colors and instead reissue the original designs. Terry used to own an L.A. shop called Fiesta Specialties. “Janek brought me a ceramic planter with a candle in it and I said, ‘forget the candle,’ make the pottery,” Terry says. 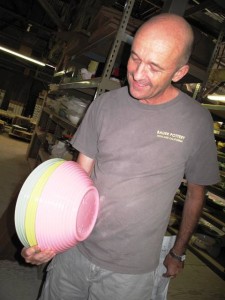 Janek shows how the stackable bowls can mix-and-match

Two years ago, the owners, Debbie and Marty, sold their factory – building, machines, kiln and operations – to Janek. They worked with him for several years to develop the Bauer reissues and stills show up three days a week at the factory, which is a pretty cool business transition model.

Cristi and Terry have befriended and supported Janek by lending him some of their original Bauer pieces as the basis for reissues. We saw the broken shard from a once-gorgeous Bauer oil jar that inspired a wonderful new pot (Terry’s partner Michael broke it accidentally, so they made lemonade out of that lemon and let Janek study and copy it).  The original pots might sell for $800-$1,000, but the reissued ones are $300-$600, depending on the size. Similarly, collector Linda Roberts, another one of our Merry Band, lent Janek a tall, slender Rebekah vase as the model for his new ones. The 22-inch reissued vase is $250.

It’s pretty mind-boggling what this tiny company is doing. Janek says there are 110 styles made in 15 different colors (classic Bauer colors, including Bauer Orange, Bauer Yellow, Turquoise, Federal Blue, Lime Green, Midnight Blue, Mango, Crimson, Teal Blue and Chocolate Brown – and all content to mingle, mix, and match with one another, plus a few new ones that I’m sure I’ve forgotten to list here).

We followed Janek downstairs to see where much of the ceramic casting and molding takes place. To get there, he led us into a freight elevator original to the century-old building. The lift is powered by water, making it the oldest water-operated elevator in California. It wasn’t fast, but it was a smooth ride. 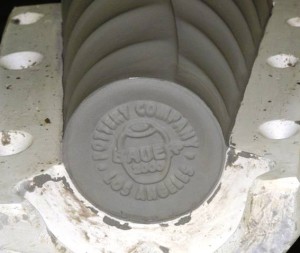 The bottom of every piece has Bauer 2000 on it

Downstairs, we saw shelves and tables and stacked with the unfired pieces. When you observe the “blanks,” without color added, you really can appreciate the graceful shapes and lines of Bauer’s original designs.

Terry showed me one large planter that he remembers seeing in Desi Arnaz’s nightclub on old “I Love Lucy” television programs. Actually, there were two of them because on the set, one planter was turned upside down as a base for the one containing a plant. That reference to “I Love Lucy” gives me a perfect mental picture of the Bauer pottery vibe – then, and now. 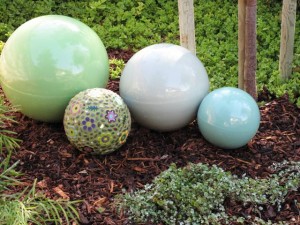 For those of you in the Los Angeles area, here is the best news. Janek holds occasional sales of factory seconds and samples. He started them last year and when news got out, there were 500 people lined up to buy the cheerful pottery. If you’re wondering whether I got my Bauer fix, the answer is YES. I didn’t leave empty-handed. In fact, I came home with a trio of garden orbs in Bauer colors. These orbs are new from Janek. They were never part of the original Bauer line, but are fired in several colors from the Bauer palette. So the large, 15-inch orb is lime green; the medium, 12-inch is pale blue; and the small, 8-inch is turquoise. I have them grouped in the garden with my lovely mosaic orb by Vashon Island, Wash.-based artist Clare Dohna. The effect is quite pleasing to my eyes!

And finally, a gallery of our visit: 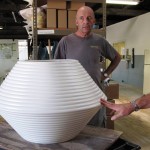 A “specimen grass planter,” a prototype glazed in satin white 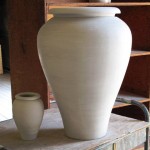 An 8-inch oil jar and a jumbo urn prototype 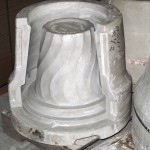 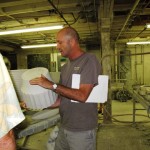 Janek shows us a piece that’s ready to be fired 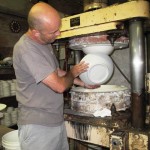 Janek illustrates how a bowl is formed by machine 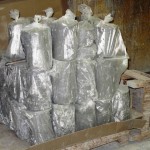 The raw clay, ready to turn into Bauer pottery 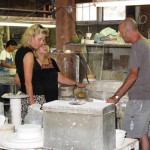 Cristi and Linda with Janek 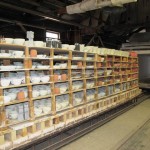 Thousands of pieces of pottery, ready to be fired (see kiln, right) 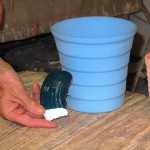 A Bauer flowerpot, glazed and ready for the kiln. After firing, it will be the teal color of the sample in Janek’s hand

This entry was posted on Saturday, September 12th, 2009 at 12:57 pm and is filed under Architecture, Creativity, General, interior design, Landscape Design, Playfulness. You can follow any responses to this entry through the RSS 2.0 feed. You can leave a response, or trackback from your own site.