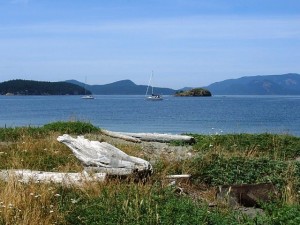 As if I were still in elementary school and had to write that first-day-of-school essay: “What I Did This Summer,” I will indulge in a little post about our July 4th weekend camping trip to Lopez Island in the San Juan Islands of Washington State. I visited Lopez several years ago to speak to a garden club there (but it was in October and pretty deserted for the season).
GREAT, LET’S GO CAMPING!
We were already in Seattle on a visit, so when our friends asked my son Alex and me to join them over the holiday weekend, we quickly borrowed sleeping bags and showed up bright and early to get the 2 cars loaded up. You need 2 cars when you have three grown-ups and four boys.

We drove from Seattle to Anacortes, Wash., where the Washington State Ferries depart for several San Juan islands, as well as Victoria, B.C. (Anacortes is about 2-hour’s drive north of Seattle). Jennifer and I were in one van with 2 boys. Her husband David was a few cars behind us with 2 other boys. Suffice it to say that the car-waiting lines were long and even though we arrived around 1:30 p.m., we were given the bad news that we wouldn’t get on the 2:30 p.m. ferry. Instead, we would have to wait until 5-something. Bummer. Setting up camp at the same time you want to cook dinner isn’t great fun. But the holiday craziness started on Thursday this year. Even though we thought we were smart departing for our trip on July 2nd, it appeared that thousands of other people were just as smart! 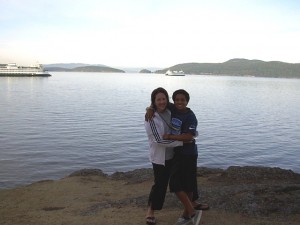 Mom and son enjoy a glorious 4th of July weekend

We let the boys hop out of the car to run around the beach. Then Jennifer started edging the car forward in the line. Next thing we knew the line didn’t stop rolling…yikes! I had to jump out and run, yell and simultaneously try to dial my son’s cell phone number, to get the kids back in the car. Miraculously! We actually squeezed our car/van caravan onto that 2:30 p.m. ferry. The camping gods were smiling on our little group after all.

With that auspicious beginning, our vacation commenced. Lopez is small island with a population that swells from something like 800 year-round residents to hundreds of thousands in the summer. Especially on holiday weekends.

We found our campsite, located at Spencer Spit State Park, near the water but in a forested area, and set up two tents, a canopy over the picnic table, and multiple chairs around the firepit. 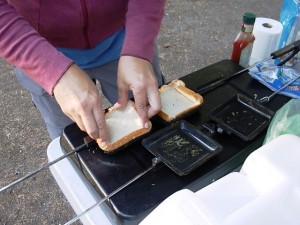 Jennifer gets the fixin's ready for a pocket pizza, camping style

For dinner, Jennifer had planned “Cook-your-own sandwiches.” She has amassed a great collection of camping accoutrements, including several hinged, cast-iron sandwich-makers with long handles. They are called Pie Irons (and you can purchase them for approximately $15 each). 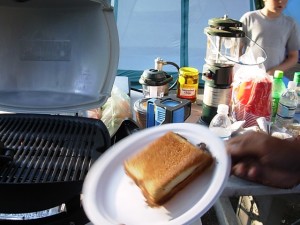 Hot off the griddle - a Hobo Sandwich!

Butter the inside of each 4-by-4 inch tray (about the size of a bread slice) and lay bread in both.  Add cheese, pepperoni and tomato sauce to make a pocket pizza; Or just use the cheese to make a grilled cheese sandwich. And for dessert, use the bread as “crust” and add apple or cherry pie filling to make a one-person piece of pie.

The “cooking” occurs by sticking the square end over the campfire or on the campstove. Heat for a few minutes on one side; flip it over and do the same on the other side. When you finish and open up the hinged sections, the finished sandwich, calzone-like pizza or sweet pie is ready to eat.

I told my friend Robin about our fun grilling experience. And she proclaimed: “Oh, my husband used to make those when he was a kid! They’re called Hobo Meals!”

The architecture of Lopez fascinated me when I was there in 2004 and again on this trip. In the center of town there is a restored 1914 water tower and pump house. Tall, square and slender with the look of a lighthouse. It has weathered shingle siding and tiny windows. As it turns out, there are several of these structures on the island; I even saw one incorporated into the corner of a residence.

There is something very appealing about these towers. They are utilitarian as well as incredibly beautiful. They have that New England, maritime architectural style (reminiscent of Cape Cod, Mystic Seaport, Rockport). Having lived in New England as a young girl, these salty, breezy edifices felt comforting to me. And permanent. Jennifer and I walked around “downtown” Lopez and snapped photos of cool architecture. Here are a few that captured our imagination: 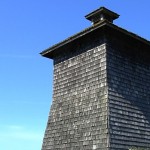 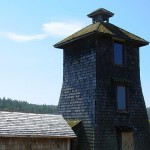 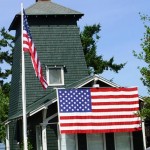 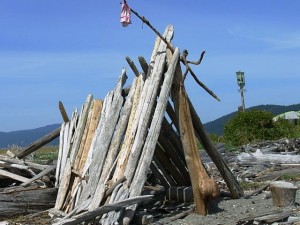 We spent a lot of time beachcombing, and apparently, so did others.

The driftwood that washed up on the beach is obvious inspiration for shelter-builders who stack, pile, lean and construct temporary driftwood shelters.

Here is a beautiful, open-air A-frame made from driftwood (see left). It reminds me of the human urge to create shelter.

Wherever we are; whatever materials are at hand. We find a way to establish “home” for ourselves and our loved ones.

Another structure occupied the beach at Spencer Spit. It was a replica of the original fishing house that once stood here. Simple, clean lines. Open to the air. A shelter in the truest sense of the word. Again, it filled that yearning void for enclosure, safety, comfort and protection from the elements. Open and inviting to anyone who happened along this stretch of beach. I love the “spaces” that create view-framing windows through which to enjoy the gorgeous water, island and maritime views: 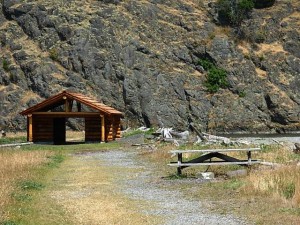 The fishing hut on Spencer Spit 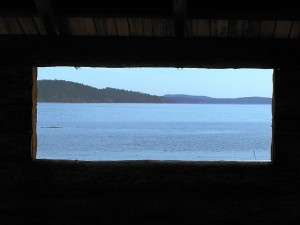 This entry was posted on Sunday, July 26th, 2009 at 9:47 pm and is filed under Creativity, Sheds & Havens, Spiritual Practices. You can follow any responses to this entry through the RSS 2.0 feed. You can leave a response, or trackback from your own site.