UPDATE: All four sets of FREE tickets have been claimed, compliments of Charles Trotter, show producer. 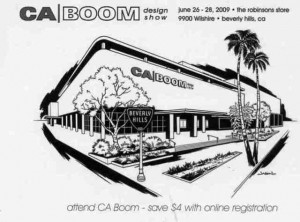 I originally learned of CA|Boom when I was still living in Seattle. My friend Ryan Grey Smith, creator of Modern Shed, exhibited at the first CA|Boom Show. He had a great response — from the public and the press – to his simply designed, prefabricated sheds. Little did I know then that I would move to LA in 2006! I attended CA|Boom in 2007 to find an exciting, inspiring and comprehensive introduction to contemporary design from A to Z.

A favorite place for incubating companies and products making their debuts, the show draws both the design trade and design savvy consumer. CA|Boom has grown exponentially in its complexity and hipness, combining everything relating to modern design under one roof. This season’s lineup features domestic and international designers, furniture and home manufacturers and architects.

You can also sign up for shuttle tours to never-before-seen LA architecture, including the Sunset Plaza residence designed by Assembledge+, an LA-based architecture, development and sustainability design firm. (PS, I toured it today and – WOW – what an amazing project. Read on for details . . . ). You can also visit Pierre Koenig’s Case Study House #22, aka The Stahl House, as part of special shuttle tours on Friday and Saturday. 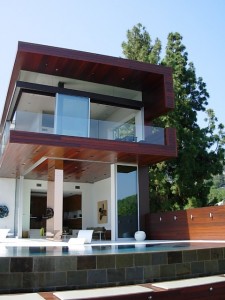 One of the 5 homes on the June 27-28 CA Boom Show's LA architecture tour, designed by Assembledge

Today, the press was invited to tour the Sunset Plaza house and meet its designers, Kevin Southerland and David Thompson of Assembledge+. I headed to LA with my friend Jennifer Gilbert Asher, garden designer, artist, and co-creator of TerraSculpture (check her out in the July issue of Garden Design!).

We walked into the house and were assaulted – in a good way – with the breathtaking view of a gorgeous infinity pool that drew our eyes to the LA skyline. We met owner Brad Blumenthal, who graciously opened his home for CA|Boom tours.

I said, “oh, I understand you worked with the design firm Assembledge (which I pronounced with my 11th grade French accent as “aah-sim-BLAAGE”). 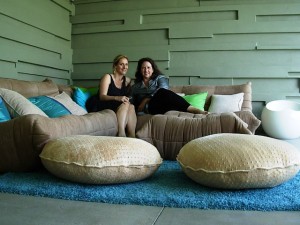 Jennifer Gilbert Asher and me in Brad Blumenthal's "Hideaway Lounge"

Obviously, that was too funny to Brad, who just started laughing and speaking to me in French.

Duh. I guess the firm’s name is pronounced “a-SEMM-blidj,” with hard vowels, Americanized.

That was the funniest moment of the day, but it kind of endeared us to Brad (I hope) and to his awesome architects, Kevin and David. The three of them actually gave Jennifer and me a personal, guided tour of the home – upstairs and down. 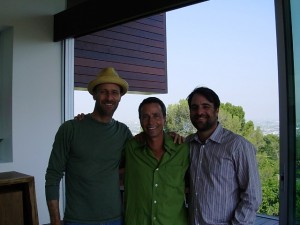 Theirs is an unparalleled design project that defines modern architecture for the 21st century. I’m still marveling at the sleek lines and forms that incorporate rich, organic materials. In true California Living style, the outdoors is invited into every room. The dramatic, 180-degree view is a sight to behold.

We were drawn to the terrace, where the interior terrazzo continues to the pool’s edge, completely extending the notion of “room” to an open-air setting. When viewed at a certain angle, the two lounge chairs, aka “Wave Chaises,” in cast fiberglass (from Float, a Philadelphia design studio), look as if they’re floating on the water’s surface. 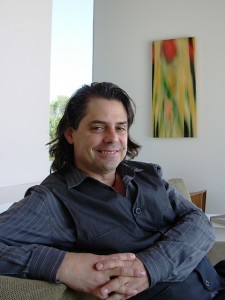 I sat down with Charles Trotter (right), founder and producer of CA|Boom, and asked him how things were shaping up for next weekend’s show:

Q. Tell me about this year’s new venue, in the vintage Beverly Hills building that once housed Robinson’s flagship department store:

A. We had an opportunity to reintroduce a building of that style and design from the 1950s. We will feature beautiful Julius Schulman photographs of the building, lent by the Getty. People may forget how stylish the design of this building was in the context of its 1950s architecture.

Q. How big is the show space?

A. It’s abound 30,000-square-feet, which is the same as the Barker Hanger (CA|Boom’s former home at the Santa Monica Airport). But there is more exterior space.

Q. CA|Boom is more than a trade show. It seems like a “happening.” How do you make that work?

A. Many of our exhibitors use the show to debut products. We’ve definitely reinvented the idea of a “trade show.” We’re attracting a new generation of audiences and it’s giving exhibitors an opportunity to influence a design-savvy end user.

A. The architects feel this is their show.

Q. Charles, you know I am particularly interested and excited in outdoor living design. What new and innovative design can you tell me about? 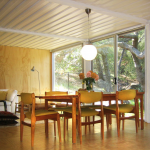 The warm, inviting interior of an IC Green Container House

A. I.C. Green’s Container Houses are a new pre-fabricated project. Of all the modernist pre-fab we’ve seen, this is hitting the right price point. They will be debuting a 600-square-foot studio, like a  “Granny Flat,” using portions of a shipping container. It’s the most sophisticated durable good that’s been made. You can even put multiple ones together. This has a lot of promise

[Note: This is a description from CA|Boom’s web site: I.C. Green’s Container Houses follow the “principles of modularity with a high degree of flexibility within the system.” The used shipping containers reappropriated as homes provide a frame that is structurally strong, facile to transport and a rectangularity that suits the modern aesthetic of an “open plan” home. Off-site prefabrication/adaptive reuse greatly reduces construction costs and time. Material finishes and energy systems can be used to create additional clean energy performance of the Container Home.] 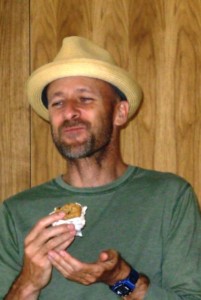 We ended our tour and interview with an afternoon snack, a hip Coolhaus ice cream sandwich!

Coolhaus is a modern take on the traditional ice cream truck that is all the Twitter-rage around LA. Oh, P.S., Coolhaus will be selling these mouthwatering archi-treats at CA|Boom next weekend.

High concept ice cream sandwiches are named for modern design icons: Frank Behry, Mintimalism, Oatmeal Cinnamoneo (Jen had this one, but it was melting fast in today’s 80-plus temps), Mies Vanilla Rhoe and IM Peinut Butter (my choice).

This entry was posted on Friday, June 19th, 2009 at 12:39 am and is filed under Architecture, Creativity, Furniture design, interior design, Landscape Design, Spiritual Practices. You can follow any responses to this entry through the RSS 2.0 feed. You can leave a response, or trackback from your own site.