Peace by Design: My TV show 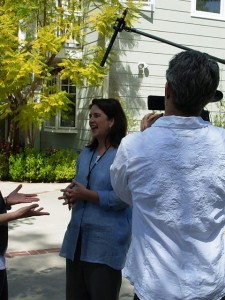 Filming the pilot episode of "Peace by Design"

My friends know I am a PRINT person – I love magazines, newspapers and books. I’m kind of okay with the Internet, because blog posts and web sites still involve using letters to compose words and words to create sentences . . . all of which are ultimately read as the printed word.

So this week has been one of those out-of-the-comfort-zone experiences as I “played” at being a television host. Robert Schauf, my amazing and intuitive producer, keeps telling me that talking to the camera is just like talking to a friend (a conversation!). . . and I’m starting to believe him. I just have to imagine all my friends hiding behind the HUGE black lens held by the cute camera guy, John. And then, just talk. Naturally.

Okay, I need to back up. I met Robert Schauf in 2006. It was one of those Kismet moments. It will sound so cliche, but we met on an airplane flying on business class from Burbank to Newark (a Jet Blue flight). I’m pretty unfamiliar with business class, but somehow I was bumped up to that rarefied section because it was the last seat on an overbooked flight. I was on my way to speak to a garden club in New Jersey and absolutely had to make that flight or I would miss the lecture entirely.

Robert, who hops comfortably back and forth between NYC and LA, was returning from a business trip. How do I describe him? He’s tall and slender, he wears the kind of clothing that my teenage son might wear (hip jeans, long-sleeved t-shirts, lace-up Keds) and his shocking white-platinum hair kind of sticks out all over his head. Robert has that Rocker-dude look and frankly I didn’t know what to think of him at first. But we talked nonstop for something like 5-1/2 hours. I was so fascinated with his stories of producing television specials and working on the Grammys. I told him about my new project – about garden sheds! – and described my plans to scout sheds in the Hamptons and NYC after I finished my New Jersey lecture. We exchanged business cards and subsequently swapped a few emails. That was it. 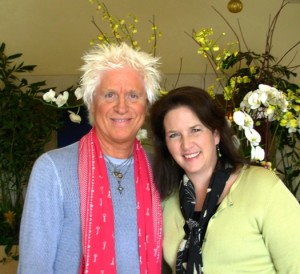 But Robert was in the back of my mind when Stylish Sheds and Elegant Hideaways was published last spring. I emailed and asked for his address because I wanted to send him a copy of my new book and an invitation to the book-launch party in Sandy Koepke’s Beverly Hills garden. We didn’t connect with one another then, but Robert saved my email and when he was in LA for Thanksgiving, he called me. After we chatted, I mailed him my book. To my surprise, he called to say how much he liked it and shouldn’t we talk about doing a show together?

That explains a bit about how I found myself, over the past two days, learning how to look natural on TV. Robert is convinced that since I held his attention for that lengthy plane trip, I can hold an audience’s attention (how’s that for an endorsement?). As I recently wrote to one of my editor friends: The print world is changing so swiftly that I feel like I have to be open to every other opportunity, including broadcast.

The sum total of my television experience is doing an episode of Ciscoe Morris’s “Gardening with Ciscoe” on KING-TV in Seattle, a two-day shoot with Romantic Homes magazine for a segment of “Outer Spaces,” a former HGTV show (with Susie Cuehlo) and my interview last summer with Bill Wright when we were guests of Tom Spencer on “Central Texas Gardener.” 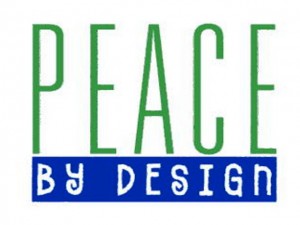 Let’s see, that’s about four days of experience since 2005. I’m so out of my element here, but (so far) Robert and his production team (Gina and Richard) have made it painless for me. They’re all incredibly wonderful – and fun!

The working title for our show is “Peace by Design.” It came out of their response to all my work – the Stylish Sheds book, my book on Abundant Gardens, my magazine and newspaper design articles and our conversations. “It’s reflected in everything you write about,” Robert says. “You’re interested in telling stories of peaceful places and the people who create them and live in them.” Richard Stern designed the really cool graphic treatment, seen here:

Here’s one of my very first FLIP camera movies, taken of Robert during our show development meeting in February:

About PEACE by DESIGN: How do you turn a this big idea into something people actually want to watch on television or online as a webisode? Of course, since I’m a total nobody, you have to layer in the celebrity sizzle. Wouldn’t it be fun to meet Leonardo DiCaprio and talk about his environmental passion, tour his rooftop garden and see his own “peaceful” place? Robert has that facet of the programming covered through one of his longtime producer-colleagues who is rumored to have the best Rolodex in Hollywood. We will visit movie, television and music celebrities in their private homes and gardens. Clearly this secret ingredient will help make the show compelling to a producing sponsor. As the host, I’ll be there to move things along and keep the conversation going. I think it will be a blast! 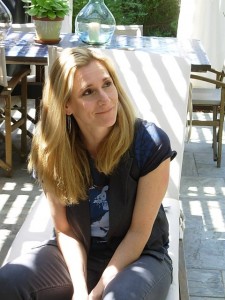 Before I go any further, I have to deliver a huge, virtual hug and thank you to Jennifer Asher, landscape designer, artist and creator (with her partner Karen Neill Tarnowski) of TerraSculpture.

Completely on a whim, only this past Sunday, I suggested to Robert that we try and find a place other than my own back yard to rehearse. I knew Jennifer’s garden was filled with her awesome sculpture pieces, because I had toured her landscape for a design column I wrote several months ago, “Gardens as Galleries.”

Not only did Jennifer unhesitatingly say “yes” to receiving Robert, Gina, Richard and me for Wednesday’s rehearsal, but she totally saved the day by stepping in as our interview subject on Thursday.

We had planned to tape a celebrity segment, but, alas, our star had to bow out because he was cast in an episode of “30 Rock.” Oh well, that was a much better gig than ours. Without Jennifer, we would have been toast. And Karen was on hand to help in so many ways she never could have imagined, including taking a ton of great photographs, helping move sculpture, bringing bottles of water and even holding cue cards. They are truly the “angels” who blessed this endeavor.

Here are some behind-the-scenes photos. If anything, they remind me that we really did have fun. A huge thanks to all the great talent who worked on this. I’ll introduce them here: 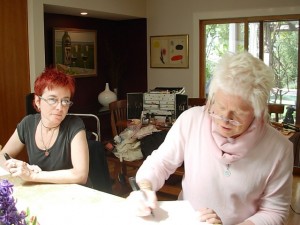 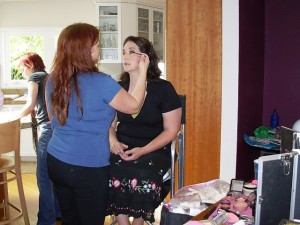 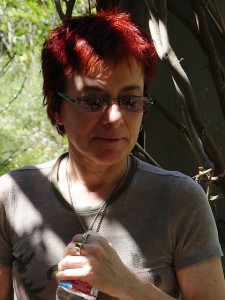 Gina, totally on top of things 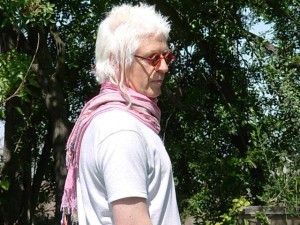 My very own "love ya baby" producer 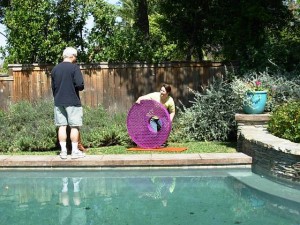 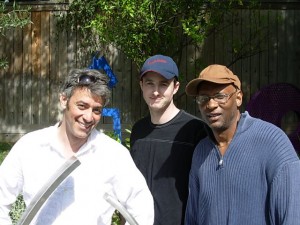 John, Aaron and Rex, the cutest, sweetest team of camera and sound guys around!

A programming note: Now that the fun part is over, we have to sell the show. Robert is working on that end, thank goodness. We might team up with a single lifestyle sponsor. We might broadcast this first over the Internet. Time will tell. A grad school friend of my husband’s, who has developed a reality show, gave me some really good advice: You have to divorce yourself from the selling part. It’s completely separate from the creative part and creative people are NOT selling people. I think that’s sound wisdom.

This entry was posted on Friday, March 27th, 2009 at 6:45 pm and is filed under Creativity, Entertainment, Landscape Design, Playfulness, Writing. You can follow any responses to this entry through the RSS 2.0 feed. You can leave a response, or trackback from your own site.

26 Responses to “Peace by Design: My TV show”