In my own backyard: California’s Channel Islands 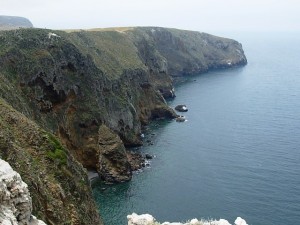 A view down the rocky coast of Santa Cruz Island

This won’t be a long post because it has been a long day. But I have some images to share from today’s field trip to Santa Cruz Island, which is part of a string of eight small islands forming the Channel Islands off the California coast (between Santa Barbara and Long Beach). Perhaps the most famous is the glamorous Catalina Island. But since I wanted to see nature and take a break from the freeways and noise, the remoteness of Santa Cruz was appealing.

My companion Paula Panich has ventured to Santa Cruz twice before by herself. She suggested a day trip over the holiday weekend and we both arranged to be away from our families for a good part of the day. It started by booking our passage through a commercial boating company called Island Packers. We each spent $48 for the round-trip journey. The boat left the Oxnard Harbor at 9 a.m. We boarded and sat up on the top deck, along with other pleasure-seekers, cameras and small video recorders around their necks. No one was disappointed by the 90-minute crossing, thanks to a playful performance from dolphins, including several that seemed to want to “surf” in the boat’s wake. 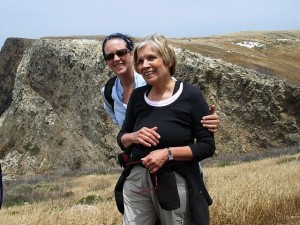 With my friend Paula, on the trail

Paula had prepped me for this trip, helping dictate a list of what I should bring: 2 bottles of water; 2 bottles of Gatorade; a fanny pack and a backpack; nuts and dried fruit; a hat and sunscreen; polar fleece and a rain jacket; hiking shoes. I added my fav hiking food – hard cheddar cheese and salami, along with crackers.

The thing is, Santa Cruz is one of four northern islands that make up the Channel Islands National Park. The only amenities on this rocky, isolated destination are a few port-a-potties and potable water. You can plan ahead to camp or kayak here but everything you bring in . . . you must pack out.

We got off the boat at 10:30 a.m. and checked our watches: Four Hours. Before hiking, we wandered through the historic displays that covered Santa Cruz’s background dating to the first indication of human life there 2,000 years ago. Those humans were probably the ancestors of our local Chumash Indian tribe. European settlers had their moment in time here, too, unfortunately. This island was home to sheep, cattle and pig ranching over the years. Paula and I kept asking ourselves: Who would transport livestock to this island to “farm” when there was still a ton of good, undeveloped property on the mainland a century ago? Ridiculous. 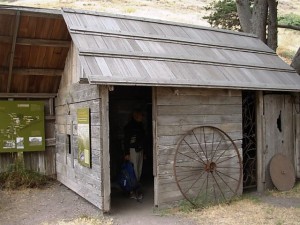 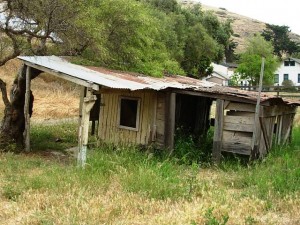 A relic of undetermined provenance

But, of course, we were tickled to see the remains of a few “sheds.”

There you go. Sheds are everywhere.

The natural beauty of Santa Cruz, though, made everything man made look uninspired. The terrain blew our minds. I kept saying: “It’s otherworldly.” Finally, Paula said it reminded her of Iceland, an otherworldly place she visited last October. When we hiked up to a bluff overlooking the Pacific Ocean to the southwest and the Santa Barbara Channel to the northeast, I was struck by how varied the geography is here. 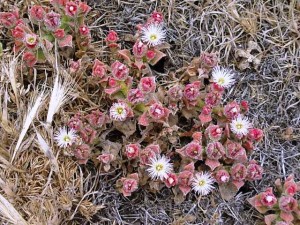 On land, it’s desolate, dry and hilly (the livestock ate most of the native vegetation, but there are efforts to reintroduce native plant species). On the perimeter, it’s rugged, weather beaten and dramatic, where the sheer face of the island exposes itself to the sea.

Here’s a paragraph from the National Parks brochure we picked up:

Santa Cruz Island: Here are pristine beaches, rugged mountains, lonely canyons, grass-covered hills, and some animals and plants that you have never seen before. This paradise is Santa Cruz Island, a miniature of what southern California looked like more than 100 years ago. The largest island in the national park, with 61,972 acres, Santa Cruz is 22 miles long and from two to six miles wide. A central valley splits the island along the Santa Cruz Island fault, with volcanic rock on the north and older sedimentary rock on the south. Today, the Nature Conservancy and National Park Service preserve and protect the island. 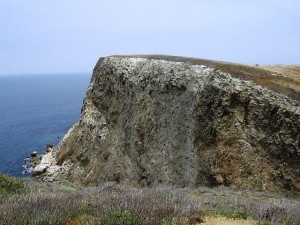 We spent most of our time just staring at the rock formations and speculating about what force of nature had shaped them in which millennium. The trails were narrow, single-file style, and perilously close to the edge of cliffs and bluffs. But we felt more exhilarated than frightened.

Our clock wound down to 2:30 p.m. and we had to make our way back to the pier to re-board the return boat. This morning, I worried about what on earth we would do to fill 4 hours on an island, one with no tree cover, few places to sit but on the ground, and lonely views of water and rock all around us. But breathtaking scenery, good conversation with a close friend, a zip-lock bag filled with nuts and dried fruit, a few cheese-and-salami bites and – wow – time flies.

I can’t wait to schedule a return visit. Just think, only 30 minutes away from home is the boat that will bring me back to the wild place called Santa Cruz.

This entry was posted on Sunday, May 24th, 2009 at 8:59 pm and is filed under Creativity, General, Plants, Shed Glossary, Sheds & Havens. You can follow any responses to this entry through the RSS 2.0 feed. You can leave a response, or trackback from your own site.

3 Responses to “In my own backyard: California’s Channel Islands”