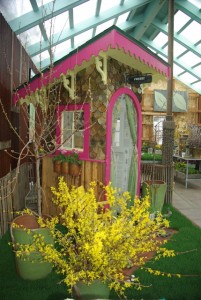 The Cozy Shack, Designed by Scotty Thompson and Suzanne St. Pierre of "Living in the Garden," a cool Pullman (Wash.) garden emporium

I love it when I receive surprise “Shed-Mail” from Shedistas like Suzanne St. Pierre. Suzanne and her husband Scotty Thompson own Living in the Garden, a cool nursery/emporium in Pullman, Washington. We’ve swapped a few emails, originally prompted by Suzanne’s note saying she loves Stylish Sheds as much as I do.

Recently, while planning their own version of a spring flower show, Suzanne and Scotty recycled an old cedar outhouse from their 2-acre property and tricked it out to be a too-cute cottage for their nursery. She sent me a sweet note and some photos and gave me permission to share them with you.

Hello, inspired by your Stylish Shed book, my husband and I jazzed up an old outhouse we had on the property (to use) for a focal point in our Sweet on Spring event at Living in the Garden. It was a hit!! I wanted to thank you for the inspiration and tell you that I enjoy your blog.

I just caught up with Suzanne by phone and we had a good ol’ gab. It felt like I was talking with a long-lost friend. She described how this little structure found its way from humble to haute:

Originally, the cedar “box” was an outhouse over a pit toilet. The couple actually used it while living in their tiny “sugar shack” when they moved to the two-acre property about six years ago. After they built their residence and started running the nursery, they had a “real” indoor bathroom, so the 3-by-3 foot outhouse was no longer needed. “We filled in the pit and just moved the building around,” she says. 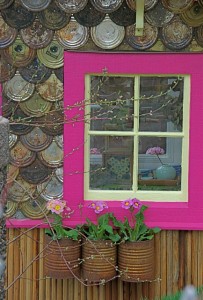 With shingles made from flattened tin can lids and hot pink trim, this is an outrageous outhouse!

When preparing for Living in the Garden’s “Sweet on Spring” event last month, they decided to create several indoor garden displays (it’s still pretty chilly out there on the Palouse in March). As Suzanne explains, “We wanted to create our homage to the Northwest Flower & Garden Show.”

Once she and Scotty decided to dress up the rustic outhouse, the creativity exploded. Suzanne told Scotty: “We have to use everything we already have on hand.”

Like most artist-builders (Scotty is “incredibly handy and artistic”), the couple has all sorts of project piles and cool materials had saved for future endeavors. Clearly, they love to re-purpose what others might toss into the landfill.

This detailed photo illustrates how they used flattened tin cans, layered like gingerbread shingles, to clad the upper portion of the structure. Scotty added a window and the arched doorway, plus the cool corbel-style brackets and scallop-trim fascia board around the shed roof.  It even has a skylight! I’m dying to see an indoor shot (maybe Suzanne will send it to add here!) because apparently she decoupaged the interior walls with pages from old gardening books someone had given them. I guess Suzanne broke her own rule about using on-hand materials when it came to paint. She confesses that she did actually buy the hot pink paint as a finishing detail. Fancy! 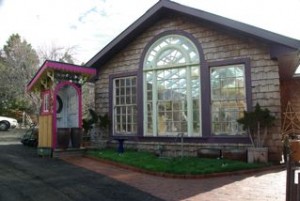 Cute Outhouse (left) outside the gorgeous conservatory, built by Scotty Thompson of Living in the Garden

I love this couple’s philosophy of truly LIVING IN THE GARDEN. Suzanne grew up in a family nursery and purchased and ran her parents’ former nursery for 12 years after graduating from college with a horticulture degree.

“But I burned out. I was never getting my hands dirty,” she confides. Several years (and a career in the wholesale plant trade) later, Suzanne realized how much she missed retail. “I just wrote on a piece of paper what the perfect job would be: Work from home. Work with Scotty. Work 4 months of the year for 4 days a week.”

Wow. How seldom do any of us have such an honest conversation with ourselves? Guess what? For the past six years, Suzanne and Scotty have been doing exactly what she wrote down on that page. “My commute to work is just 113 steps,” she jokes. “We’re working on our farm and making people come to us. It’s really wonderful.” 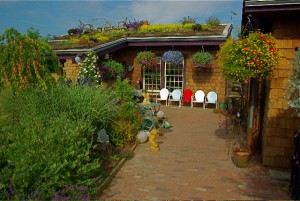 Living in the Garden's green roof

Living in the Garden is open from March through June (Thursdays through Sundays). Earlier in the season, beginning in February, Suzanne starts work in their production greenhouse, growing geraniums and plants for their own hanging baskets. By summer, the couple is off on trips in their camping van (complete with solar panels on the roof!) and touring around the Northwest and beyond to see other nurseries and commercial greenhouses.

They believe in “marketing with a cause,” so during the summer months Suzanne and Scotty encourage local charities to use their extensive and beautiful display gardens for fund-raisers or donor-appreciation events.

By September, just about the time Suzanne is “missing” her customers, Living in the Garden opens for one spectacular autumn weekend.

When you arrive, don’t be surprised to hear the mellow sounds of Gregorian chants drifting through the garden and conservatory. “Gardening is my religion,” Suzanne concludes.

Check out the nursery in person or read more at Suzanne’s blog, Living in the Gardens.

This entry was posted on Tuesday, April 21st, 2009 at 1:40 pm and is filed under Architecture, Creativity, Gardening, Plants, Playfulness, Shed Glossary, Sheds & Havens. You can follow any responses to this entry through the RSS 2.0 feed. You can leave a response, or trackback from your own site.