Los Angeles to Seattle to Yakima. Back to Los Angeles, via Seattle. Two snowstorms and lots of rain. Heavy doses of friendship. 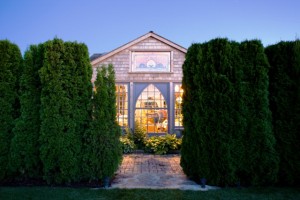 The perky roofline of Michelle and Rob Wyles's hedge-enclosed gardenhouse is seen in relief against an expansive eastern Washington sky, photographed by William Wright

Spring may have arrived on March 20th, but it still feels like winter in the Pacific Northwest and there I was, loving it! But to the person, my gardening pals on both sides of the (Washington State) Cascades are sick of this unfriendly weather (unfriendly, at least, to gardens, plants and gardeners).

I flew out of LAX on Monday, arriving in Seattle around 3 p.m. Not wanting to bug any of my hardworking friends, I hopped an express Metro bus from the airport to downtown’s new transit center. That $2.50 bus pass, which even included a transfer to the Number 14 city bus, got me all the way to Mt. Baker neighborhood, where I walked a few short blocks to my friend Jan’s.

She graciously lent me a bed and use of a car – not for the first time – and it felt like coming home to a place I know so well. I walked these sidewalks with my newborn son Benjamin during the summer of 1992. I feel like I have every front yard, every border, memorized. I love the perspective of the often cloud-streaked sky looming above Lake Washington. I love the tall Douglas firs and the western red cedars, the old, overgrown rhododendrons, the Craftsman architecture. This place holds good remembrances.

But it is cold here this week, colder than when my sons and I visited for the Northwest Flower & Garden Show in February. That week – Presidents’ Week – was sunny and blue-skied, with temperature in the mid 40s. Picture perfect and perfect for one’s mood.

On Tuesday morning, Lorene Edwards Forkner arrived in her trusty All-Wheel Drive Subaru and we began our 3-hour drive east to Yakima – over the Snoqualmie Pass and into Eastern Washington.

It was raining lightly; the air was cold and damp, for what is supposed to be springtime already. As we passed through North Bend and started climbing up toward the summit, the scene on either side of the freeway was cloaked in white. Beautiful, if you like a Christmas card image of dark blue-green conifers frosted with dollops of snow. But brutal for the driver. We slowed down to a snail’s pace at the peak- where truckers literally stopped in the middle of a lane to put on their chains and the little people (the cars, and their drivers, that is), skulked over to a single lane and crept through the pass at single-digit speeds.

With the snow behind us, our arrival in Yakima was cause for celebration. We stopped at Linda Knutson’s and Ron Sell’s, fellow Northwest Horticultural Society members who have always generously shared their four-acre, arboretum-like landscape with visitors. They participate each year in the Northwest Perennial Alliance Open Garden schedule (if you really want a treat, plan a day’s trip to Yakima to see it!)

Linda and Ron focus on texture, color, form using mostly conifers, ornamental grasses, woody ornamental shrubs, stone and artwork. Lorene and I remember with fondness our visit there in October 2005 when I led the NHS weekend tour to Yakima. 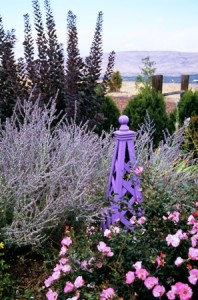 A delicious autumn scene at Linda and Ron's, which to me perfectly illustrates an analagous color scheme in plants and art

The weather was pretty unforgiving (brisk and very windy), but after a delicious spanakopita lunch, we bundled up and took a spin around the place. We stayed mostly on the pathways, but we stooped down to observe new crocuses, species tulips, galanthus, chionodoxa and (possibly) pushkinia bulbs poking their heads out of the soil. “These plants are a month behind my Seattle garden,” Lorene observed. “And my Seattle garden is a month behind its usual bloom time.” That tells you a lot about the vagaries of the Pacific Northwest winter of 2008-2009, but Linda and Ron insist that Yakima has been spared much of the snow-dump that hit Spokane and other parts of Eastern Washington (even still, we woke up to snowfall Wednesday morning, April 1st!).

Later, we met up with shedista Michelle Wyles at Garden Dance, her adorable “fashion and frou-frou” clothing emporium in downtown Yakima. She has one of the best pair of eyes for spotting innovative apparel and interior styling I’ve ever seen.

All you have to do is see how Michelle has created and adorned her charming “shed,” photographed by William Wright for our book, Stylish Sheds and Elegant Hideaways, to know what I mean.

Michelle has had a wide and varied career, including raising alpacas (Right now, the attention-getting creatures at Michelle and Rob’s home/farm are the Guinea hens. What funny poultry!) 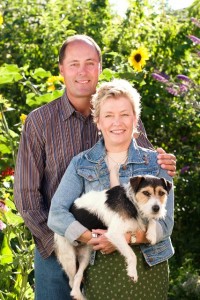 Her garden antiques and retail business has morphed into fashion: Garden Dance is housed in Yakima’s turn-of-the-last-century train station. For about an hour, Lorene and I browsed and oohed and aahed to our heart’s content, while Michelle and her girlfriend/sales associate Stephanie helped guests and handled customers. For some delicious (virtual) retail therapy, read Michelle’s lighthearted blog, linked to her web site.

After they closed shop, we walked across the street to Gilbert Cellars, a cool wine-and-cheese bar that you might expect to find in Seattle’s Belltown district or in Santa Monica. A sampling of artisan cheeses and a sip of wine fortified us for delaying dinner until after my 7 p.m. lecture finished!

My lecture, “the Ultimate Garden Hideaway,” was the final of a four-part lecture series hosted by the Yakima Co. Master Gardeners. Held at the beautiful Yakima Area Arboretum, the lecture series was the brainchild of several incredible volunteers and MG staff, including our fellow GWA member Jim Black. The “Outdoor Room”-themed lecture series included Michelle Wyles and Linda Knutson as prior speakers.

We had a great, sell-out gathering of enthusiastic folks, from shed owners who treated me to stories of their own backyard hideaways, to shed wanna-be’s who had big dreams for their future PODs (Personal Outdoor Dwelling).

As always, I feel so at home with these “peeps,” the Master Gardeners of the world who are truly citizen-volunteers, generous, pay-it-forward folks concerned with educating and inspiring everyone to embrace the traditions and skills of growing edible and ornamental plants. 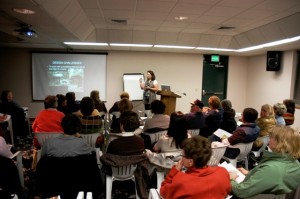 Thank you to the Yakima Master Gardeners and the Yakima Area Arboretum for hosting me, and to Michelle and Rob Wyles for housing (and feeding) Lorene and me on Tuesday night. By the way, we woke up to more snow and had fun watching the Wyles poultry population racing around in the cold weather. What a hoot! (Sorry, Lorene, about locking you out of the guesthouse while I was showering away to my heart’s content. I’m glad you’ve thawed out!)

Lorene and I made it back to Seattle pretty quickly. Well, that is AFTER we spent close to an hour searching for a hard-to-find address of a Yakima trailer park (North Acres) to track down the good Samaritan (?) who called me on my cell phone with news that he had found my camera in the parking lot of Gasperetti’s Restaurant in the wee hours of April 1st. I will let Lorene have the honor of blogging about THAT experience. I just checked her terrific blog, Plantedathome.com, and I’m surprised (and a bit relieved) that to date, the photos of that “doo dad” decorated residential trailer have not been posted. Given the blackmail potential, that may be good news. I’ll await Lorene’s decision! 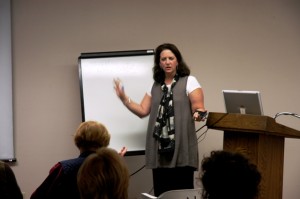 All in all, this was a good trip. I felt like the Energizer Bunny, squeezing in more friends and networking encounters than anyone could imagine. I had a wonderful evening with the Woodinville Garden Club (thank you to Susan Latter for the invitation to speak), and several excellent encounters with creative people (the subject of future blog posts).

I’ve been home in Southern California for about 36 hours and I can’t wait to stay here for a while. I can’t imagine leaving my family or my garden for one more moment. It’s hard to believe, but I have traveled on seven adventures since I went to Orlando in mid-January. As inspiring and exciting and stimulating as these lecture venues, flower shows, press junkets and garden tours can be, I know they just delay me from sinking my roots deeper in the patch of earth for which I’m responsible. So it’s time to stay put for a while.

This entry was posted on Sunday, April 5th, 2009 at 3:18 pm and is filed under Creativity, Gardening, General, Landscape Design, Plants, Playfulness, Shed Glossary, Sheds & Havens, Writing. You can follow any responses to this entry through the RSS 2.0 feed. You can leave a response, or trackback from your own site.