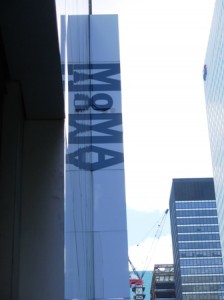 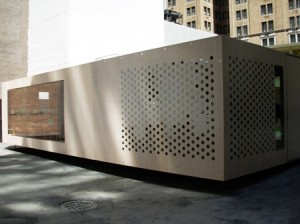 The Prefab architecture movement has not been lost on those of us who think we’re hip to design trends. Yet the 21st century prefab building-boom has a centuries-old foundation. Would it surprise you to know that such illustrious inventors, architects and designers as Thomas Alva Edison, R. Buckminster Fuller, Charles and Ray Eames, Jean Prouve and Frank Lloyd Wright dabbled in prefab?

It’s good to look to the context of the past as we study the present and predict for the future. Several years ago, I wrote a newspaper article about the “manufactured home” industry. The house my photographer and I toured and documented was Victorian-style; it was literally factory-built in Canada and shipped, in flat-paneled sections, to Washington state for on-site assembly. There was nothing in its exterior detailing, charming turret and wraparound porch, nor in its gracious interior parlour, dining and living rooms that smacked of a stereotypical “double-wide.” My assumptions about design were turned upside down – and to my and my editor’s surprise, our story was picked up by newspapers around the country. The interest in manufactured homes was due in large part to the affordable and sustainable solutions to costlier custom-built versions.

In recent years, I’ve been exposed to a clever collection of prefab sheds, smaller versions of the manufactured home of the last decade. My shed-seeking journeys have led me to discover innovative shelters with four walls, a floor, a roof and a variety of window-and-door amenities – created by today’s designers. You can read one such review from my visit to the Dwell on Design LA exhibit this past June.

The pages of Stylish Sheds and Elegant Hideaways feature a chapter called “Rec Room,” in which one of Ryan Gray Smith’s sleek Modern Sheds grace a small LA landscape. I really love the way Ryan’s groovy, uncomplicated design solves a space problem for the person who wants to add a studio, atelier, guest room, office, party suite, etc., without building a full-blown addition to the house. And that’s just one architect’s interpretation. 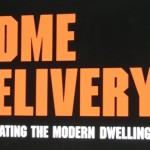 Prefabricated architecture is the subject of “Home Delivery: Fabricating the Modern Dwelling,” a new exhibit at the Museum of Modern Art in Manhattan (on exhibit now through October 26th). If you find yourself in Manhattan, plan to visit it. Lucky for me, I had a last-minute trip to NYC last weekend and was able to spend a few hours at MoMA Saturday morning.

I learned about the show from LA-based designer Michael Jantzen, creator of the “M House,” a breezy, geometric structure formed by slotted and opaque panels that are hinged to fold into or out of the framed cubic space. A model of Jantzen’s creation is one of 100 architectural projects (in the form of film, architectural models, original drawings and blueprints, fragments, photographs, patents, games, sales materials, toys, and partial reconstructions) on display at MoMA. Spanning 180 years of design, the exhibit is on MoMA’s 6th floor. It is described as Part One of the “Home Delivery” show. You can find Part Two occupying an empty lot on 53rd Street, a door down from the Museum.

In the bare-bones lot stand five very different prefab dwellings, each commissioned by MoMA for the exhibition. The outdoor installation pays homage to the tradition of exhibition houses that is so famously associated with the Museum’s Abby Aldrich Rockefeller Sculpture Garden (apparently in 1949, MoMA displayed model houses in its courtyard garden, offering viewers real-life experiences with experimental modern living).

Here is a visual tour of the five environments, along with an explanation and comments about the design. Some of the information comes from MoMA’s attractive, 248-page book that accompanies the exhibit. 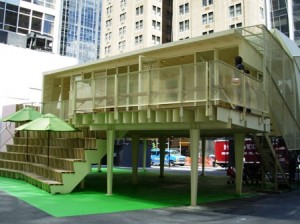 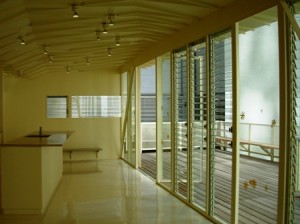 This house has three sections: each is intentionally assigned its own floor level. It was designed by architects Jeremy Edmiston and Douglas Gauthier, a New York-based team that created the first version of “Burst” as a summerhouse for a young family in a coastal hamlet in Australia.

They describe each section as a “band.”  The bleacher-like exterior steps create a band suitable for community activity; the interior space (above right) is a band for family activities of eating, gathering, work; and an elevated space at the back of the house holds a band of rooms for private activities, such as sleeping and bathing.

Relying on computer production models as the design tool, the architects used the project to streamline and customize their approach. They wanted to push the envelope using computer templates to customize a house to fit its owners’ needs. Once various templates are configured on the screen, the computer reconstitutes the prefab structure using a 3-D model. “. . . in a matter of seconds, the house is fully designed.”

The original house cost the equivalent of $250,000 US to create. But it served as a case study for future projects that could be more affordable. Like arranging a garment’s pattern pieces on a length of cloth in order to reduce waste, Burst’s pieces — all 1,100 of them — are numbered and efficiently arranged on 4-by-8 foot plywood sheets before being cut and assembled. 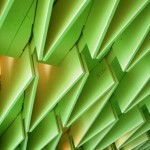 Burst*008 was engineered on a structural cage using irregular 3-D diamond-shaped latticework that consists of ribs attached by collapsible steel X-clips welded off-site (seen at left). There is a tensile strength to this design which makes the finished house durable in windy areas.

I found a comment from creator Jeremy Edmiston very revealing about the nature of prefabricated architecture: “Prefab isn’t about saving money; it is about controlling risk,” he said.

SYSTEM3, by Kaufman| Ruf Architects (exterior seen at the top of this page) 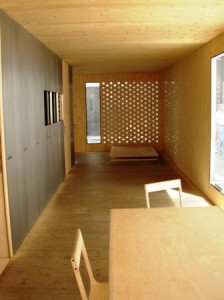 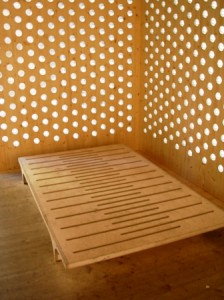 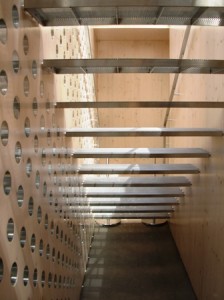 Created by Austrian architects Oskar Leo Kaufmann and Albert Ruf, System3 consists of single units, or pieces, that can be combined to create larger buildings and communities. Potentially, several units could be stacked to make a multi-floor house (thus, the staircase). The architects estimate the total cost of $130,000 for a single unit, once the manufacturing is fully operational.

As efficient wooden rectangular volumes, measuring 19-by-38 feet, each cube is self-contained. But multiples (stacked, staggered, pivoted, arranged in blocks of four or more) reveal infinite possibilities. The flat elements are made of solid slabs of 4-3/4 inch thick, unpainted wood. The “skin” of the structure includes prefabricated window elements, plus thermal insulation, waterproofing, and a vapor barrier.

Inside, the “serving” elements are stainless steel. Above are three photographs to illustrate interior details; from left: dining in the foreground/storage at left; a platform bed in the sleeping area; and the steps integrated into the cube, enabling access to a second cube that can be stacked to create a 2-story home. The architects estimate this system could climb up to 30 units arranged to create a 10-story, 11,000-sq-ft office tower. 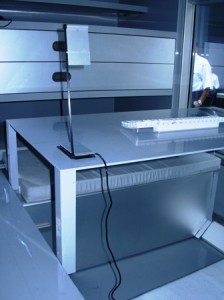 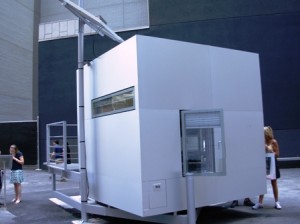 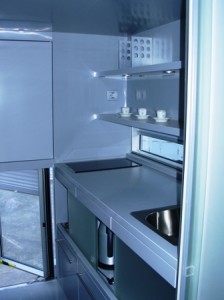 “Smart living for a short stay” is the slogan for this petite house-machine, designed in 2001 by British architect Richard Horden, with Haack + Hopfner Architects of Germany. The architects wanted to make a home that was small, well organized and environmentally friendly. In a 76-square-foot cube, they have packed all the essentials for living, sleeping, food preparation and dining, work and hygiene. It is constructed with a timber frame and clad in a panelized system of durable, flat anodized aluminum sheets. M-CH weighs in at 2.2 tons and it can be “craned” into difficult areas, such as a dense, urban or a remote setting.

Described as “the ultimate prototype for compact, efficient, and sustainable housing,” this sleek pod is very intriguing.  As a high-performance cocoon, it is “modern” in the highest sense of the word. Its creators use the term “modern” as “. . . specially referring to the absolute extraction of domestic vestiges of a predigital age such as books and personal papers as well as to the rejection of the collection of clothing, appliances, and other personal belongings beyond the absolute essential.”

Another descriptive phrase resonated with me: “Prosperity now is something entirely different: mobility instead of permanence, streamlining instead of acquisitiveness.”  Clearly, this compact home is intended for temporary living, or for the person in search of ultimate simplicity!

Digitally Fabricated Housing for New Orleans, by Massachusetts Institute of Technology School of Architecture and Planning 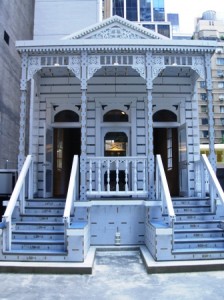 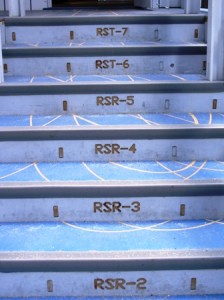 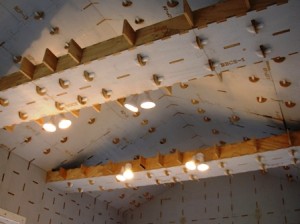 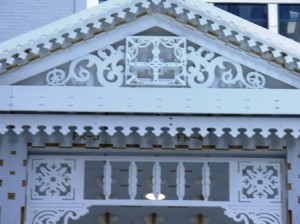 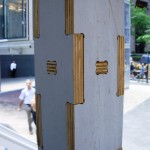 MIT associate professor Lawrence Sass has worked since 2004 to research a project dubbed the “Instant House.” He wanted to develop a way to use the speed and precision of laser cutters to fabricate simple shelters quickly and inexpensively. The laser cut technology uses notches and special grooves to join pieces of sheets of cut plywood using only rubber mallets (see detail, right).

After Hurricane Katrina hit the Gulf Coast in 2005, Sass and his students researched a way to use the Instant House technology to address the drastic housing needs in New Orleans. They designed a solution that pays homage to historical New Orleans architecture and created a 196-square-foot one-room shotgun house. This house was installed by five people in just five days.

What I love about the design is that it IS designed. It is anything but those nondescript rectangular trailer-boxes that FEMA used to warehouse displaced individuals. Notice the filigreed detailing of the classic front porch. All of those little cutouts were digitally planned into the manufacturing. Sass estimates that this house can be manufactured for $40,000 if part of a large-scale production. 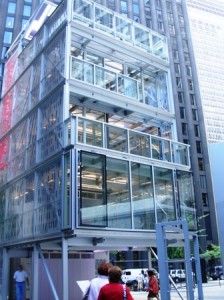 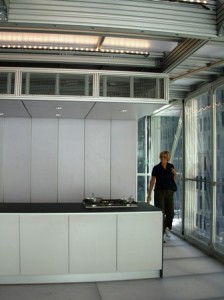 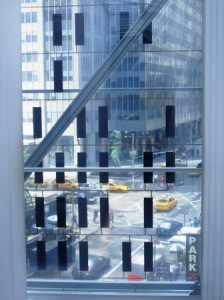 The Cellophane House, a four-story, single-family structure, can be adapted to different environments. Created by Stephen Kieran and James Timberlake of Philadelphia-based KieranTimberlake Associates, authors of Refabricating Architecture (2003), the Cellophane House has an an aluminum frame made from an off-the-shelf extruded material by Bosch Rexroth. Its parts are joined with reversible connections (bolts) rather than permanent ones (welds). All the wall, window, flooring, and infrastructural elements are attached to the “matrix” framework enabling each section to be disassembled and recycled (instead of wasted).

Note the photo at right: Each dark band is a photovoltaic cell, integrated into the thin film PET membrane and roof canopy. These cells gather energy during the day and channel it to a battery array in the mechanical room. Water is heated by a solar collector on the roof canopy. This building sustains itself by collecting and distributing essential energy, harnessed from the sun. 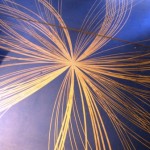 Since touring MoMA’s “Home Delivery” exhibit, I have been thinking about why I am so intrigued with prefabricated home design and construction systems. Clearly, innovative design is only one reason driving research and development of 21st century prefab dwellings. The most compelling and motivating forces are rooted in a desire to use materials and manufacturing processes in a sustainable way, while at the same time, respectfully housing (not warehousing) and sheltering human beings. Those are reasons worthy of our support and attention. [photo at left is a computer-generated design, scored into the blue plywood floor of Professor Sass’s New Orleans house]

I am eager to see how this prefab movement evolves. And to see whether any of the homes featured here are adopted for wider installation. That will be the true demonstration of their success.

Credits: “Home Delivery” was curated and organized by Barry Bergdoll, the Philip Johnson Chief Curator of Architecture and Design, and Peter Christiansen, Curatorial Assistant, at the Museum of Modern Art.

This entry was posted on Friday, August 15th, 2008 at 12:41 pm and is filed under Architecture, Creativity. You can follow any responses to this entry through the RSS 2.0 feed. You can leave a response, or trackback from your own site.

9 Responses to “Elegant, Stylish . . . and Prefabricated”