Thanks to a connection made by my Seattle-based PR whiz-friend Cindy Combs, I was invited to be a guest on “Living Today,” the daily afternoon show on Martha Stewart Living Radio. The segment originally aired on April 28th, the day before Stylish Sheds and Elegant Hideaways was published.

I had a delightful 25-minute conversation with gregarious host Mario Bosquez.  We discussed the ideas and inspiration for one of my very favorite subjects: Creating Your Dream Shed. 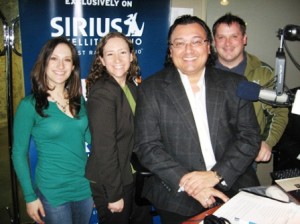 The interview was completely enjoyable, enhanced by Mario’s enthusiasm and constant affirmation, which gave the impression that talking about “elegant hideaways” was to him the most exciting topic on earth!

Obtaining an audio copy of the interview was nothing short of a miracle, however. It involved (a), signing up for a free 3-day subscription to Sirius Radio; (b) setting up my crappy little cassette recorder next to the computer so I could tape the show as it streamed live on the net; and (c) racing into the other room to do the interview by phone with Mario.

Once my segment of the show was finished, I returned to my office and rewound the recording of the interview. Not only was it kind of scratchy and there were all sorts of pinging sounds from my computer (probably some kind of AOL affectation that lets you know if a new message has arrived), I also discovered that the tape ran out before the interview was over. I begged my publisher to try and obtain a professional recording from some kind of media monitoring service, but that request went nowhere.

So, finally, thanks to my wonderful collaborator Bill Wright, who figured out how to convert a cassette recording into a digital file (and who, I’m sure, devoted many hours to clean up the poor quality sound captured by my amateurish recording), we have a reasonable facsimile of the interview. Thanks, too, to Bob Meador, aka the web guru, for further enhancing and editing the file, filtering out background noises where possible, and posting the audio to my web site.

Thanks to the support of my friends, I actually have the interview to share, albeit more than a month after it originally aired. Click here to listen: Debra on MSL Radio.

This entry was posted on Sunday, June 8th, 2008 at 12:04 pm and is filed under Book reviews, Creativity, Entertainment, Gardening, Playfulness, Writing. You can follow any responses to this entry through the RSS 2.0 feed. You can leave a response, or trackback from your own site.