There’s something magical about a plant that keeps growing even after you think it’s a goner. I love seeing new leaves sprout from my just-pruned apple tree branches (I used to stick both ends of the saplings into the soil around the perimeter of my vegetable beds to create low scalloped fencing each spring).

If harvested while its branches are bare, willow (Salix sp.) performs its magic, too. My textile background and my love for any material that can be woven like fabric, combined with my penchant for gardening, has drawn me to supple ingredients like willow. So it’s no surprise that I enjoyed building my own “willow goose” in 2002. 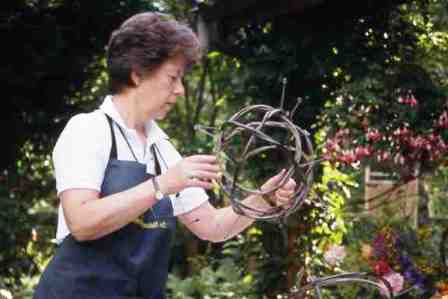 On a pleasant June evening, I was invited to join members of the Woodinville Garden Club to gather for a willow workshop in Carol Ager’s garden in Woodinville, Wash. This special class was led by two British willow-weavers, Pat Hutchinson and Jacky Barber. Known as “The Willow Weavers,” the duo’s artistic efforts in 2001 won them the coveted Gold Medal at the famed Chelsea Flower Show. The women were in town to teach at the annual Hardy Plant Study Weekend, hosted by the Northwest Perennial Alliance. It was a rare opportunity for about 20 Seattle area gardeners to play with willow, learning Jacky and Pat’s techniques for creating willow animals. Since I wasn’t a garden club member, I considered myself lucky to participate. 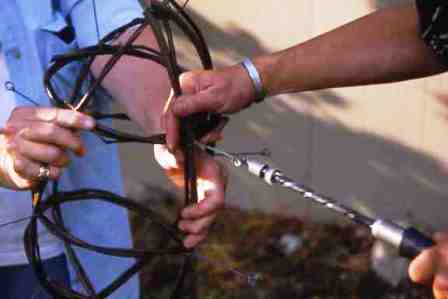 Using a “Twisler” tool to tie and secure bent willow

We used fresh willow twigs from Judy Zugish of Marysville’s Bouquet Banque nursery (which also operates a basketry school called FishSticks). Cut in the dormant season, the 5-foot and 7-foot lengths of Salix alba ‘Polish Purple’ branches were soaked in water for five days to make them workable. Jacky and Pat recommended wrapping the branches in damp cloths or plastic sheets to keep them moist while working with them (especially in hot weather).

As we worked in teams to create a larger-than-lifesized goose, heron or swan, the women showed us how to manipulate the willow branches and form animal shapes using tools and wire fasteners. The nifty trick is to use 4-6 inch “wire ties” with a loop at each end. The wire is used in the UK to seal sacks of potatoes and in the US for securing rebar. You can find them at home improvement centers. To join pieces of willow, we used a hand-held tool called the “Twisler” or “Twister.” It hooks into the two loops that have been wrapped around willow bundles. When the tool is pulled, it twists and secures the wire (this tool is available from Stanley Tools). The other useful willow-working tools include pruners for cutting and trimming branches, wire cutters for removing excess wire, string to hold willow sections in shape before they are wired, and measuring tape.

After making the various animal parts — head, neck, body and legs — we used more wire ties to connect them. Playful and perfect for the flowerbed, my completed willow goose stood around 5 feet tall. I stuck the twig “legs” a few inches into the soil and enjoyed watching how the garden began to grow in and around its body.

Inevitably, willow creations are short-lived. Subject to exposure, elemental extremes and the vagaries of time, there is a temporal nature to anything fabricated from twigs and stems. That’s why I was blown away when I saw Patrick Dougherty’s woven twig sculptures. 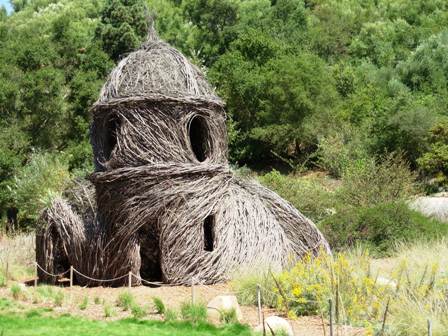 Resembling a whimsical, storybook abode (perhaps an ambitious version of the first Little Pig’s house of sticks?) the large-scale, temporary sculpture Dougherty created for Santa Barbara Botanic Garden in 2005 was a joy to behold. Named “Toad Hall,” it stood in a distant field, beckoning us to come. We were able to touch the twisted branches that formed walls more than 4-inches thick. We walked inside the rounded structures, peered out of the windows to notice the landscape beyond, gazed at the fanciful turret-shaped roof-line against the blue September sky. That I visited the garden and Toad Hall more than a year after Dougherty had created it was a testament to the durability of his creations. That the willow had begun to sprout leaves added a spontaneous twist to the installation. 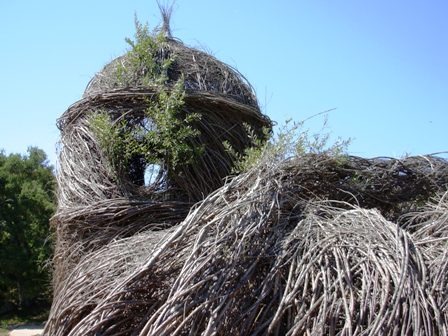 The building began to “grow” in place, long after the original branches were cut from willow trees

Patrick Dougherty is based in Chapel Hill, North Carolina, but he has a worldwide reputation for creating on-site twig sculptures. Commissions have taken him to Japan, England, Denmark, and countless American cities. Some of his projects look like pieces of tornado-blown tumbleweed, slightly askew, slightly tilted as if they survived the “big one.” Others take advantage of permanent architecture, climbing up the face of a building or weaving in and out of columns. In a book titled “Where there’s a Willow, there’s a Way,” which I picked up at the Santa Barbara Botanic Garden, there are construction process photographs depicting two-story high scaffolding on which he must stand to work at this scale. 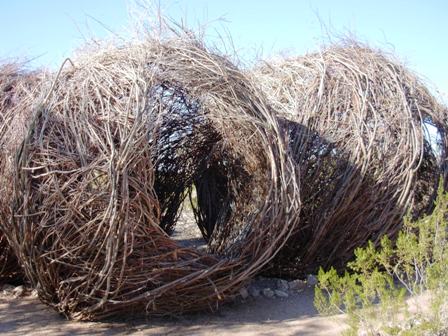 Just before Christmas I had an unexpected surprise when I stopped by the Desert Botanical Garden in Phoenix. I was on a two-day visit to see my folks and sneaked away for a sunny Sunday afternoon visit to the garden, a favorite place of mine. As I walked the loop through the grounds, I could see a willow creation emerge at the edge of my periphery. WOW! Of course, it was another Patrick Dougherty installation, created last year. Called “Childhood Dreams,” the playful project is a series of interconnecting spherical rooms.

You can see a slide show of the 17-day design and installation process featuring Patrick Dougherty on the garden’s web site. It was fascinating to learn that the design was inspired by the rounded forms of golden barrel cactus that grow throughout the botanical garden. Circular “windows” in the rooms are aligned to capture important desert views. 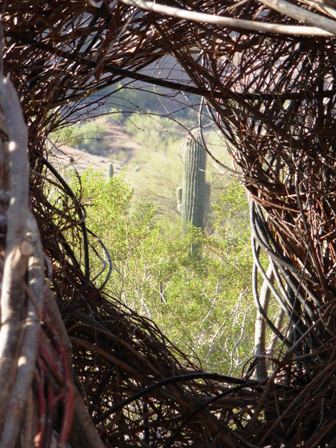 One curator had this to say about Dougherty’s willow sculptures:

“Dougherty’s works allude to nests, cocoons, hives, and lairs built by animals, as well as the man-made forms of huts, haystacks, and baskets, created by interweaving branches and twigs together. Many of his works look ‘found’ rather than made, as if they were created by the natural force of a tornado sweeping across the landscape. He intentionally tries for this effortless effect, as if his creations just fell or grew up naturally in their settings.”

It’s so easy to be drawn into a Patrick Dougherty sculpture because it is, in so many ways, a living, organic expression. Quite humbling, in fact, to see how something so simple, so ordinary (otherwise destined for the compost heap) can be reinterpreted as architecture.

This entry was posted on Friday, January 4th, 2008 at 6:15 pm and is filed under Creativity, Gardening, Playfulness, Shed Glossary. You can follow any responses to this entry through the RSS 2.0 feed. You can leave a response, or trackback from your own site.