March 20th is a magical day for me – the Spring Equinox and the day of my son Alexander’s birth. Today he turns eleven! Like me, he is a Pices, arriving at the last possible moment of this sign. 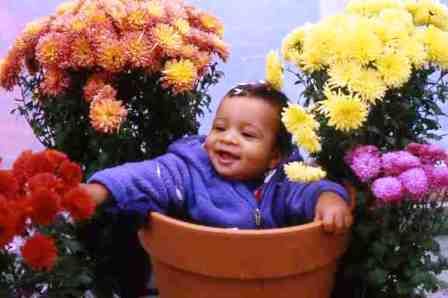 My friend Scott Eklund, now a photographer for the Seattle Post-Intelligencer, took this “flower baby” portrait of Alex in the fall of 1997 when we were shooting a holiday brochure at Emery’s Garden

I take pleasure in the fact that my first child was born on the Summer Soltice and my second child was born on the day when spring arrives (today!). It feels symbolic and life-affirming in so many ways, especially for a mother whose creative expression occurs in and around the garden. My sons, so special and yet very different from one another, are growing up. Oh, for a time-lapsed movie of their young journey to date. In my memory, my mind’s eye, I can actually see them growing: their legs and arms lengthening; their shoulders broadening. In the stories my husband and I retell one another, we roll back the tape and hit the pause button to watch it over and over again. Remember when….?

A little piece I wrote for the Los Angeles Times appears today under the banner: Breathing Room.

Here is my essay in its entirety. The Times had to cut it for space, which is fine. I like it both ways. Read the published version by clicking here: Branching In. 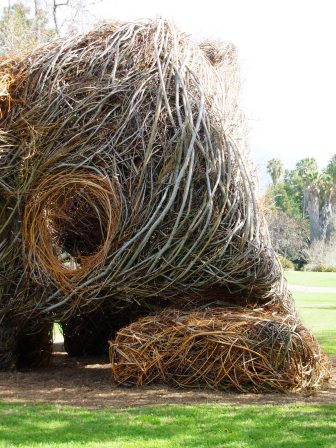 Aptly named ‘Catawampus’ by creator Patrick Dougherty, it is slightly askew, beckoning me to draw near.

Taller than a house, the installation is situated away from the main path at the Los Angeles County Arboretum & Botanic Garden. I approach, noticing how sunlight slips between open spaces formed by the warp and weft of twigs. The tactile quality of each thread-like branch appeals to me: the in-and-out, the over-and-under. I run my hand along the twisted surface, marveling at the density of four-inch-thick walls. My fingers stroke pussy willow-like tips, velvet against the rough twig bark. The structure looks spontaneously woven, as if beavers gathered the arboretum’s fallen branches after a windstorm and built themselves a fanciful dam.

Like a sophisticated student of art, I try to mentally deconstruct the organic sculpture. Is it a modernist bird’s nest? Is it a commentary on the fragile balance between nature and architecture? Or is pure folly, meant only to delight the eye?

The tilted branch-blocks rest on ottoman-like cushions of willow. I enter and move from one interconnected space to the next. Peering out of the window openings, I glimpse a maple tree, its new green leaves about to unfurl. Through another portal in the gray-and-brown twig wall I see an early-blooming magnolia. A “skylight” at the top brightens the dark interior with spring’s pure blue sky.

It’s easy to be lured into Dougherty’s rooms, made from saplings grown by the Willow Farm in Pescadaro. Even though the primitive chambers are penetrated by air, light and sound, they feel safe and separate. Time stands still, at least for a few moments.

Solid-looking, yet impermanent. In the end, it is simply a series of large forms, fashioned from ordinary willow otherwise destined for the compost heap. But it gives me quiet comfort.

This entry was posted on Thursday, March 20th, 2008 at 10:35 am and is filed under Architecture, Creativity, Playfulness, Shed Glossary, Spiritual Practices. You can follow any responses to this entry through the RSS 2.0 feed. You can leave a response, or trackback from your own site.