A true blue garden with a heart of gold 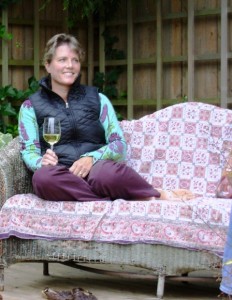 Tina sure knows how to enjoy herself in the garden! Here she is, resting on my vintage wicker in my former Seattle garden, 2006. 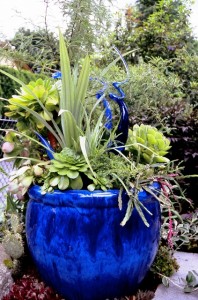 I first met Tina Dixon in the early 2000’s when I was asked to join her as a judge for the Washington State Nursery & Landscape Association design awards.

Her bubbly personality and welcoming nature included me in the circle of other judges, most of whom had previously served together. Our judging session took place at her home in Bothell, just north of Seattle, allowing me to gain a better sense of just who Tina is. In short, Tina is a connector. She connects colleagues, clients and friends, helping everyone feel part of the Seattle horticultural community. You can’t help but have fun when she’s in the room (or on the tour bus or in the garden).

Through Plants a la Cart, her container design business, Tina creates breathtakingly gorgeous planted pots for some of the Seattle area’s poshest addresses.

Several years ago, she turned her attention to the property she owns with her husband Paul Stredwick. Their hand-crafted garden is a vibrant, color-infused, texture-layered, art-filled spot on the map. And garden tour-goers, if they are lucky, can occasionally get beyond the denim blue-stained gate to see the surprising horticultural world inside.

The photographs shared here are ones I took in 2006 when Tina and Paul opened their Golden Trowel Award-winning garden to the Hardy Plant Study Weekend participants. I served on the event’s planning committee that year, so I knew what a treat was in store for the several hundred participants who flocked there during the Open Garden schedule. 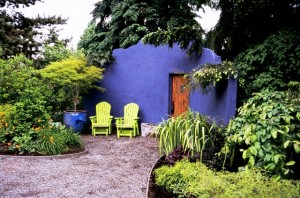 Since then, I know that Tina and Paul have received numerous requests to add their garden to area tours. They recently decided to open the property to benefit a cause that they personally support, Hopelink. Hopelink is an United Way agency that offers an array of programs that enable families in crisis to make progress toward and achieve self-sufficiency.

You can see the garden next Sunday, August 15th, at two different events. An evening Garden Party (6-8 p.m.) includes wine, hors d’oeuvres and music by The Chromatics. Knowledgeable docents will be on hand to answer questions during the festivities. Tickets to the private garden gala are $150 with a portion tax-deductible. Register online or call 425-897-3703.

The Dixon-Stredwick garden is also open earlier in the day, Noon-5 p.m. for a $50 donation to Hopelink. You can pre-order tickets for the tour here. Or call the number above.

For some background on this garden, here is the story I wrote in April 2007, which appeared in Seattle Homes & Lifestyles magazine. Subsequently, their garden has been featured by other publications, so I feel pleased that Tina said “yes” to me first! 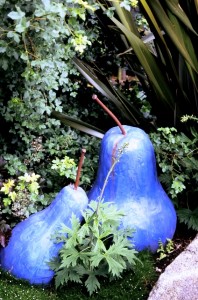 If, as color theorists say, blue has therapeutic qualities, then Tina Dixon is a very healthy woman. Whether it’s a bright or subdued blue, Tina thrives on the hue.

Owner of Plants a la Cart, a successful container-garden design service, Tina considers the serene hue her signature color. Although she doesn’t limit clients to her preferred palette, Tina is well known for filling azure- and cobalt-glazed urns with dazzling combinations of leaf shapes, textures and colors.

Her penchant for blue infuses her own landscape, giving it a cohesive theme. “Blue is my favorite color,” she proclaims.

When they bought a one-third-acre Bothell pasture in 1983 (previously inhabited by a lone calf), Tina and her husband, Paul Stredwick, were in their late 20s and intent on building their first home, a gray, barn-shaped Dutch colonial, trimmed in blue. Landscaping was not on their minds or in their budget.

By 1987, Tina abandoned an office job for a horticultural career. She studied landscape design at Lake Washington Technical College and launched Plants a la Cart. The pasture was by then home to two rambunctious golden retrievers.

Occasionally, Tina and Paul had time to tackle their own backyard. They renovated a deck and planted an 80-foot-long mixed perennial border against the south fence. “Paul and I were trying to pick away at the landscape,” she recalls. “Wherever we stopped one year, we started there the next. It wasn’t quite flowing.” 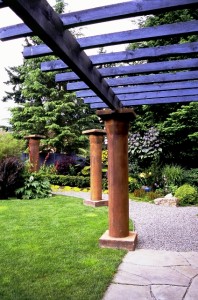 The blue-stained arbor is supported by DIY columns.

In 2002, knowing they wanted lighting, irrigation and hardscaping in the garden, Tina and Paul agreed to ask a landscape designer for an overall plan.

It was almost inevitable that Mike Jeppesen of Sammamish Landscape would help the couple create their blue-themed dream garden, since he and Tina had collaborated earlier that year on a gold-medal “Blue Garden” for the Northwest Flower & Garden Show. With a blue-stained gate and arbor, Pennsylvania bluestone pavers, blue Asian pots and collections of blue-tinged conifers, the designers made a rare statement with this cool palette. The design also earned them the Pacific Horticulture Award.

“Like Tina, I prefer to deal with foliage—this garden is virtually a tapestry of texture and leaf color,” Jeppesen says. “I also knew that even though Tina and Paul and the dogs needed to enjoy the garden, it also had to be a space for her to show off what she does best—it’s a garden that people will visit.”

Tina and Paul’s garden invites visitors to enter along a charming walkway, pass through an oversize blue gate and pause at a dramatic “foyer” where one of eight ochre-stained concrete columns appears as a focal point.

From here, a 4-foot-wide strolling path meanders clockwise around the garden’s perimeter. An irregular section of lawn is reserved at the center for playing ball with the dogs. More free-standing columns punctuate the heavily planted borders, drawing the eye through the landscape to a four-column pergola in the distance. 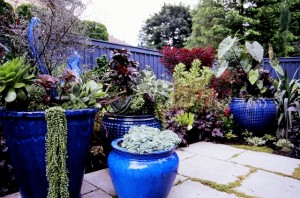 “Columns were on my wish list but were killing the budget,” Tina admits. Jeppesen suggested using concrete waste-water pipes, set on end, to serve as columns. At $80 each, the 8-foot-long pipes were a perfect solution. Tina asked artist Johnny Ward to transform the ordinary concrete with a rich gold-brown patina. Blue-stained lattice boards and rafters form the pergola, complementing a Pennsylvania bluestone terrace beneath.

To give the landscape the feeling of maturity, Jeppesen and his crew placed boulders, large rocks and stone steps throughout the landscape. He also encouraged Tina and Paul to incorporate large trees and shrubs into the design. “Even though Tina deals more with perennial-style plants, I wanted her to use trees and shrubs to provide interest when there are no flowers in bloom,” he says. “They give substance to this landscape.” 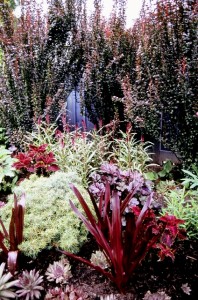 One-color gardens are appealing because of their simplicity, allowing plants and constructed elements to speak a common design language. Tina recognized that gold, lime, wine and silver foliage plants gain a visual boost when placed near blue pots and architecture.

She adapted container design techniques when planting the landscape. “Because I work on such a small scale, it was an overwhelming thought at first,” she says, “but you just have to take the principles of putting the right leaf shapes and textures together and use them in the larger context.”

Blue-glazed Vietnamese pots hold everything from gold-leafed ornamental trees and striped tropical plants to exuberant vines and silvery succulents. Tina’s adventurous designs rely on attention-grabbing plants that look even better when paired with blue. “I’ve been really tempted to use other container colors,” she says. “But that would feel like a mixed jar of jelly beans. Instead, I decided to be bold and consistent. The blue pots make sense and tell a story.”

More photos to delight – and tempt you to attend next Sunday’s tour and garden party: 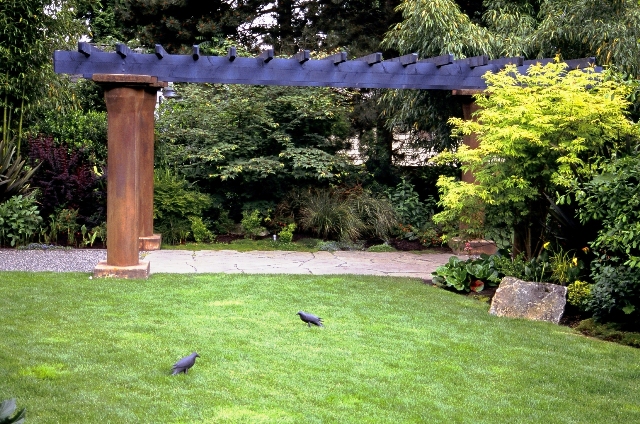 There is a small patch of dog-friendly lawn in this garden, yet Tina can't resist placing sculptural black crows on its surface. 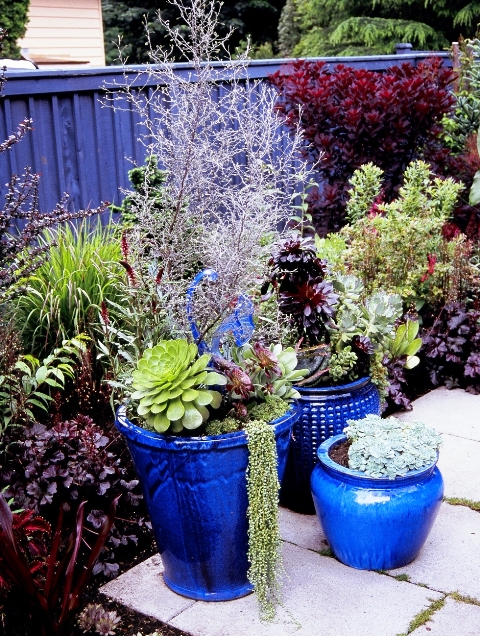 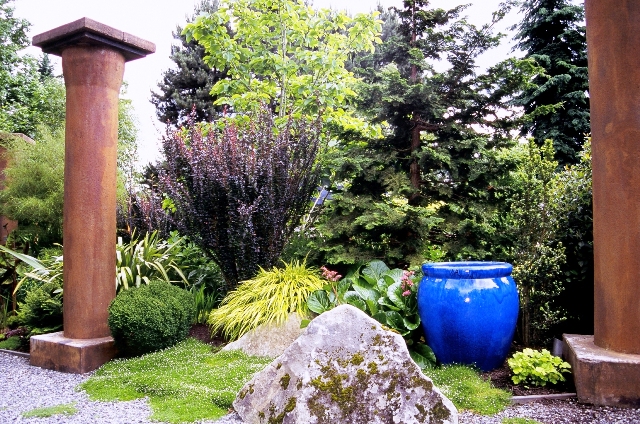 A brilliant, blue-glazed urn is a delightful counterpoint to trees, shrubs and rock. 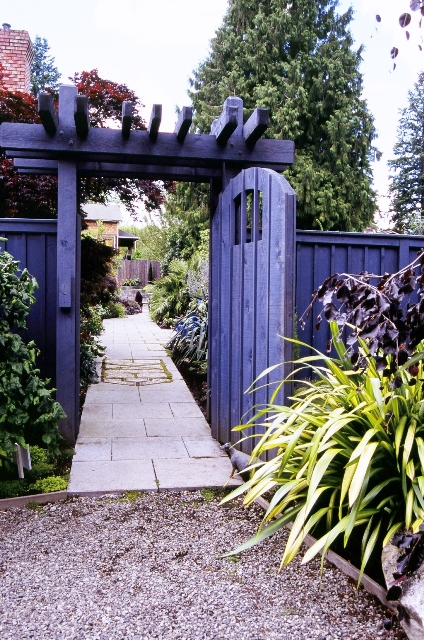 Playful “hopscotch” pavers guide visitors to the blue-stained entry gate (a hand-painted sign nearby reads “All who enter must hop” and another, inside the garden, asks “Did you hop?”). 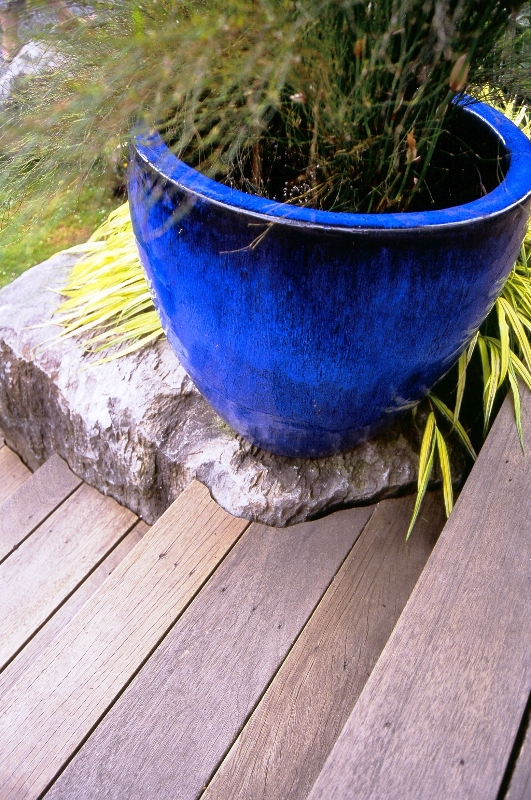 Here's a cool detail showing how Tina and her landscape cohort Mike Jeppesen carved the decking around a piece of basalt - just like a puzzle piece. 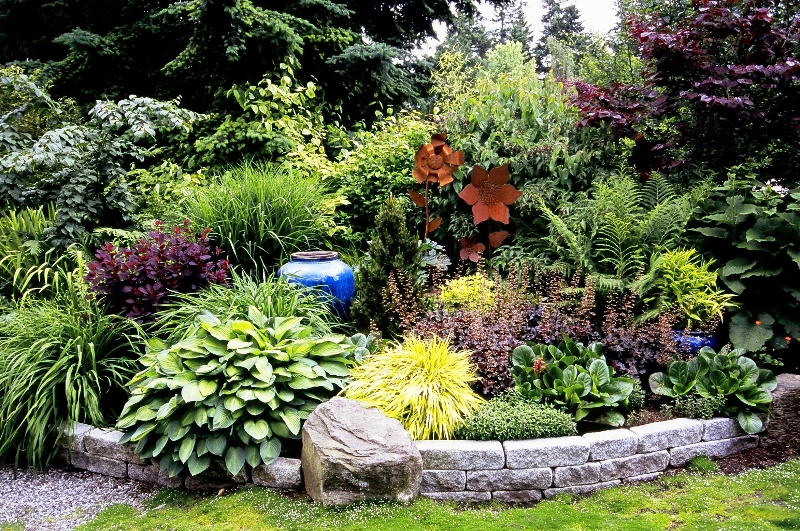 Not much to say but: "Feast your eyes on this tapestry of texture and color"