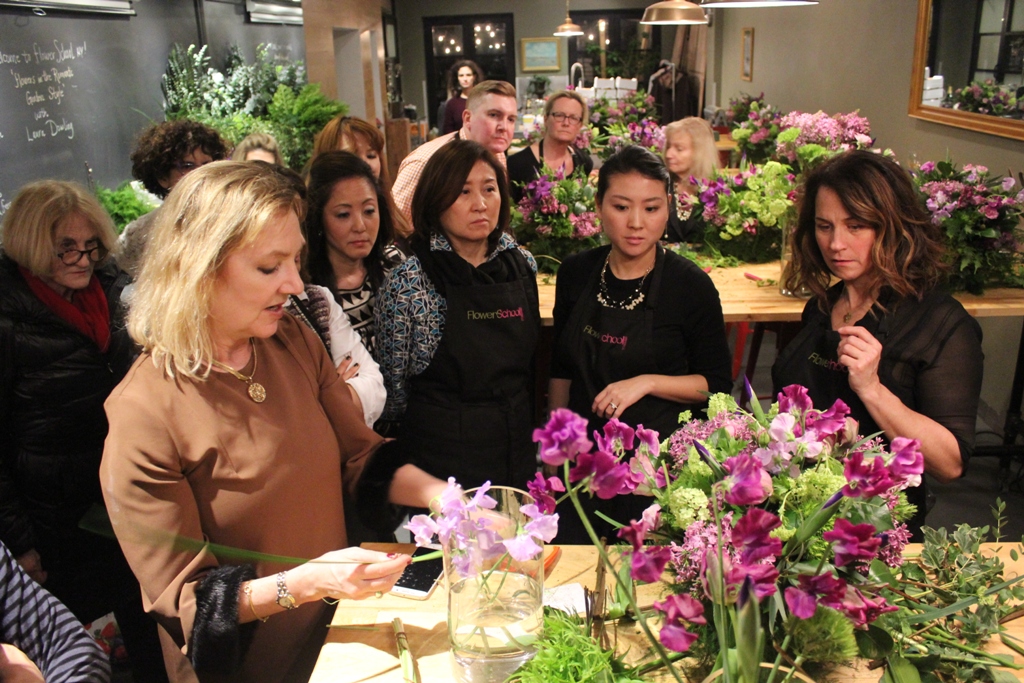 Students at FlowerSchool New York were inspired by the chance to work directly with Laura Dowling at an early February 2016 workshop.

I’ve been eager to meet Laura Dowling ever since I first read about her appointment as White House Florist in 2009. I remember being so enthralled with the New York Times story about Laura’s choices for decorating her first State Dinner (it was the Obama’s first State Dinner, too), for India’s Prime Minister in November of that year.

Here’s an excerpt of that report:

” . . . at their first state dinner on Tuesday night, President Obama and his wife, Michelle, made sure to infuse the glittering gala with distinctive touches.

Of course, I seized on the language: “locally grown, sustainably harvested,” and ever since I’ve watched closely for signs of Ms. Dowling’s preferences toward the flowers grown near her in Virginia, Maryland, New Jersey, Pennsylvania, and those that may be further away but still from domestic U.S. Farms. 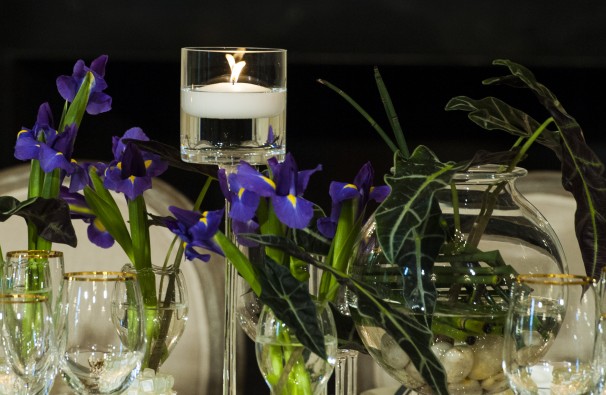 The Slow Flowers Movement enjoyed a subsequent “win” for the cause in February 2014, when the State Dinner for French President Francois Holland yielded the White House’s most public acknowlegement to date about using all-American blooms. There was so much enthusiasm for that public support of American grown flowers that when USDA Deputy Secretary Krysta Harden blogged about the news, it generated more than 150 comments.

After a heady, six-year run as the current administration’s Chief Florist, Laura Dowling has returned to civilian life — and that’s good news for the floral design community and American flower farmers alike. 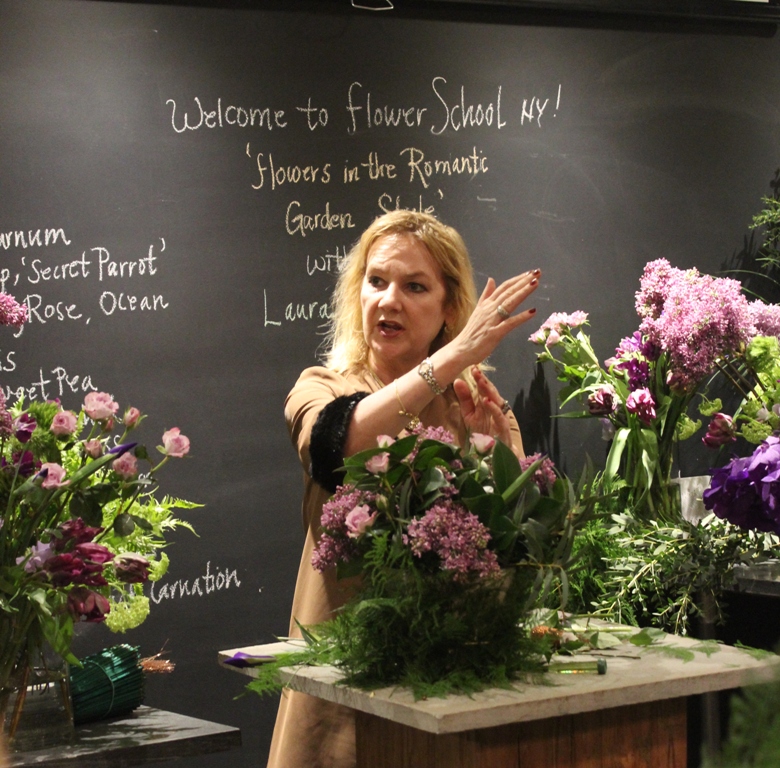 ​In her position as Chief Florist, Laura Dowling planned and implemented decorations for major events at the White House, including the White House Christmas, state dinners, the presidential family quarters, the public tour route displays, and Camp David.

Now, Laura is focusing her work on “Floral Diplomacy” on both the global and local stage. Her Alexandria, Virginia, studio, Interieurs et Fleurs, is a hub of major commissions, several upcoming book projects, and floral styling for photo shoots and more. Her world seems to no longer be dominated by carefully-worded statements and all sorts of other persons’ political agendas, so I think we’ll all have a chance to get to know this lovely, gifted and generous floral artist, educator and yes, floral diplomat.

And guess what? I did just that last week, when I was able to attend a fabulous 2-hour workshop at FlowerSchool New York, which hosted one of Ms. Dowling’s first major industry appearances since she left her former position in March 2015. 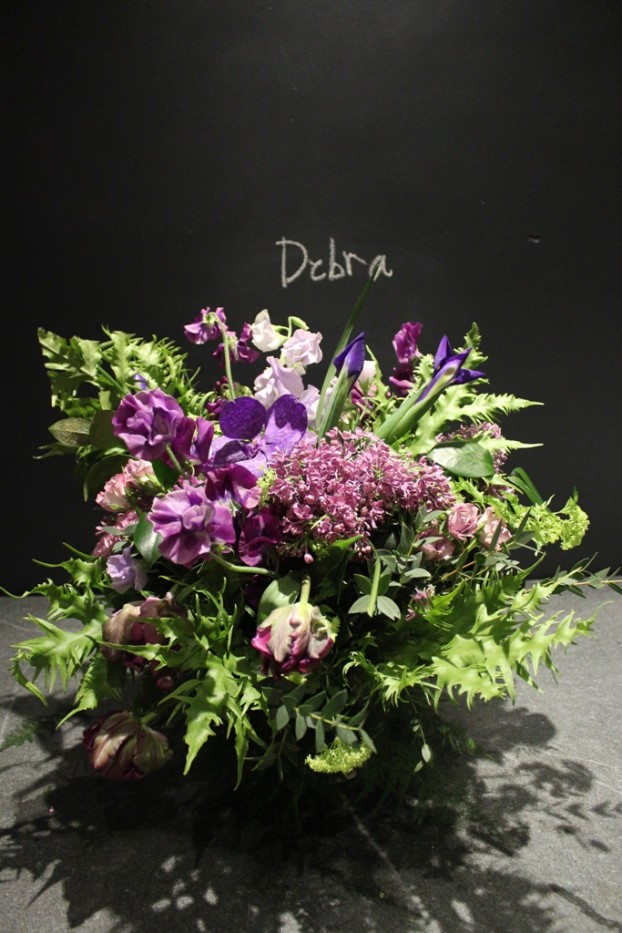 My finished project, inspired by Laura Dowling’s vision called “Apres la Pluie,” or after the rain.

Everything about the workshop was perfect. For one thing, that’s simply how they do it at FlowerSchool New York.

Under the leadership of founder Eileen Johnson and executive director Calver Crary, the FSNY is a delightful destination. There are comfortable work tables with all the tools and supplies you’ll need. Eileen and her staff serve delicious tea in bone china, with elegant cookies.

And at the evening’s conclusion, we each received a festive glass of champagne and a chance to photograph our designs before packing them up in carriers to head out to the taxi, subway or who knows where? It works just fine; believe me, I’ve traveled comfortably by air and train with my FlowerSchool New York creations.

Even though I don’t live in NYC, I’ve now been able to take two workshops there. I urge you to check the FlowerSchool New York web site of upcoming classes ~ if you’re headed to NYC for any reason.

You may be fortunate enough to study with some of the top designers in the world. That happened when I managed to grab a space in an Emily Thompson workshop in October 2014, which I wrote about here. And of course, getting to meet and learn from Laura Dowling was a bucket list achievement. 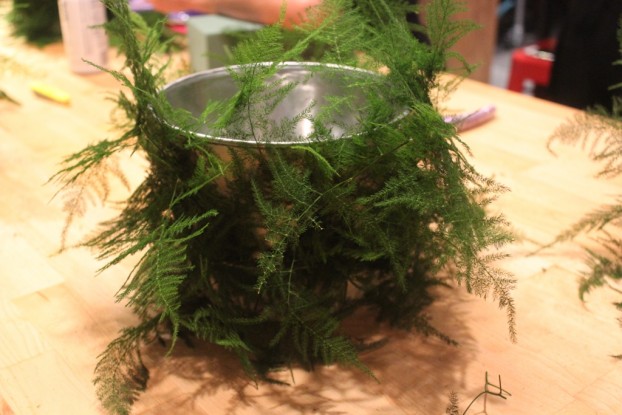 We began by using fern foliage to create a soft, woodland exterior for our vessel. And yes, the fronds were tucked under a simple rubber band (later we hid the rubber bands with a wrap of variegated ivy vines!)

Laura provided an intimate group of students hands-on instruction for creating a lush and layered bouquet in the contemporary garden style as well as design tips to create our complementary organic container for the display.

Here are some of her design lessons that I brought home with me: 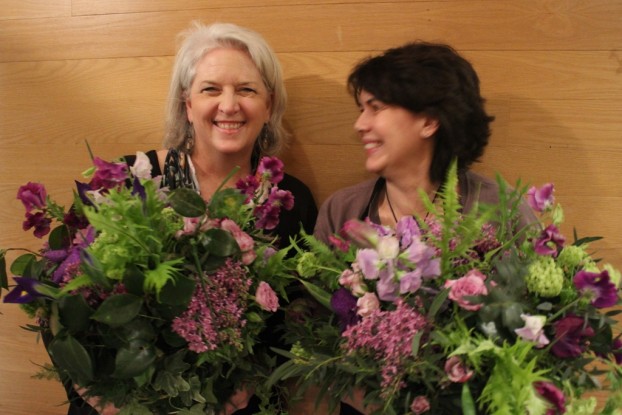 With my friend Gloria Battista Collins of GBC Style, we posed happily with our finished arrangements.

I told Cal and Eileen that I would share details about FSNY’s upcoming Study Abroad program to Holland. The fifth annual Holland Study Tour takes place April 24-May 1, 2016. Here are the details. 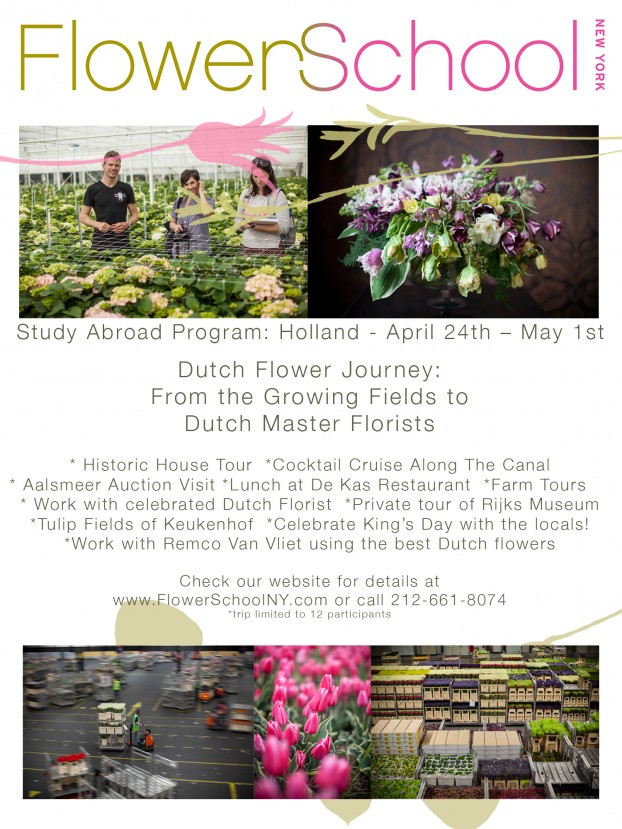 The price starts at $3,500, which is a good value for people looking to travel with like-minded flower lovers.  I’m envious if you choose to attend!

This entry was posted on Saturday, February 13th, 2016 at 6:49 pm and is filed under American Grown, Blog Posts, Creativity, floral design, General. You can follow any responses to this entry through the RSS 2.0 feed. You can leave a response, or trackback from your own site.