Note: This article originally appeared in the online edition of The Oregonian, October 17, 2013. Click here to read the online version where you can comment and Tweet the link. I want to acknowledge up front that the Field-to-Vase Dinner concept and format began in June 2013 at the Monterey Bay Greenhouse Growers Dinner, created by my friend Kathleen Williford of the California Cut Flower Commission. The Portland event earlier this month was based on her model and she was there in spirit! Follow Kathleen at @kathinated. 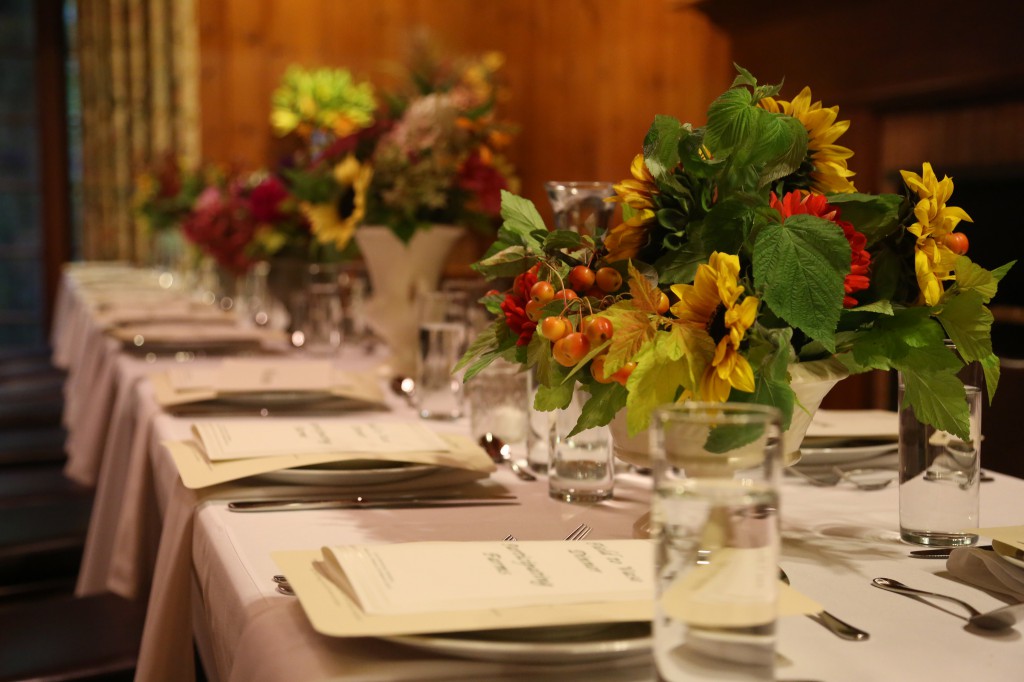 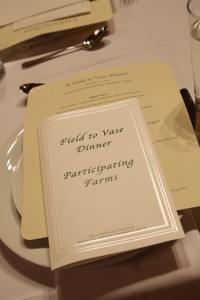 A coalition of California cut flower farmers recently arrived in Portland, extending their hands of friendship to the local floral industry. They weren’t exactly holding olive branches, although those botanical elements would likely be found in a vase of California-grown blooms.

No, the reason was self-preservation, not just for the seven California farms in attendance, but for their counterparts in Oregon and Washington.

Their Field-to-Vase gathering took place on Oct. 8 at Leach Botanical Garden in southeast Portland, where a local caterer served a decidedly local menu to about 40 flower farmers, floral retailers and wholesalers, and designers.

Part flower summit, part floral showcase, the event brought together people who might otherwise view themselves as competitors.
Collaboration is the best way to save American cut flower farms, maintained Lane DeVries of The Sun Valley Group based in Arcata, Calif., the largest cut flower farm in the United States. 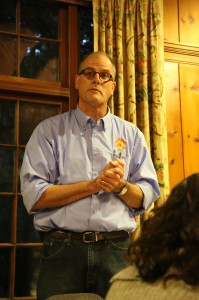 DeVries is also the current chairman of the California Cut Flower Commission, the organization that hosted the event.

U.S. flower farms once produced nearly 65 percent of the nation’s cut flowers, but over the past two decades, imports from South America have caused that figure to shrink to around 20 percent, DeVries said.

“We’ve actually seen cut flower operations go out of business in a lot of states,” he said. “The reason we are reaching out to (Northwest) flower farms is to work together as an American-grown domestic flower movement.”

Flower farming cooperatives are well established in the Northwest, dating to 1942 when the Oregon Flower Growers Association was founded. The wholesale farmer-to-florist market operates from a warehouse in Portland’s Swan Island industrial district with about 30 vendors. 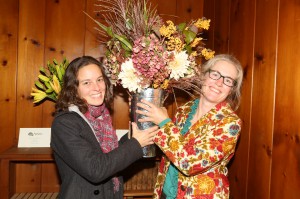 According to Diane Szukovathy, a Mount Vernon, Wash.-based farmer and the Seattle growers’ market president, the emerging market’s locally grown efforts gained momentum last fall when it received $138,000 in USDA Specialty Crop Block Grant funds, administered in partnership with the Washington State Department of Agriculture and the Oregon Department of Agriculture.

“The grant money helps us open more distribution channels for local farms to sell their flowers,” Szukovathy said. “Together, we can all shed light on major shifts in how people buy flowers.”

A wide variety of Northwest-grown flowers and foliage is found in the floral departments of New Seasons Markets. 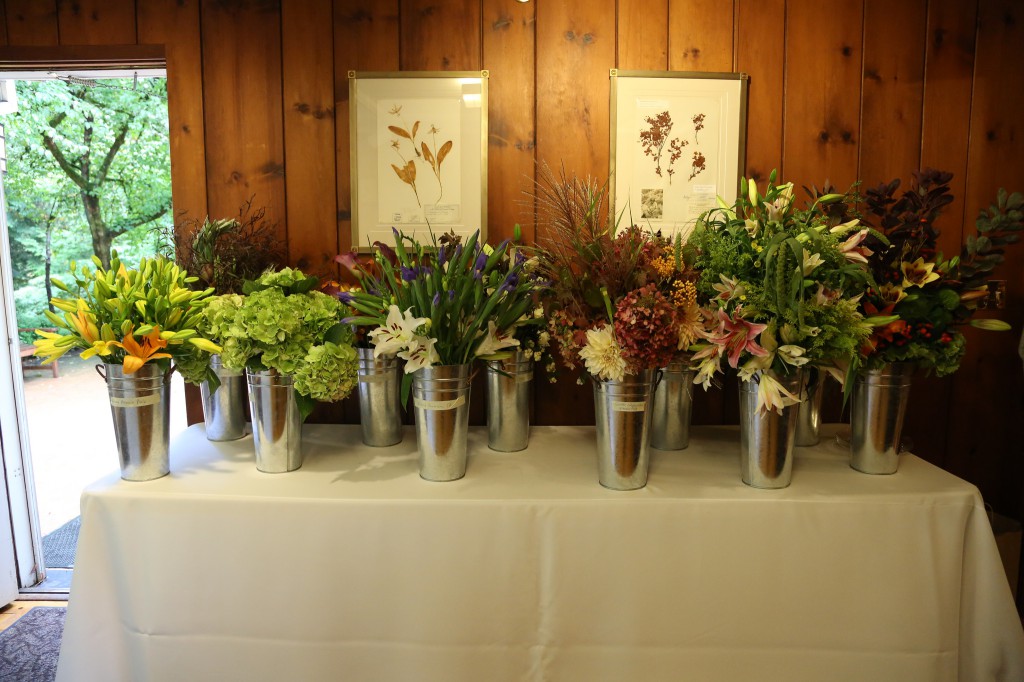 These Farm Bouquets represent the participating flower farms from California, Oregon and Washington – a veritable bounty of botanical excess!

Katie McConahay, the chain store’s floral merchandiser, said she’s starting to expand her definition of what is local and seasonal to include California-grown flowers, especially during the winter months when production on Northwest flower farms is lower.

“When I buy for our stores, my focus is definitely on Oregon- and Washington-grown flowers,” McConahay said. “For many of our customers, California was not considered ‘local,’ but in order to sustain an American-grown floral product consistently throughout the year, California is a good year-round option for us.”

She hopes better product information and education at stores will help consumers see that domestic flowers, even from one state away, offer an alternative to imported ones. 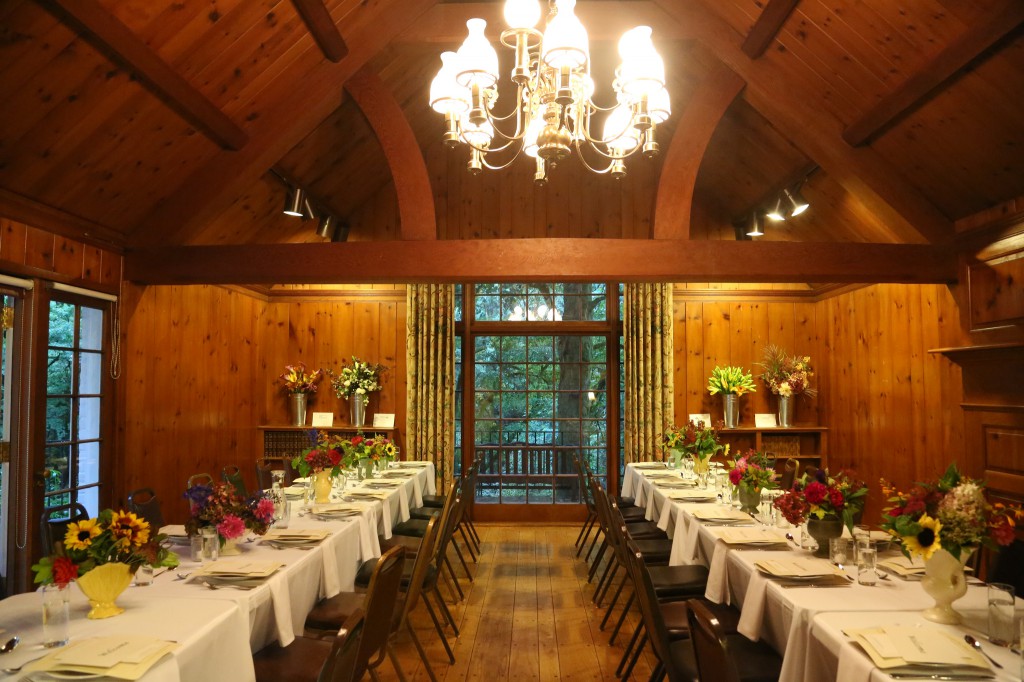 The gathering was held in a quintessential Northwest venue: Portland’s Leach Botanic Garden. 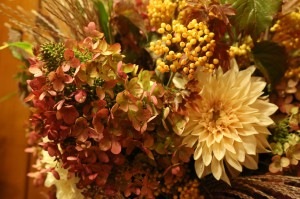 Seasonal, local and sustainable flowers – beautiful and of the moment.

For Christopher Papst, a manager-buyer with Greenleaf Wholesale Florist, based at the Portland Flower Market, bringing California flowers to the Northwest is a logical next step after sourcing locally, especially in the off-season when production is limited on Oregon and Washington flower farms.

“For one thing, the transportation costs are better,” he explained. “Ninety percent of imported flowers come through Miami, followed by three to four days on a truck. Even under ideal conditions, it’s still four days. For the freshness factor alone, I want California flowers.”

Increasingly, florists are coming to Greenleaf with specific requests for local and seasonal flowers, Papst added. “I just had a florist asking where our flowers originated from because she had a customer insisting on local flowers.” 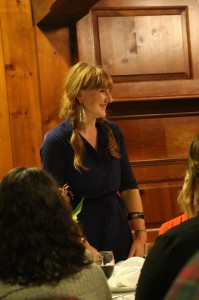 Elizabeth Artis of Espe Floral + Foliage, a Portland designer with a commitment to local and seasonal flowers.

Elizabeth Artis, owner of Espe Floral + Foliage, a flower shop inside the Food Front Cooperative Grocery in northwest Portland, was encouraged by the connections she made at the gathering. Her studio’s tagline is “local, seasonal, sustainable, lovely,” a sentiment that resonates with her eco-minded customers.

“I’ve always considered California ‘local,’ and now I have a new vocabulary to communicate that idea to my clients,” she said. “As winter is coming, having flowers from California – just across the border – will give me more options.”

Debra Prinzing is a Seattle-based design writer, author of “The 50 Mile Bouquet” and “Slow Flowers: Four Seasons of Locally Grown Bouquets from the Garden, Meadow and Farm” and creator of Slow Flowers, a new, free online directory to help consumers find florists who use American-grown flowers. More photographs from this very special event (all photos (c) Linda Blue, courtesy of the California Cut Flower Commission) 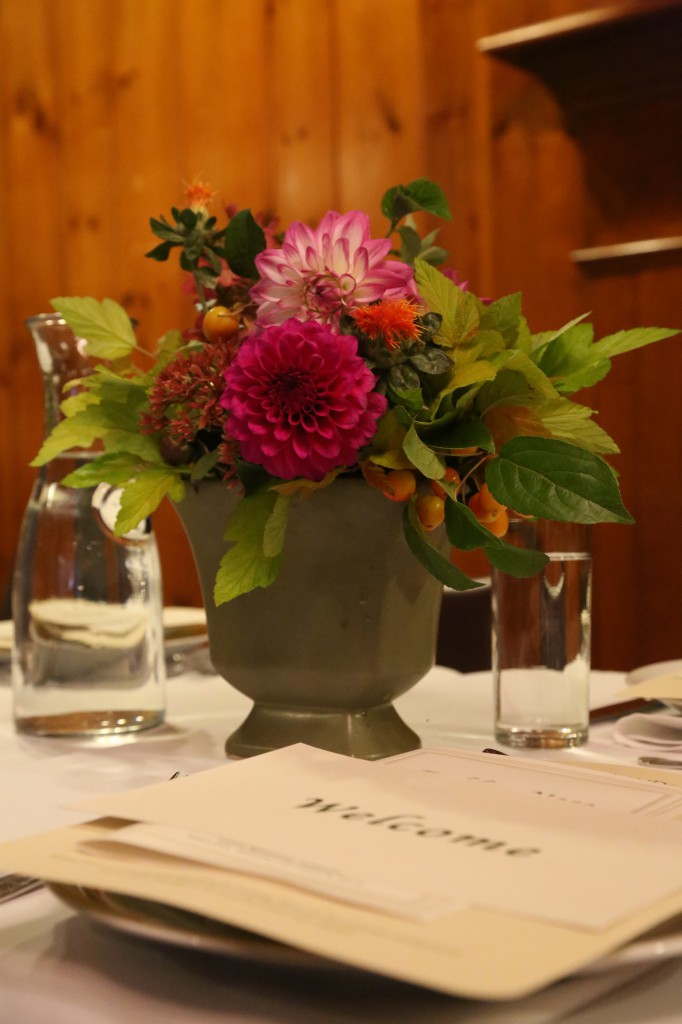 My wonderful friend Lorene Edwards Forkner, editor of Pacific Horticulture Magazine, helped me make all of the floral arrangements for the evening’s decor. We used my vintage American pottery collection for the centerpieces. 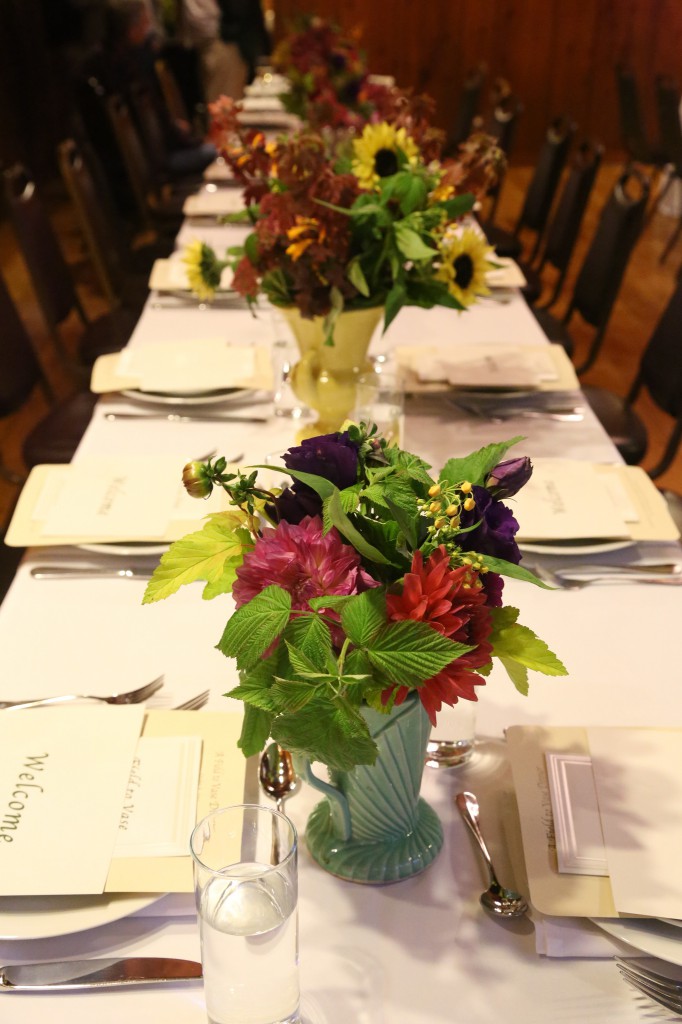 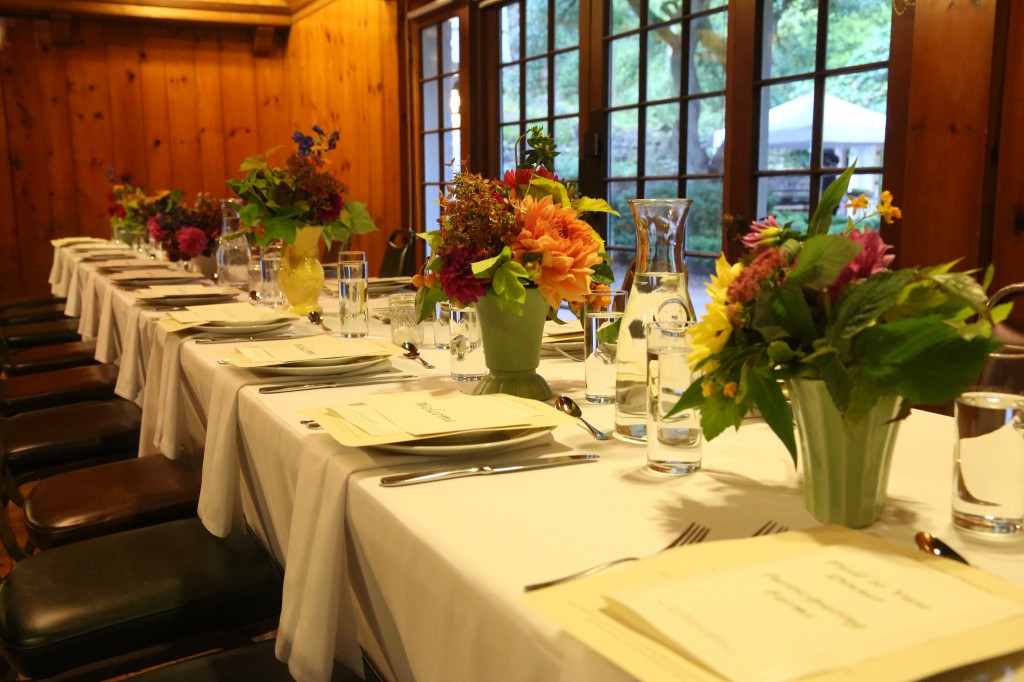 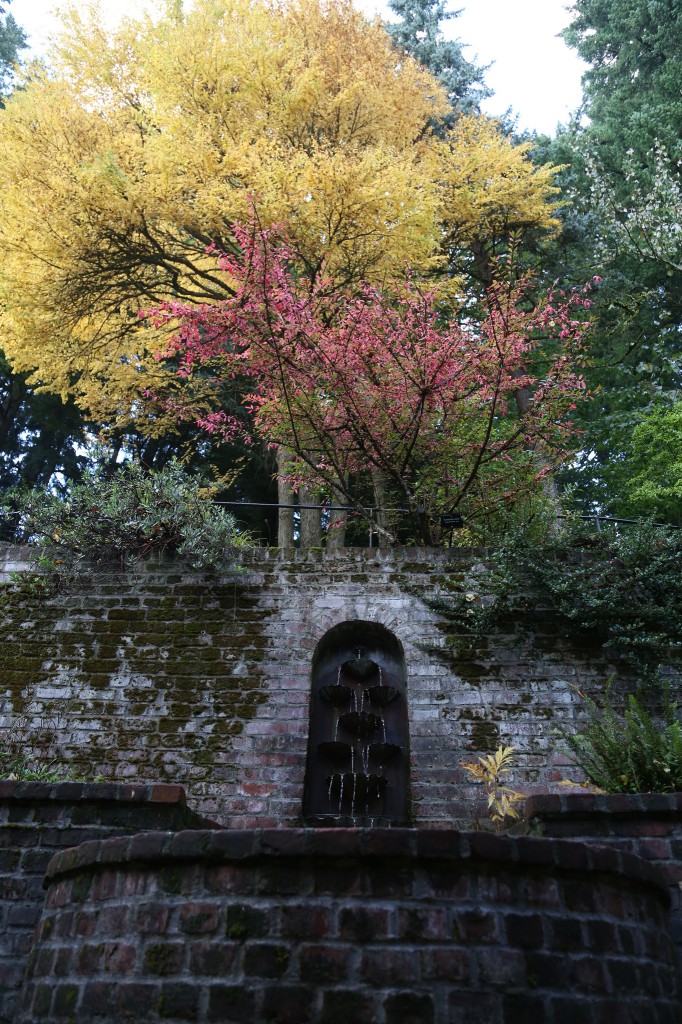 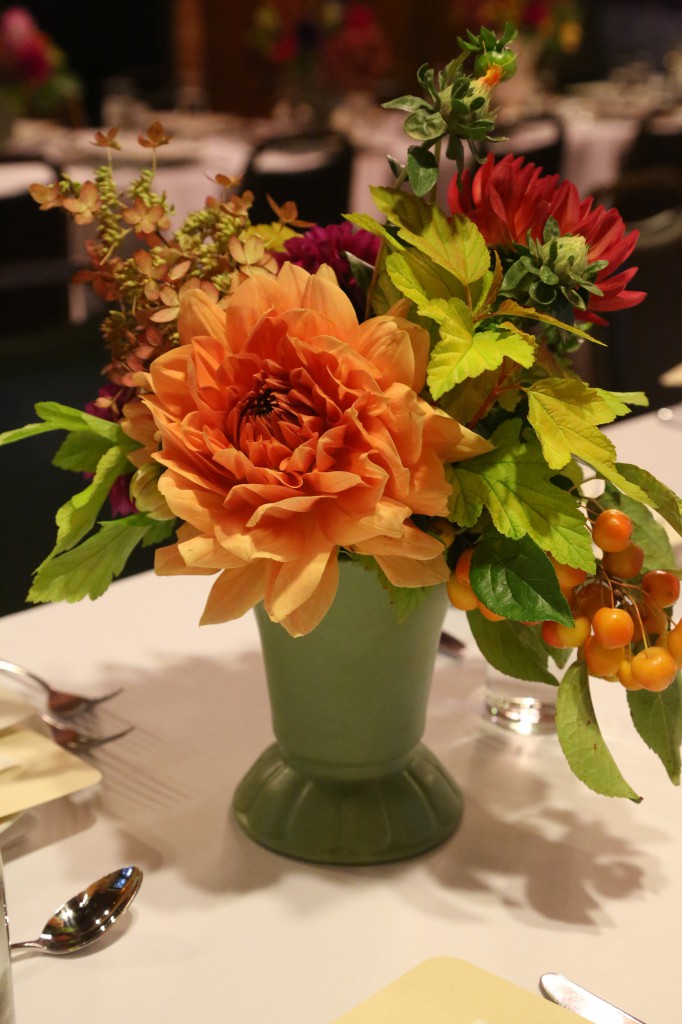 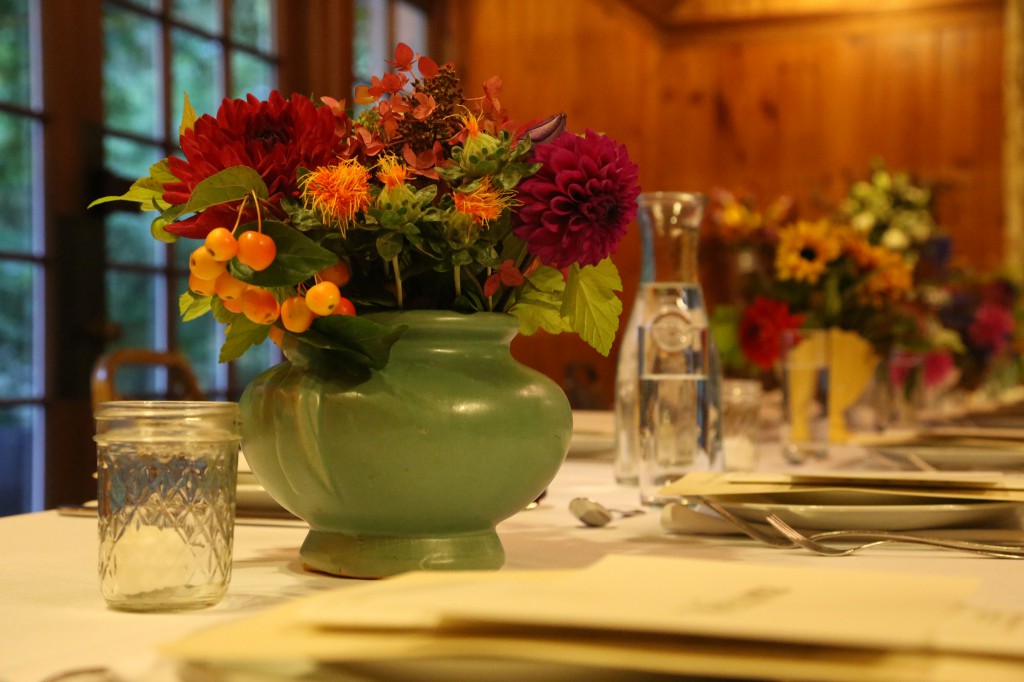 I have a thing about green pottery glazes, don’t I? 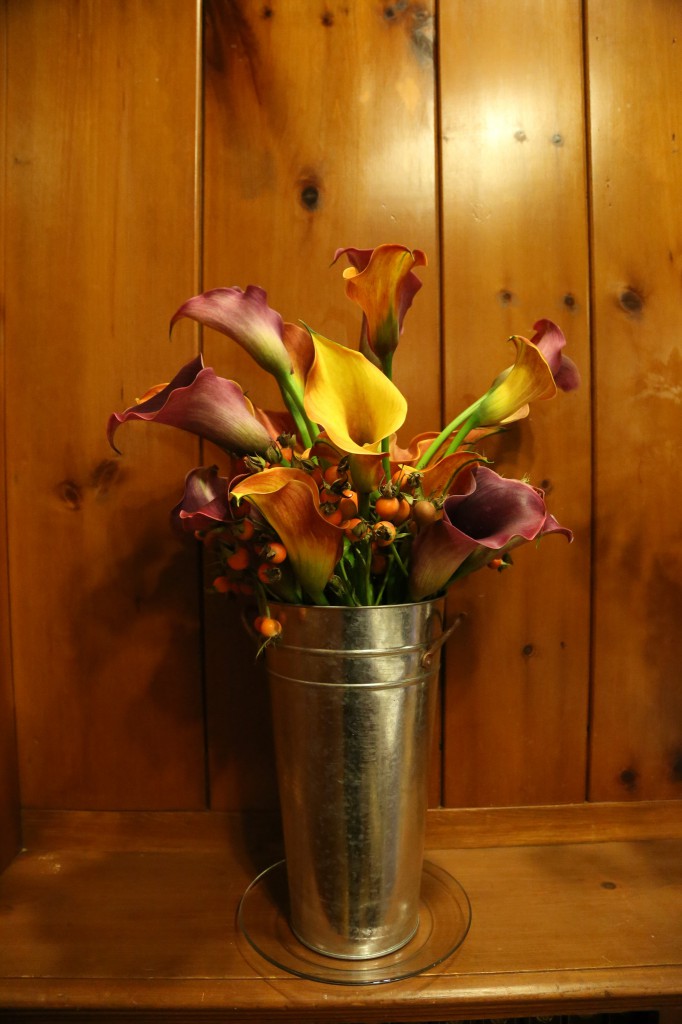 This bouquet represents a fabulous combination of calla lilies and rosehips, from Oregon Floral, designed by Lorene Edwards Forkner 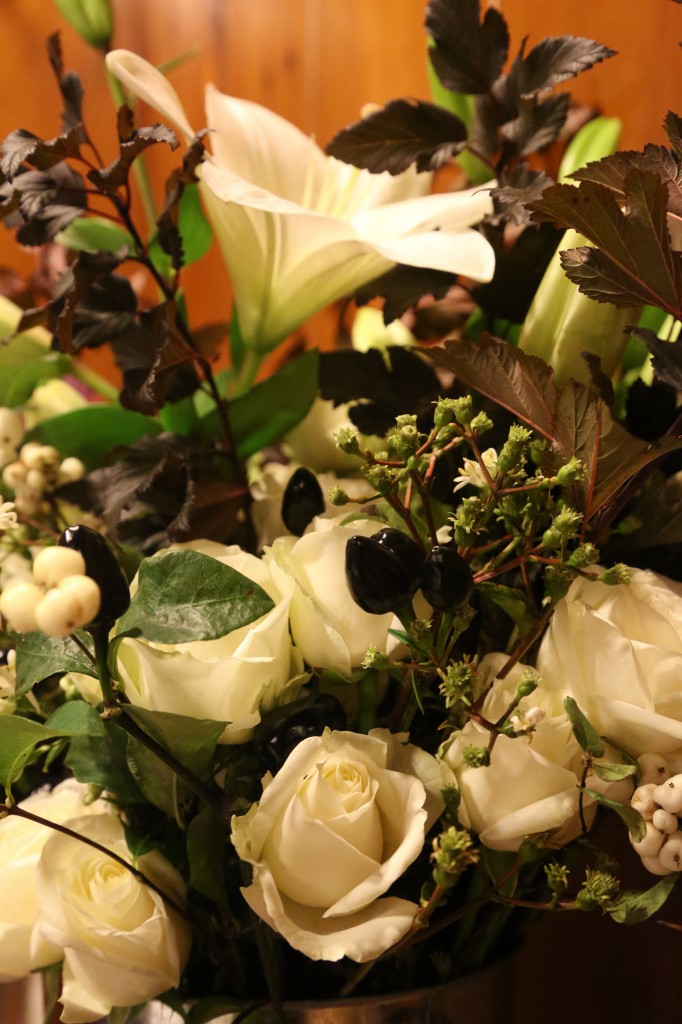 Inspired by flowers that Sandra Laubenthal of Peterkort Roses selected on behalf of the Oregon Flower Growers, this black-and-white bouquet was one of the evening’s most eye-catching. 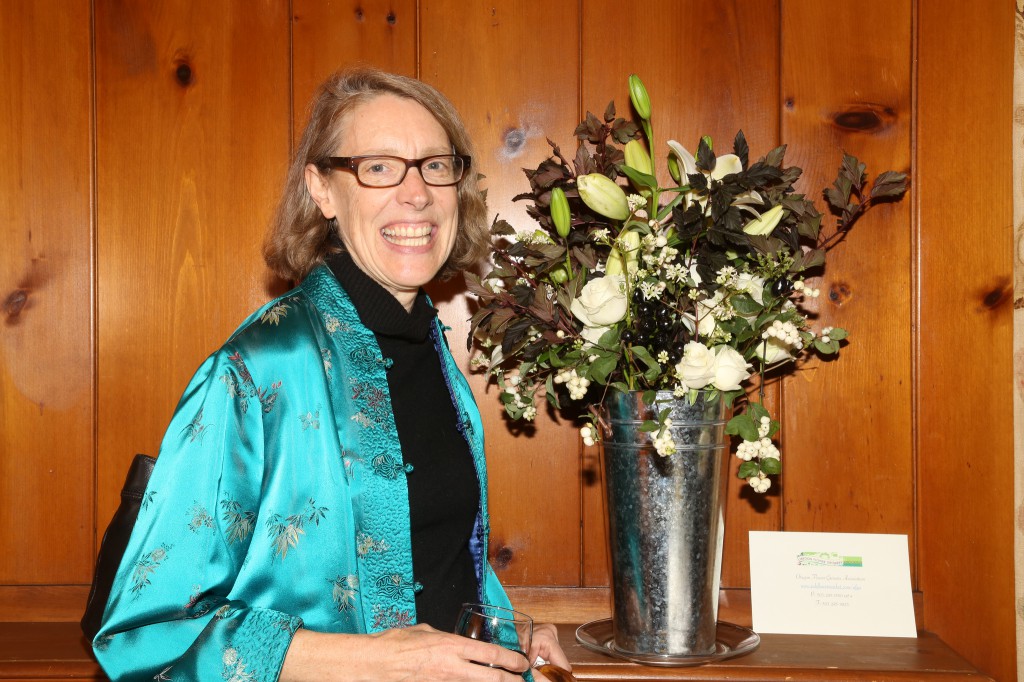 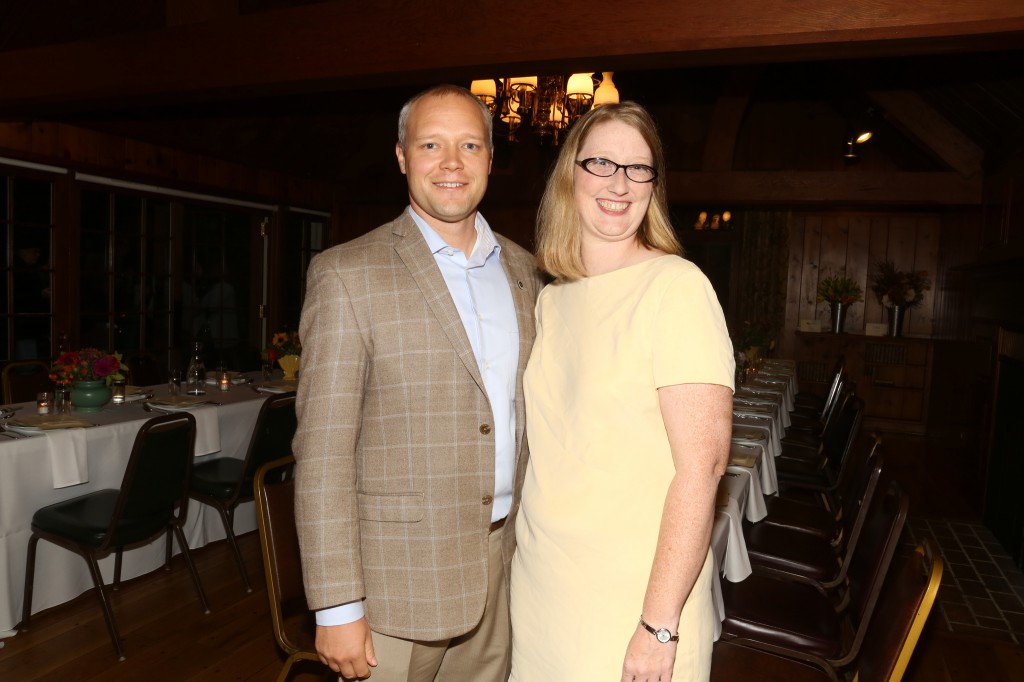 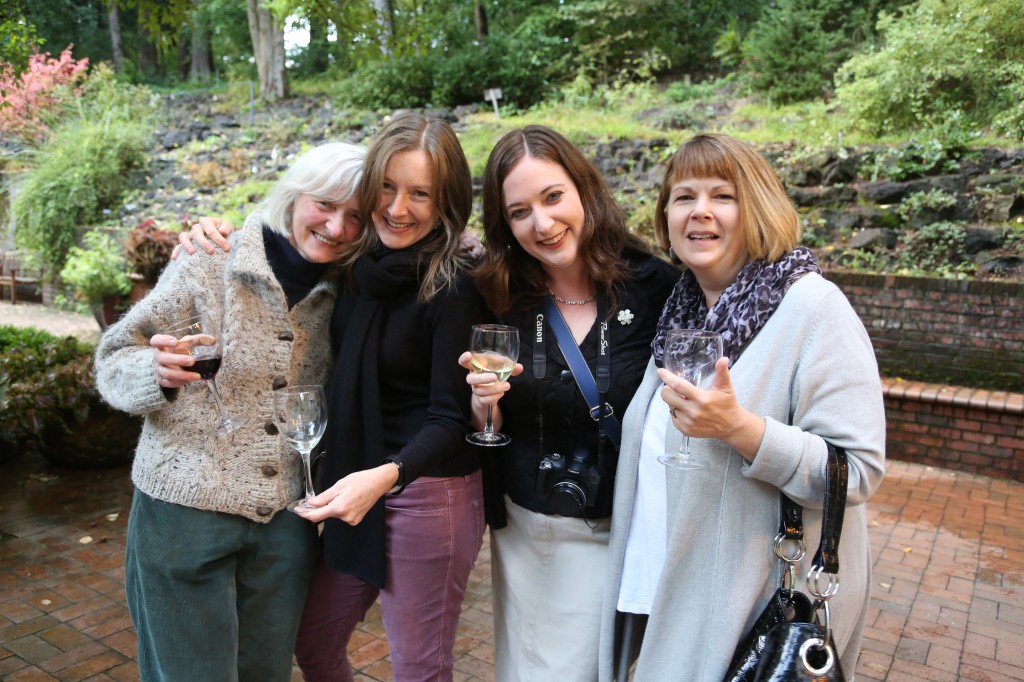 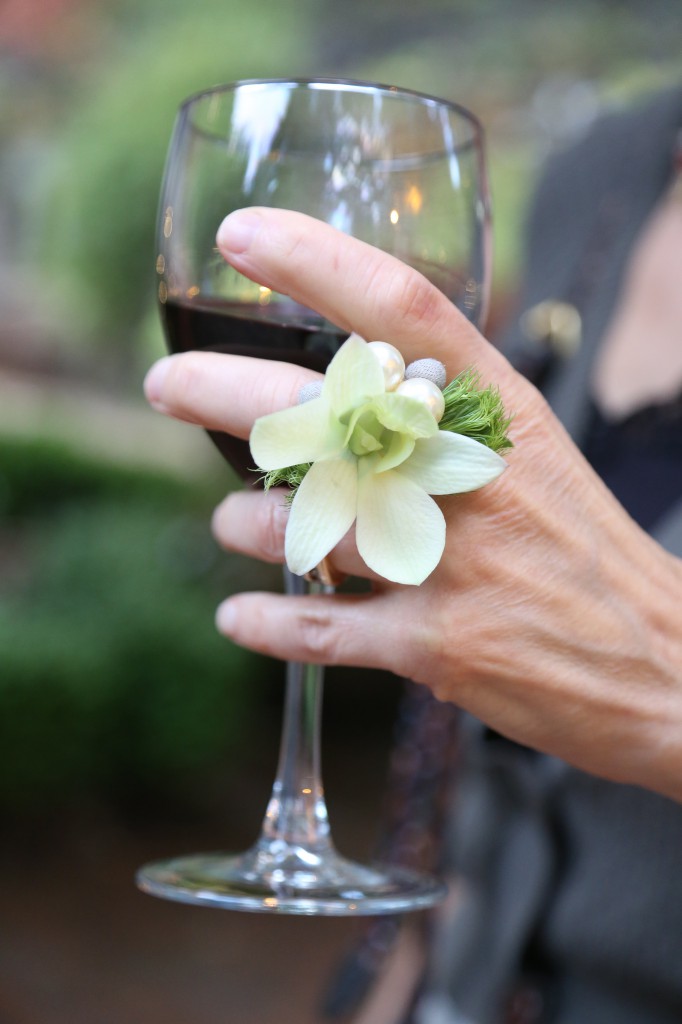 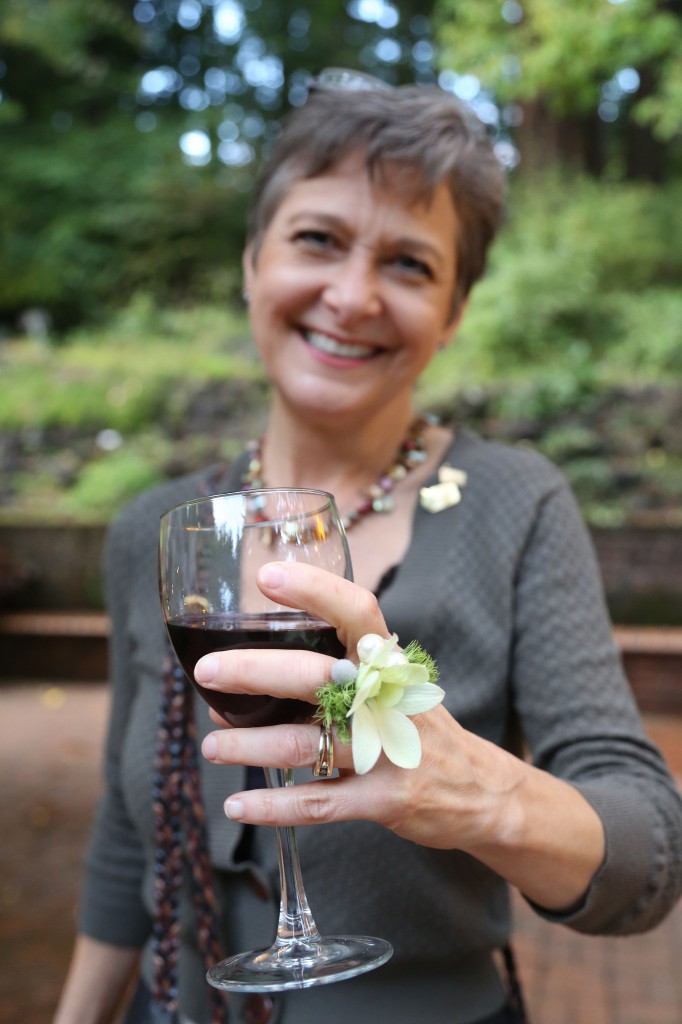 Leanne and her gorgeous blooming ring! 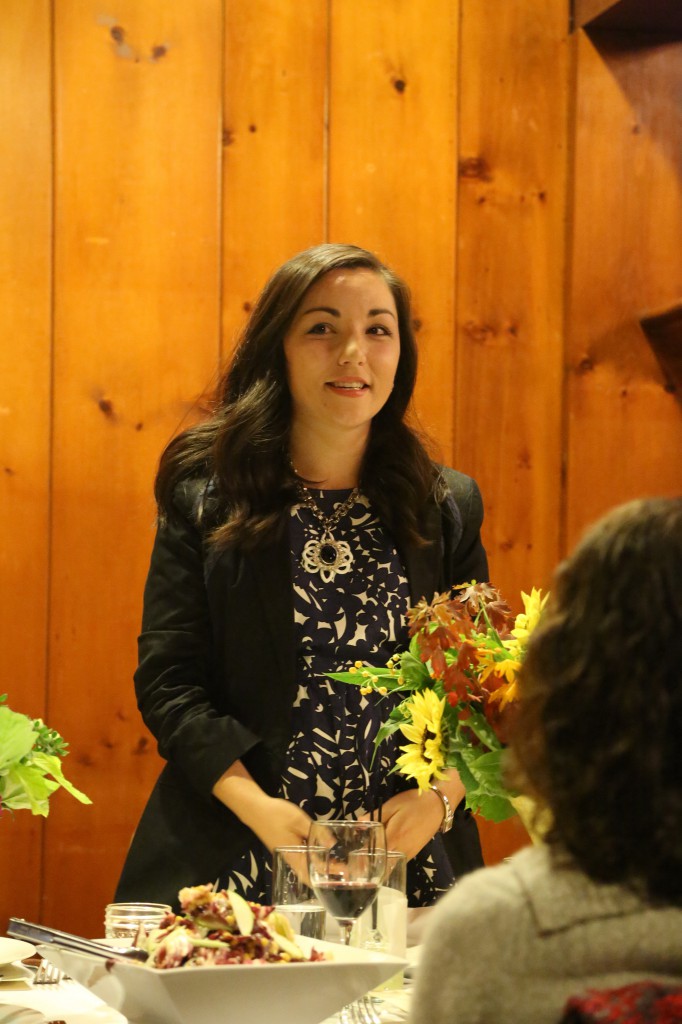 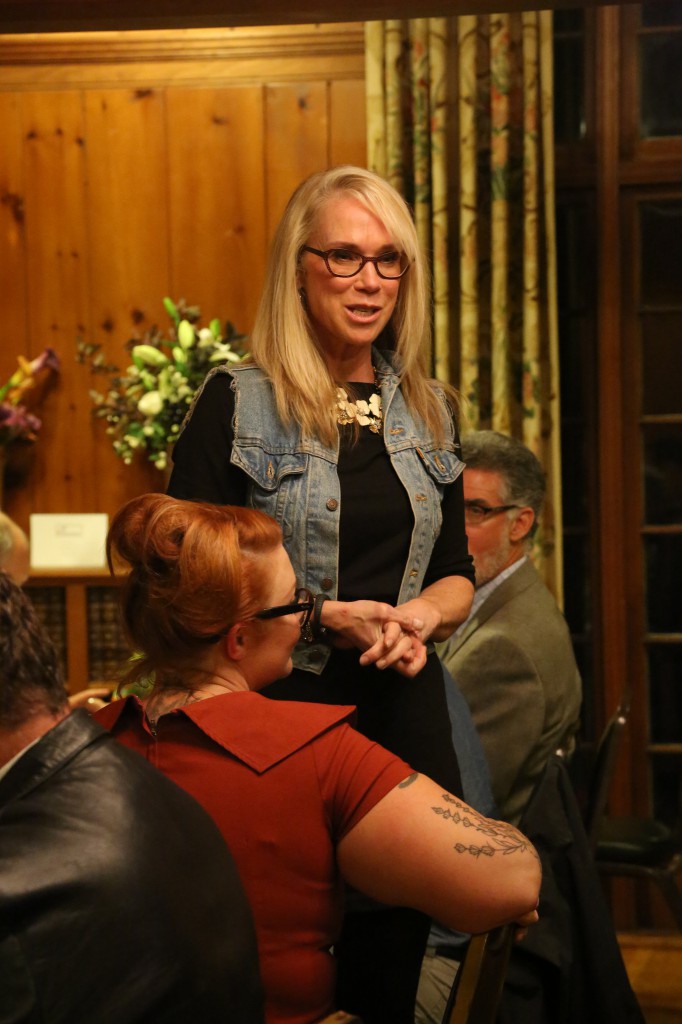 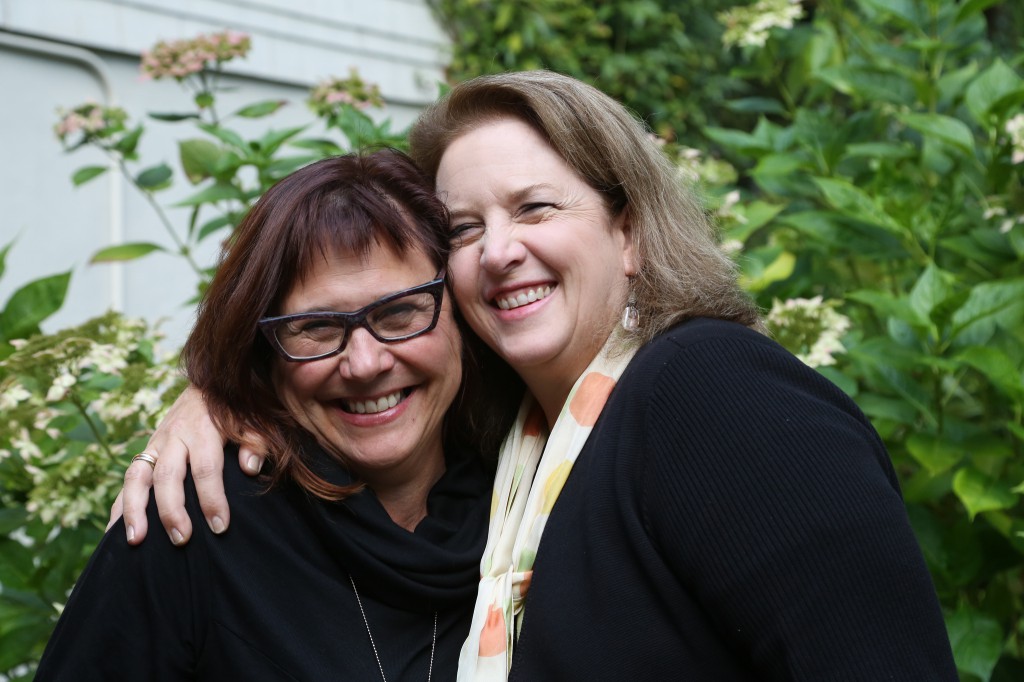 I can’t go anywhere without my co-conspirator Lorene Edwards Forkner. Thank goodness she was there to lend her artistry and compelling point of view to the conversation.

This entry was posted on Sunday, October 20th, 2013 at 10:43 pm and is filed under American Grown, Blog Posts, Creativity, floral design, General. You can follow any responses to this entry through the RSS 2.0 feed. You can leave a response, or trackback from your own site.