There’s a lot of wisdom to be found in the Dining pages of today’s New York Times. Mark Bittman’s “The Flexitarian” column focuses on changing our relationship with meat, learning to eat less and re-thinking our food dollar. 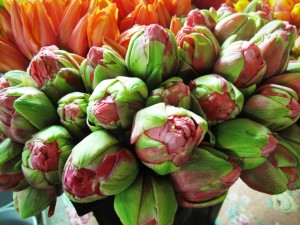 American-grown tulips grown by a farmer I know and trust.

You can basically take the term MEAT and replace it with FLOWERS to come up with a very credible explanation about what America’s flower farmers are up against. You know, that notion recently shared by none other than our nation’s Vice President Joe Biden about how cheap, imported flowers are “good for U.S. consumers.” No, Mr. Vice President, they are not. Cheap anything has a huge price. In the case of flowers, if you believe that cheap flowers are good, that means you aren’t concerned about living wage farm jobs in the U.S., about preserving farm land or about encouraging rural economic development. So there is a price to pay. For food writer Mark Bittman, the story of meat gives me a great analogy for flowers. I’ve taken the liberty of changing his story so you can see what I mean. Read on. . .

I feel best when buying from a farmer or farmer’s representative I know, or think I know. But even assuming this is possible, it has what at first appears to be a decided drawback: cost. It’s difficult to nail down averages, but if commodity meat (FLOWERS) — I’m talking about red meat (ROSES) here, but most of what follows could be argued about almost any product — costs something under $10 a pound (PER DOZEN) in most cases, and national brands from humanely treated animals like that from Niman Ranch or Coleman Natural (DOMESTICALLY PRODUCED FLOWERS) cost maybe twice as much, meat GARDEN ROSES from local farmers costs considerably more. It’s not uncommon to spend $25 or more a pound (A DOZEN) on beef (FLOWERS LIKE ROSES) from a trustworthy DOMESTIC source.

The immediate response that we as consumers have to this is “ouch.” Counterintuitive as it may seem, this is good for everyone.

Relatively large-scale sustainable and “natural” or “organic” or “humane” farmers might raise 500 pigs (UNDER 10 ACRES OF FLOWERS) in a year— they are not getting rich. We want these farmers to earn a living; they are stewarding the land in a manner we appreciate and they are providing us with the kind of food (FLOWERS) we want to eat (ENJOY, GIVE TO LOVED ONES, BRING INTO OUR HOMES); they are not using antibiotics (CHEMICALS) routinely or torturing animals (DAMAGING THE ENVIRONMENT). Nor are they likely to be receiving, directly or indirectly, federal subsidies. And they are providing us with meat (FLOWERS) that tastes better (ARE HEALTHIER, FRESHER, LOCAL AND SUSTAINABLE).

All of which may not make up for spending $30 instead of $15. But there are other reasons you can live with these higher prices.

It’s widely accepted that large quantities of red meat may be problematic, health-wise , and

We know that many people have made it a goal to eat less meat (CONSUME DOMESTIC FLOWERS) because large-scale industrial FACTORY FLOWER production is damaging to the environment. This is to a great extent what flexitarianism BEING A LOCAFLOR is about, after all.

Here’s a way to think about it: The price of food in general is what economists call “inelastic” — you’re going to eat something no matter the cost. But  The price of any particular food like meat (FLOWER)  is elastic — you will buy less as it becomes more expensive. Though it may at first seem paradoxical, this is a good thing from nearly every perspective.

I am saying this: Spend the same $30, or $50 or $100 or $300 on meat FLOWERS that you now spend each week or month, but buy less and buy better. You might compare this to an annual purchase of 20 $5 T-shirts made bychild labor (CHEAP, IMPORTED FLOWERS GROWN BY LOW-COST LABOR) versus one of five $20 T-shirts (BOUQUETS) made by better-paid and better-treated workers from organic cotton AMERICAN FLOWER FARMS. Expensive meat from real farms is a more extreme example of this less-is-better policy.

I hope you can follow where I’m going with this word-play. The takeaway message to me is that American Grown flowers might cost more, but they are higher quality, they will last longer, AND, they are sustaining American flower farms.

This entry was posted on Wednesday, May 29th, 2013 at 1:34 pm and is filed under American Grown, Creativity, floral design, General. You can follow any responses to this entry through the RSS 2.0 feed. You can leave a response, or trackback from your own site.