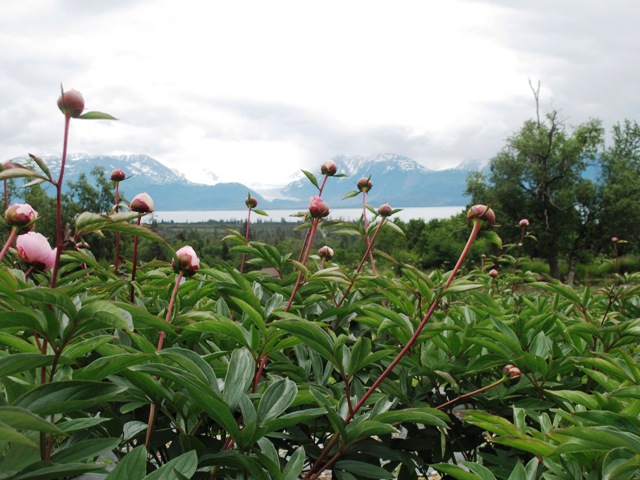 Seriously the most spectacular sight I've ever witnessed: Peony fields in the foreground. . . Glaciers in the distance! Taken at Shelley Rainwater's GLACIER PEONIES in Homer, Alaska

I was lured to Alaska by peonies.

You probably didn’t think it was possible to use the words Peonies and Alaska in the same sentence, but guess what? There are acres and acres of peony fields, flourishing in June and July as far north as Fairbanks (Latitude 64). A little further south, peonies bloom in Homer until August and even early September. The cool thing about this chilly state is that an intrepid group of farmers is making a cut flower industry possible. These flower lovers have seized the opportunity and created a market for their lovely crops at the exact same time when a huge percentage of weddings takes place in the Lower 48. 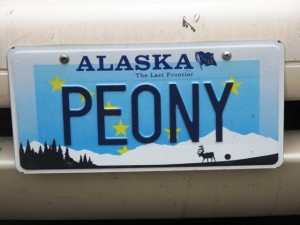 It’s a sweet spot you rarely see these days. After learning about Alaska’s emerging peony scene in 2011, I set my sights on a first-person trip. In late July, I spent one week there, logging more than 1,500 miles on Alaska’s highways and byways (and a few dirt roads to nowhere!), visiting 15 peony farms and meeting with dozens of wonderful people behind the blooms. I came home totally enthralled with the can-do mindset of flower farmers everywhere, especially in Alaska where no one expects you to grow anything except those oversize cabbages that win blue ribbons at the state fair.

Here’s why it’s so exciting:

Peonies are one of the top bridal flowers in the country, according to The Knot and other industry sources. Yet here in the lower 48 states, peonies peak in late May and early June. If you are a bride yearning to hold a bodacious bouquet of peonies on your special day in July, August or September. . . you are simply out of luck. The next chance for peonies comes in the fall, around October, when they bloom on Australia and New Zealand flower farms – and have to be shipped to you at outrageous expense and a serious carbon foot print. 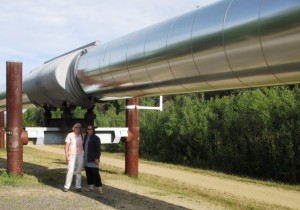 Pat Holloway, left, and me - standing underneath the Alaska Pipeline in Fairbanks. Kinda scary, but I couldn't resist the photo!

So when the folks in Alaska, inspired by the research of Pat Holloway, a professor in the department of high altitude agriculture at U of A/Fairbanks and the Georgeson Botanic Garden, discovered they could grow peonies and harvest them in July and August, well, they literally created a brand-new seasonal flower crop. The marketplace has responded with a voracious appetite for the pale pink, coral, cream, wine and hot pink blooms. Brides and their floral designers are jumping for joy – and Alaska has its first agricultural export crop. Not fish. Not oil. But PEONIES!

This micro-flower story has taken place in less than a decade, gradually at first, as a few folks planted a few hundred peonies on an acre or two. Then, armed with Pat’s research and information gleaned from her workshops on growing and harvesting, more growers joined the movement. Like many perennials, peonies take at least three years to become productive, so it has only been in the last year or two that significant quantities of blooms have been cut and shipped out of state.

The numbers are exploding, though – and an informal statewide survey suggests that about 100,000 stems were shipped this summer. There are about 150 members of the young Alaska Peony Growers Association, with about one-third of them actively growing and marketing their flowers. The rest are just getting started, ordering peony roots by the thousands and patiently tending to the plants until they explode in beauty (and quantity) over the next several seasons.

If you are wondering “what’s so special?” about these flowers, I can only tell you that there’s some kind of fairy dust in the soil, air, sunlight and altitude of Alaska that adds up to robust, healthy and vivid flowers. Some have stems like you’ve never seen before – 30-inches long or more. The foliage is healthy and true green; the petal colors are intense when you want them to be and subtly quiet when that’s preferred (in other words, better than the catalog photos!). These plants are extraordinarily responsive to the 22-hours-of-sunshine in the land of the midnight sun – and the sunlight seems to be that secret ingredient for the flowers’ success. 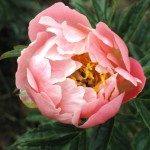 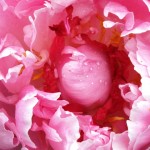 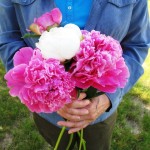 Spring peonies remind me of my Grandpa Prinzing’s peony beds. 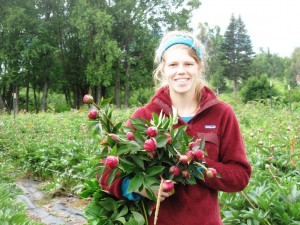 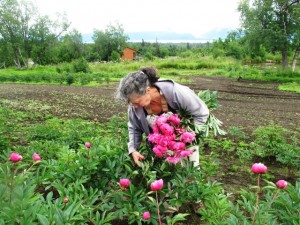 Shelley Rainwater, harvests peonies at her farm in Homer.

There are many ways that these luscious blooms make their way from North Pole, Palmer, Soldotna or Homer to the designers and florists in New York City or Los Angeles (and many places in between). Yes, there is a carbon footprint to shipping peonies on an airplane from Anchorage to the rest of the United States.

But as Pat Holloway pointed out to me:  “For years, I had been saying, Isn’t there something we can stick in a box and ship to someone on all those (empty) planes?” You see, when combined, the international airports in Anchorage and Fairbanks are ranked as the third-largest air cargo transport stop on the globe. The combination of superior cut flowers — available nowhere else on the planet for nearly 10 weeks — and the necessary transportation infrastructure to deliver those flowers to the world adds up to floral magic of a different sort.

The growers typically harvest to order, fulfilling online requests, phone calls from anxious DIY brides, faxes from desperate floral designers — all who have joined the peony gold rush. Alaska has what they need. The flowers are harvested in the cool mornings or late in the day, stored in buckets of water and placed inside coolers large or small. The packaging is thoughtfully done. Stems of peonies “in bud” are swathed in soft quilt batting and arranged carefully in long boxes where there’s space for an ice pack or two. Then off they go, sent overnight so the recipient can enjoy his or her flowers as quickly as 24 hours after they were cut. 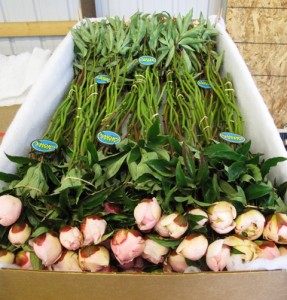 Peonies packed at Midnight Sun Peonies in Soldotna - ready to be shipped. 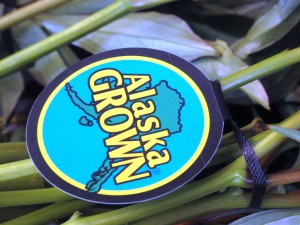 Peonies are pretty remarkable flowers. They can be “dry-stored” after having been cut when in bud (some growers call this the marshmallow stage; others, the cotton ball stage).

Pat’s research has evaluated the relationship between time stored at this stage and the vase life of the blooms once they’re placed in water. You can read some of her research here. One study found that “under optimum conditions, ‘Sarah Bernhardt’ peonies lasted up to 15 days in a vase, 8-9 days from bud break to full bloom, and an additional 5-6 days in full bloom. Chilling is the most important attribute to long vase life.”

Yes, there is an acknowledged carbon footprint associated with shipping Alaska’s peonies to other states. But the energy and expense to do so is significantly lower than the alternative (such as importing from New Zealand or Holland). And to me, here’s the bottom line: It’s exciting to support a new, viable domestic flower industry that’s meeting demand, filling a need, and bringing beauty to the rest of us.

When I was visiting Fairbanks, Pat hosted a barbecue for me to meet several peony farmers in the Fairbanks area. A few local officials came, as well, intrigued to learn about the economic development story under their noses. Later, Pat shared an email one of them had sent to his constituents:

“Two things make Alaska uniquely situated to become the single seasonal source for peonies. First, nowhere else but Alaska can farmers grow crops of peonies that bloom through the summer, especially for late summer weddings. Traditionally, there have been no peonies available for sale between July and September. Second, Anchorage provides critical shipping as the world’s largest handler of international air cargo. These two aspects give Alaska 100% exclusive access to this worldwide market. . . .

“This is just the beginning for growers in Alaska. There is a demand for tens of thousands of stems worldwide and we are in (an) excellent position to develop this outstanding and diversifying product.” 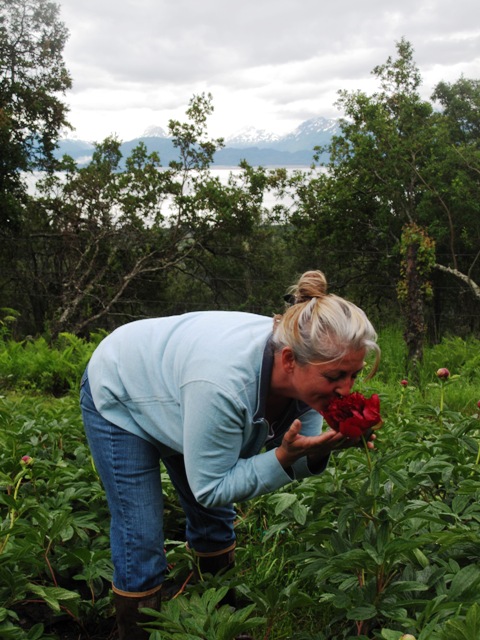 Beth Van Sandt, one of my generous hosts, from Scenic Place Peonies in Homer.

How Can You Find Alaska Peonies? 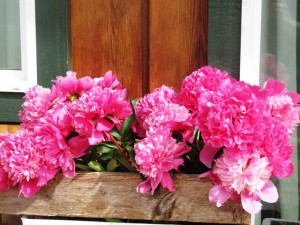 The Alaska Peony Growers Association has a one-stop web site in which you can connect with dozens of growers. Of course, the season is pretty much over, but it’s worth contacting the peony farms to get on their mailing list and ask about pre-ordering peonies for the 2013 season. These farmers are so happy to help you – so excited to know that their flowers are bringing floral beauty to the rest of the country. I encourage designers to make those important contacts now so that next year, when wedding season rolls around, you’ll have access to superior American-grown peonies during the busiest wedding months.

This entry was posted on Tuesday, September 11th, 2012 at 9:22 am and is filed under Creativity, floral design, Gardening, General, Writing. You can follow any responses to this entry through the RSS 2.0 feed. You can leave a response, or trackback from your own site.