How many times has a vase of flowers tipped over in your car? 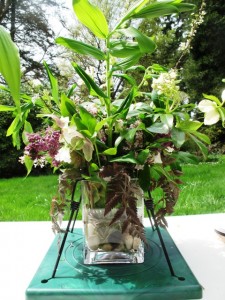 Here’s a clever new way to transport a vase of flowers in the car!

I’ve tried all sorts of tricks to stabilize and transport a gift bouquet in my car. It usually means holding my breath while driving to the party.

Sometimes I place the vase inside a 5-gallon bucket or a large file box and stuff crumpled up newspaper around it. Occasionally, these ideas work out great. Then there are those times when I turn the corner and – oops – everything spills out.

I’m not saying the Vase Brace is perfect, but I sure think it’s a clever idea for transporting a vase, especially on the floor of the passenger’s side or behind the back seat.  Liz Griffin, a budding cut flower farmer from Auburn, brought along this nifty product to the workshop I taught at Seattle’s Dunn Garden on Saturday. 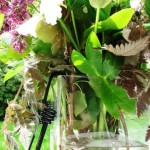 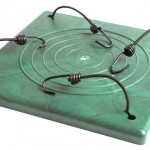 When the class was over, Liz simply placed the sturdy square base on the table and centered her vase on the top. Then she pulled on four bungee cords and snapped their hooks over the rim of her vase. The tension of the cords hold everything in place. No tipping allowed!

I was not the only person to ooh and aah at this clever product. In fact, I snapped a few photos of Liz’s beautiful arrangement secured for transport home in her car.

Today, she sent me the link to an online source called Arranged for you. Check it out – for just under $17, this simple product may make driving to a dinner party nearly stress-free! Thanks Liz!

This entry was posted on Monday, April 30th, 2012 at 5:24 pm and is filed under Creativity, floral design, General. You can follow any responses to this entry through the RSS 2.0 feed. You can leave a response, or trackback from your own site.

12 Responses to “How many times has a vase of flowers tipped over in your car?”