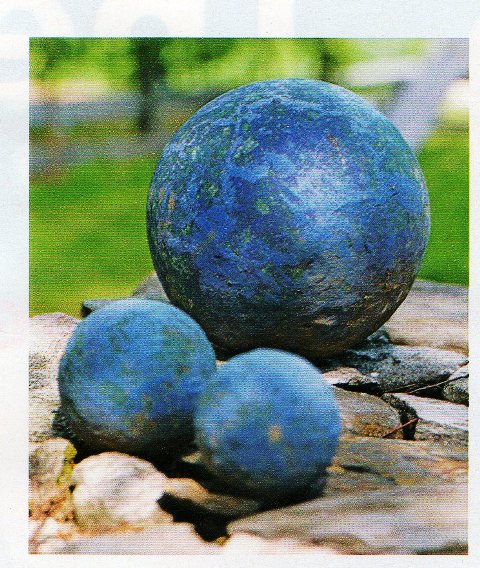 Here's the photo that inspired readers to ask: How do you make these cool orbs? 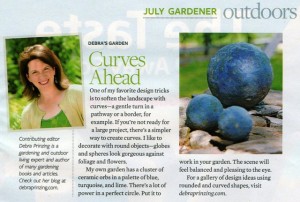 Last summer, I wrote a little piece about using orbs in the garden. Better Homes & Gardens illustrated the words with a photo depicting a trio of concrete spheres that looked like they were stained a denim blue color. Really pretty.

I posted two photo galleries of spherical ideas, emphasizing design principles for using circular and round elements in the landscape, but people still wanted to know how to make those concrete balls!

Fortunately, I found the instructions, posted by Fairegardens, a blog based in Tennessee. Francis of Fairegardens is heading to Seattle this summer to attend the Garden Bloggers Fling, an event that I’m organizing with three other writers, so it will be fun to meet in person!

Frances not only explains how to make these balls (which she first saw done on an HGTV program), she also goes into great detail on the steps, shares a supply list and many photos of the progress.

She calls these Hypertufa balls, but  explains that quikcrete mix can also be used. I hope this gets you motivated to make a big mess for satisfying results!

This entry was posted on Sunday, June 12th, 2011 at 7:04 am and is filed under Creativity, Playfulness. You can follow any responses to this entry through the RSS 2.0 feed. You can leave a response, or trackback from your own site.