A shed that walks 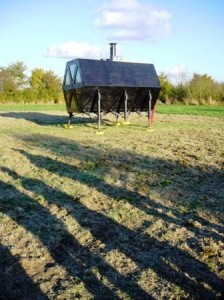 Apparently, the design of this jet-black structure, which looks like a giant, six-sided building-block with “windows” on each end, was inspired by 18th and 19th century Gypsy carriages.

A Danish art collective called N55 created it during a residency at the Wysing Arts Center in Cambridge, England (The Walking House photo is from this web site).

Envisioned as a “high-tech form of nomadic living,” The Walking House measures 60-square-feet. Inside: a bed, a kitchen, a toilet, a shower, and a wood burning stove.

The computer-controlled legs were created by a M.I.T. engineer. You can watch a little video of The Walking House’s snail-like movements here:

There are some pretty funny comments – hundreds of them, actually – on the YouTube post. I’ll paraphrase three that caught my attention:

What about just walking – you could move a lot faster!

Uh-huh. I dunno, it seems like a lot of work to get this behemoth on six legs to s-l-o-w-l-y meander at the speed of 196 feet per hour. 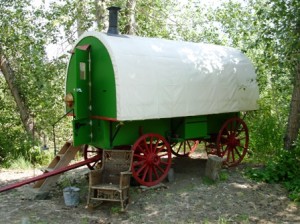 All I know is that the real Gypsy carriage I visited in Sun Valley this past summer seemed quite a bit more sensible – and it has four old-fashioned wheels.

Inside, there is a full-sized bed, a little cooking area, charming lace curtains, and lots of appeal! Imagine sleeping here, with the canvas roof overhead like a big canopy.

Throw open the door and watch nature’s display; or, perch on the steps with a mug o’ coffee and admire the sunrise. Glorious!

This green-and-red Basque sheep wagon was restored by a craftsman named Cotton Riley (how’s that for authentic?) for Cindy Hamlin, a passionate garden designer and friend of Mary Ann Newcomer’s. I felt very lucky that Cindy shared her hideaway-on-wheels with me!

Cindy’s abode may not be high tech, but it’s got a whole lotta character – and I bet it’s more comfy than The Walking House, too. Vive le difference!

This entry was posted on Saturday, November 22nd, 2008 at 11:37 am and is filed under Architecture, Creativity, Playfulness, Sheds & Havens. You can follow any responses to this entry through the RSS 2.0 feed. You can leave a response, or trackback from your own site.

8 Responses to “A shed that walks”