Arts and Crafts architecture, then and now 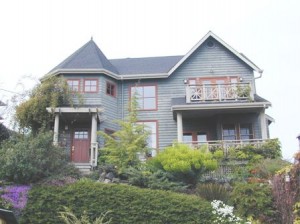 Our beloved Seattle bungalow, updated from its 1924 origins 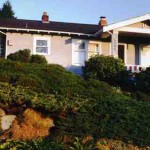 My interest in garden design from the American Arts and Crafts era is connected with the affection we have for a 1924 Seattle Craftsman bungalow, which my husband and I bought in 1996.

The one-story house, about 1,100-square-feet in size, was painted light gray. With faded white trim, it was not much to look at, as it had been a rental house for so many years (seen at right). On our first visit, we ignored the sofa on the front porch (below, left) and instead gazed at the breathtaking views of Lake Washington, the Cascade Mountains, Seward Park and Mount Baker. 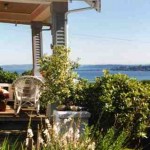 Thus began our love affair with Craftsman architecture. We wanted to expand the house while also preserving its character. My husband Bruce met Toby Taylor of Caledonia Bay Builders after previously seeing his work and tracking him down through a real estate agent

Toby (seen below, right) and Bruce hit it off immediately, an almost unheard of phenomenon between a builder and a potential client who is also a lawyer. Toby introduced us to Robin Abrahams, a Seattle architect who he described admiringly. We were impressed when Toby told us that Robin was “way cool.” 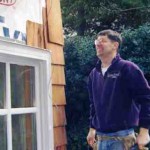 Miraculously, we went with our “gut” feelings and hired them both (this was highly rare for my lawyer-husband, who typically would have insisted on competitive bids from three candidates). We’d heard all the horror stories. Nearly everyone we knew who had restored, renovated or built a home was unenthusiastic about the process, or about their contractor, or about their architect.

But our little project was blessed. We adored Robin and her colleagues at Abrahams Architects. She is a bundle of creative energy, a thoughtful, very smart, incredibly gifted designer. We also loved Toby’s verve, his hard-working, can-do attitude, and his often amusing ski-bum vocabulary. 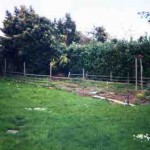 From beginning to end, our design and construction process was pretty successful. Despite our crazy circumstances (I was either very pregnant or towing a 4-1/2-year-old and a newborn with me throughout the entire renovation process), I look back on that time with pure happiness and joy. I learned quickly that one key to staying on schedule was arriving with boxes of pizza and six-packs of beer, which I personally delivered to the job site on Fridays.

Even though the house wasn’t 100 percent completed, we moved in on April 1, 1998. Alex had just turned one; Benjamin would soon celebrate turning six in that chaotic, overgrown backyard (above, left). We had a tie-dye t-shirt party, and hung the children’s finished projects on the laurel hedges to dry in the June sun. 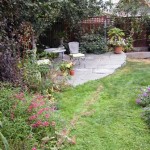 I like to say Mr. Brooks (my husband) built his Dream House.

And then I began creating my Dream Garden. That 8-year-long journey is one that ended in 2006 when we moved to Southern California. We would repeat it again in a heartbeat. It is with happiness that the house and garden moved into the hands of people we know, admire and respect. They are the new stewards of this little place on the map (the image at right is from summer of 2006, before we said good-bye to this home and garden). 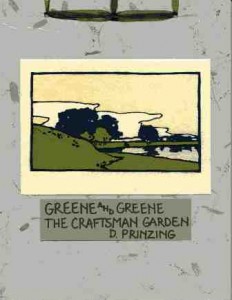 During 2001-02, three years after we completed and moved into our new-old house, I spent a school year studying landscape design with Bud Merrill at South Seattle Community College.

He gave us a fall mid-term assignment on the History of Landscape Design. I chose to research and write about the Craftsman Garden. My topic selection was a very personal one, because I wanted to understand the past and seek inspiration for my own garden’s transformation.

Much has been written about the architecture, interiors and furnishings of the first quarter of the 20th century, thanks to the resurgence of interest, historical societies, and historic preservation efforts.

Less has been documented about the landscapes surrounding the American Bungalow or Cottage. My research led me to articles and books written about brothers Henry Mather Greene and Charles Sumner Greene. They were American originals, architects whose passion and vision helped define an entire movement in design, construction, and decoration of homes. 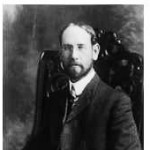 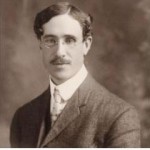 Mary James, Homescapes editor at the San Diego Union-Tribune, recently asked me to write about the new Greene & Greene exhibit that opens this weekend at The Huntington Library, Art Museum and Botanical Garden in San Marino. Called “A New and Native Beauty: The Art and Craft of Greene & Greene,” the show will present the most comprehensive exhibition ever undertaken on the work of Charles and Henry, shown from left to right. My story, “The Legacy of Greene & Greene,” appeared in the Union-Tribune on Sunday.

Before I scheduled my interviews with curators at The Huntington and the famous Gamble House in Pasadena, a Greene & Greene residence that is now an incredible public resource, I pulled out my design report on “The Craftsman Garden” (see cover above). 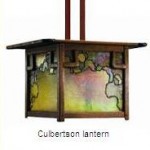 That hand-lettered and ribbon-bound report, from the fall term in 2001, focused mostly on the work of Greene & Greene (shown above). The men were known for designing sophisticated wood-framed residences of the early 1900s through the end of World War I, all but one of which was built in California.

Their work often extended beyond the structure and its interior design to the garden, porch and patio. They drew from aspects of nature, hints of which adorn in everything from stained glass windows to lighting fixtures; from woven carpets to fireplace tiles. Here’s a small excerpt of my report:

Residential gardens of the early 1900s were highly diverse, much as they are today. These gardens were not large; their designs tended to be informal. Beds and walks were not straight, but curved, to emulate nature. Oval or asymmetrical forms suggested an organic rather than mass-produced aesthetic. The gardens were unpretentious and reflected a home’s architecture and surroundings, with an emphasis on native materials, such as stone and timber from local sources.

We wanted to follow the spirit and style of the Craftsman artists and designers as we designed our Seattle garden. Because it was casually created, over time as money and time allowed, it was easy to retain an informal vocabulary in materials and plants alike. Much of the credit for the design, especially the hardscaped elements – stone patio, cedar arbors and trellises, the decks and porches — goes to our talented friend Jean Zaputil, of Jean Zaputil Garden Design in Seattle. Many of the planting choices were ours, as we incorporated specimens from favorite nurseries, plant sales, gifts from friends, and shopping excursions over the years.

Lessons from the Arts & Crafts era can influence anyone who wants their home and garden to reflect a purity of design and a philosophy that values organic materials, the work of artisans and the utilitarian purpose of a home. My education began with my Seattle Craftsman home and garden. Now, I’m learning how to extend that aesthetic to a 1980s-era Spanish-style stucco-and-red-tile-roof residence in suburban Los Angeles.

This entry was posted on Thursday, October 16th, 2008 at 7:11 pm and is filed under Architecture, Creativity, Landscape Design, Writing. You can follow any responses to this entry through the RSS 2.0 feed. You can leave a response, or trackback from your own site.

5 Responses to “Arts and Crafts architecture, then and now”