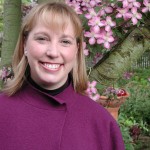 I think many of us have experienced that frequent voice whispering in our ear, offering words of wisdom, advice, encouragement and humor — just when we need them. For me, and for many of her beloved friends, that voice belongs to Linda Plato. “It’s all good,” was one of her favorite sayings. Or, her shorthand version of that phrase: “Good times.”

Garden designer, horticulturist, Anglophile, educator, editor, writer and friend, Linda and her bon mots live in our memories and our hearts. Long before cancer took her young life on December 4, 2005 (at the age of 37), Linda’s witticisms and wry look at the world were a source of humor and happiness to me.

She wrote some of her funniest pieces anonymously as the Garden Curmudgeon for “Garden Notes,” the Northwest Horticultural Society’s quarterly newsletter, for which I was editor. Linda later followed me as editor and continued as the GC, often quoting the OGC (the Original Garden Curmudgeon). It took some people years to figure out that she was GC and her dearest friend Greg Graves was the OGC. The columns are collected on the NHS web site.

I’ve been thinking lately that I wanted to write a “Linda’s on my Mind” piece. And over the July 4th weekend, her husband Bruce Forstall sent me a good reason to. Bruce and several family members and friends have sponsored a memorial park bench to commemorate dear Linda. Located in Kirkland, Wash., not too far from Linda’s former design studio, the classy bench will provide respite and peace to many. The logo on the plaque, a container with a triple-ball topiary, is the one Linda designed for her business cards. Her saying,  “It’s All Good,” also appears. (Photos here: courtesy of Bruce Forstall).

It makes me so happy to know that her friends can visit whenever they want. Perhaps if you go sit there, you’ll hear Linda’s voice in your ear, too.

Here is a link to its location: Heritage Park

Here is a link to photos of the bench and setting, courtesy of Bruce Forstall: Bench photos by Christey Bahn 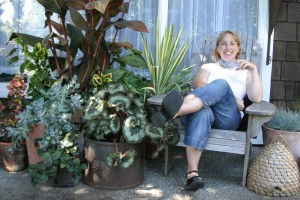 After I read Bruce’s email, in which he commented: “I’m sure there are far too many native plants in the garden for Linda’s taste,” I sent him this reply:

“I can’t wait to visit it . . . and maybe bring a few dwarf boxwood balls and secretly plant them – symmetrically, of course – on either side of the bench.”

His response? “Your comment about secretly planting dwarf boxwoods on either side of the bench is *exactly* what I was thinking when I was writing the original email! Exactly!”

So if you see me with a rental car filled with topiary supplies and a few boxwoods when I’m next in Seattle (perhaps February 2009?), you’ll know that I’m headed up to Kirkland for a little moonlight gardening, in Linda’s memory!

I wrote this piece “Remembering Linda,” for the January 2006 issue of Northwest Garden News:

Linda Plato approved of the two curved hedges of dwarf boxwood growing in my garden. She wished, however, that I might have clipped them into tidy forms, instead of letting them grow freely.

In December 2005, the horticultural community lost Linda to cancer. The owner of Kirkland-based Linda Plato Garden Design & Consulting, Linda was 37. She was married to Bruce Forstall, a software engineer who moonlights as the occasional horticultural photographer and garden tourist. Their fat tomcat, Buster, was their beloved roommate.

In addition to designing amazing European-inspired landscapes, Linda wrote and lectured about gardens. She was awarded a silver medal for her innovative and whimsical display garden at the 2004 Northwest Flower & Garden Show. She called her garden “Urban Fortress,” a name which hinted at her tongue-in-cheek attitude about garden designs and designers that take themselves too seriously (she called those people “haughty-culturists”). Rather than having a garden sanctuary, Linda thought life could sometimes be so crazy that we should protect ourselves with a fortress-like garden (think lots of exotic, thorny plants around the perimeter).

Linda was garden editor for Seattle Homes and Lifestyles magazine, wrote a weekly garden column for the Ballard News-Tribune, and served as editor and contributor for Garden Notes, the newsletter of the Northwest Horticultural Society. Linda was the original coordinator of the Elisabeth C. Miller Botanical Garden’s “Great Plant Picks” program, a directory of plants that grow well in the Pacific Northwest compiled by regional experts. She lectured frequently in the horticultural community and was an instructor at Edmonds Community College. HGTV’s “Gardening by the Yard” featured her in two program segments.

I know that Linda would have hated it if I said something to the effect that she “lost a brave battle with cancer.” Because while this exuberant, funny, creative and caring woman faced the wicked, evil disease head-on, she never let cancer have the upper hand in her life. Linda used her characteristic wit and flippant attitude to stare down cancer and diminish its power over her. She took huge risks and, with her husband Bruce, made unpredictable and inspiring decisions about living with cancer.

When the cancer recurred, in August 2005, Linda started a “blog” called Cancergrrl. She kept a journal of her experiences with cancer treatment, but also shared her honest, humorous take on the disease. She made it easy for her friends to talk with her about cancer, using her disarming humor and irreverence to put others at ease about this scary episode that ultimately took her life.

In July 2005, Linda accompanied her husband, Bruce, on his dream trip to spend two weeks watching the Tour de France, cycling in France and catching glimpses of their hero, cancer survivor and world-class cyclist, Lance Armstrong. It was upon the return of that trip in early August that Linda realized the cancer returned to her body. She started up the blog, writing about the importance that we all send her chocolate. I think her funniest line was: In lieu of sending a donation to your favorite cancer charity, please send Fran’s Dark Gray Salt Caramels to Linda Plato. I’m pretty sure her request single-handedly boosted the sales of that addictive candy last fall.

Linda often wrote about the grand and glorious gardens she visited around globe, including countless visits to play and enjoy the topiary at Disneyland and Disneyworld. “I am not ashamed in the least to admit that I love the horticulture at Disney,” she wrote.

Linda loved to use topiary as a focal point in the garden. She once got herself into trouble with PlantAmnesty by writing an article called “A Gentle Plea for Hedge Trimmers.” In it, Linda pointed out: “Surely there is room in the Northwest for a grown-up’s silly garden, complete with whimsical topiary hippos or giraffes. Laughter is good for the soul, and I believe that we should use whimsy in the garden more often.”

Whenever I see topiary or tour a formal garden, I think of Linda. She inspired me to grow what I love and create a garden that makes me happy. I’m thinking about clipping my boxwood hedges in her honor.

This entry was posted on Monday, July 7th, 2008 at 11:42 am and is filed under Creativity, Gardening, Playfulness, Spiritual Practices, Writing. You can follow any responses to this entry through the RSS 2.0 feed. You can leave a response, or trackback from your own site.