Shedquarters: a basic sense of shelter

“The Shed” is a bimonthly online magazine published by my British shed friend, Alex Johnson. Alex’s Shedworking site is updated daily with news and features about the work-at-home (but in a backyard shed) phenomenon. The site receives more than one thousand hits a day!

This past December, I ran a Q&A with Alex about his popular blog and I learned about his related venture, “The Shed.” In its third year, this mini-magazine has more than 1,500 readers around the world. You can email him at alex.johnson@empathymedia.co.uk to receive a free subscription.

Alex invited Bill Wright and me to be guest contributors to the February 08 issue of “The Shed.” We submitted a piece about one of our favorite shed-makers, Ryan Grey Smith of Seattle-based Modern Shed. Alex’s space was limited, so he had to cut the story it considerably. But just for fun, I want to include the story here in its entirety (below). Bill’s photos illustrate a wonderful backyard escape owned by Irv and Shira Cramer in Berkeley. 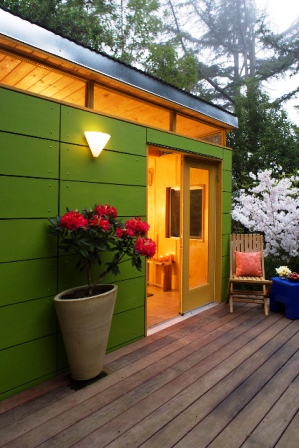 Hillside hideaway: Irv and Shira Cramer originally installed a simple backyard structure to give their teenage children a place to escape. Instead, they appropriated the serene, garden getaway for themselves. [William Wright photo]

Shedquarters: An architect’s own tool shed gets dressed up for his clients’ backyards

Measuring 8-by-6 feet with a starting price tag of around $6,000, Ryan Grey Smith’s Modern Shed is one of the most affordable additions one can make to a house. Except it’s not attached. Smith, a University of Southern California-trained architect who logged years working in the corporate environment, returned to his native

Washington State in 1997. His move was prompted by a chance meeting with the international glass artist Dale Chihuly, another Washington son.

“I ran into him at a lecture and four months later, I was working for Chihuly Studio, running the architecture department,” Smith marvels.

He managed countless Chihuly installations, including “In the Light of Jerusalem” and the “Bridge of Glass” in Tacoma. The job entailed complex layers of project management, lighting design, engineering, site coordination and more.

Designing and installing large-scale installations of Chihuly’s glass sculptures was exciting for the young architect. But after six years, he was ready to work for himself.  In 2003, Smith launched his own architectural firm, Grey Design Studio, continuing the business name that his grandfather Larry Grey, a graphic designer and illustrator, started in the late 1920s. “I wanted to have that family connection in my studio,” says Smith. Much like his mentor Chihuly, Smith blends art and design with a strong entrepreneurial streak. “I started working on local architectural projects, but that expanded to designing furniture and lighting. When I couldn’t find something, I decided to make it myself.”

This problem-solving approach inspired the original shed that Smith created for himself in 2000. He and his wife Ahna Holder, an artist who also trained in architecture, live in an urban Seattle neighborhood. “We don’t have a garage, a basement or an attic and we were struggling with what to do with tools and the lawnmower,”  he says. “We considered something (mass-produced), but those sheds never did much for me. Instead, we wanted something that matched our modern aesthetic.”

Smith designed a 10-by-12 foot box-style structure with a slanted galvanized metal roof, pitched at a 7-degree angle. It had a vinyl tile floor, a single door and an open-air transom around the top. “Originally, I didn’t want any windows, but I gave it a transom opening to allow in light and air for circulation,” he explains. The exterior was finished with 12-inch bands of Hardy board, a concrete-based material that can be painted, attached with exposed fasteners.

Constructed over a few weekends with a limited budget, the shed was “durable, inexpensive and easy-to-build,” Smith says. He set it up in the backyard on deck-style concrete pier footings and filled it with rakes, shovels, paint cans, power tools, the lawnmower, an artificial Christmas tree and the yard waste bin.

A client noticed Smith’s cool shed asked him to upgrade the storage design for a backyard studio. “He worked at home and this offered a great solution,” Smith says. “It solved a space problem for him immediately and he didn’t have to do an addition, which would have been three-times the cost.” It wasn’t hard to convert the tool shed into an office design with the addition of glass in the transom opening, two 30-inch-square crank-windows, and insulated maple plywood walls.

Since then, thanks to interest from editors of design publications and customers who have seen Modern Shed displays at shows like CA Boom, a West coast contemporary art show, the firm has grown from a side venture to a major endeavor, one that Smith juggles with his architecture and product design work. The studio turns out three to four sheds each month, shipping a “kit” containing all the pieces (wall panels, floor, roof, siding, windows, door and assembly instructions) by truck to customers all around the country.

Most clients begin with Modern Shed’s standard design and add custom features, such as French doors, second windows, insulation and paint color. Styles range from children’s play structures and potting sheds to studios and even potential dwelling units (starting at 475 square feet for around $40,000, these are often purchased for vacation property or rental units).

Smith thinks the inherent flexibility of these little buildings has fueled their popularity with artists, writers, musicians, software designers and owners of home-based businesses. “It’s expensive to add onto a house, but these sheds are an easy idea for people to grab onto.”

Functionality aside, Smith acknowledges the emotional attachment people have to a separate backyard structure. “Everyone has a need, whether it’s for a workshop or a getaway. People always connect to the basic sense of shelter, just like when you’re a little kid and you have a playhouse.” 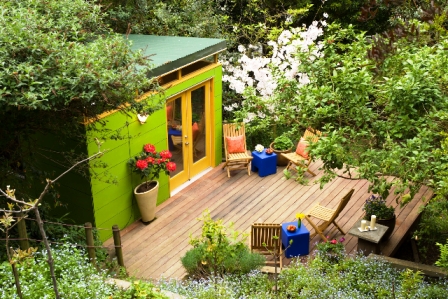 Reached by descending 25 steps to a garden far below their Berkeley home, the Cramers enjoy this separate and soulful place for music, reading, and conversation [William Wright photo]

This entry was posted on Thursday, February 7th, 2008 at 10:42 pm and is filed under Architecture, Creativity, Playfulness, Shed Glossary. You can follow any responses to this entry through the RSS 2.0 feed. You can leave a response, or trackback from your own site.

6 Responses to “Shedquarters: a basic sense of shelter”