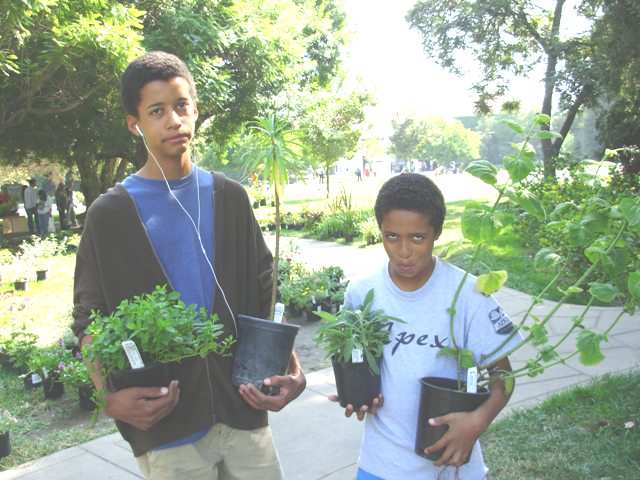 It’s a sunny, 72-degree Sunday in Southern California and I needed to persuade my children to join me for a plant-shopping adventure. How to do it? My destination was the Huntington Botanical Garden’s fall plant sale in Pasadena, only 48 miles away to the east. Living here requires superhuman strategies such as figuring out which of about 200 different freeway routes one can take – and whether the route one chooses is indeed the best (what I really mean is whether the route one chooses allows me to drive more than 30 mph).

Somehow, the promise of shopping at an Apple store, the Gap, and lunch on Pasadena’s hip Colorado Blvd. was adequate enticement. Luckily, we have the essentials for surviving LA’s freeways: snacks, sunglasses, a portable DVD player, iPod, Game Boy (plus NPR and Garrison Keillor for mom).

Then….my children indulged me with 30 minutes at the end of this expedition to swing through the plant sale. I wasn’t too worried about showing up late on a Sunday. In my previous existence, in Seattle, arriving at a plant sale on a Sunday afternoon would only be for the uninitiated. By then, the very BEST plants have all been snatched up by early-bird fanatics on Saturday. I learned years ago about the wisdom of volunteering at plants sales such as Master Gardeners or Northwest Horticultural Society in order to be there in time for first-dibs.

But now, honestly, my “garden” has so far to go that I can’t indulge in panicking about whether or not I’m going to miss out on rare specimens. To put a positive spin on the situation, this garden has incredible potential. We’ve already lived here a year during which I was only able to get my patio containers planted and spend about $500 paying a great worker named Nelson to wheelbarrow away layers and layers of softball-sized red lava rock “mulch” that covered our infertile soil.

While I’m trying to pick out the remaining pieces of lava rock imbedded in the planting beds, and fantasizing about a lavish – dare I say Abundant – garden that will grow here some day (and arguing with the boys who would rather have me yield space to a much-desired trampoline), I’ll be satisfied with a few pots of this and that. Today, I bought a fabulous variegated blue sage (Salvia guaranitica ‘Omaha’), a Euphorbia lambii (Zones 9-11), a silvery spiked cactus-like creature from the Andes named Abromeitiella lorentziana, another cool crassula (‘Coralita’) that I planted in an old green enamel tea kettle previously punctured on the bottom, and two aromatic mint plants — a peppermint (Mentha x piperita ‘Swiss Ricola’) and a spearmint (Mentha spicata var. ‘Mint the Best’).

Here’s what I had in mind for the mints: 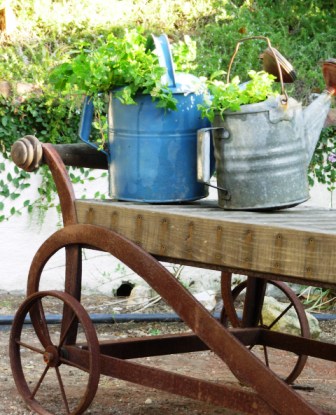 The retro-era galvanized watering cans were given to me by my nongardening friend Stacey Winnick. Stacey is a vintage textiles dealer in New York. She’s the type of loyal, longtime friend willing to take me to the New York Botanic Garden to see the Chihuly exhibit a year ago, even though she’s not really into horticulture.  Stacey’s excellent eye for design saw these cool watering cans at a tag sale or an antique show and she snagged them and later gave them to me. Both cans have traveled home to the West Coast in carry-on bags (on two different trips). When I saw the July 07 issue of Martha Stewart Living magazine, featuring a fantastic just-cut arrangement of flowers spilling out of a rustic watering can, I called Stacey and told her how truly savvy she was – she knew there was something special about those castoff containers!

These cans have been on display in the backyard, but it took a chance encounter to inspire their upgrade into eye-catching containers.  A few weeks ago, I interviewed Bonnie Manion, a San Diego area gardener and antique/collectibles dealer, about her organic vegetable garden. The story will appear in the summer 08 issue of  “Nature’s Garden,” a Better Homes & Gardens publication. Whether scouring her many domestic sources or traveling to the French flea markets, Bonnie is always on the lookout for interesting salvage, antiques and collectibles for the garden. Her company is called “Mon Petit Chou” and you can find her garden bed frames, gates, baskets, vintage containers and more at Chicweed, Cedros Design District, 240 S. Cedros Ave., Solana Beach, California (858) 205-8083.

In looking through the photos that will accompany the story, I noticed bright green leaves of spearmint spilling out of an old watering can. Assuming they were cut herbs, I asked Bonnie how long the mint lasts in water. Oh, she said, that’s a leaky watering can, so I use it as a container and just plant the mint inside. Yeah. Great idea. After  finishing our phone call, I ran outdoors and filled both of Stacey’s watering cans with water. I knew they were weathered and a bit wobbly (the bottoms of each are now convex, as if they were partially filled with water when temperatures hit freezing, which turned to ice, popping out the base). Once filled, the cans both seeped water from the lower edge. Instant drainage!

Home from the plant sale, with my two new mint plants in hand, I planted up Stacey’s watering cans, inspired by Bonnie’s craftiness. I’ll have even more enjoyment from this cheerful composition knowing that I can pinch off bunches of mint for lemonade or ice tea.

This entry was posted on Sunday, October 14th, 2007 at 9:37 pm and is filed under Creativity, Gardening, Playfulness, Shed Glossary. You can follow any responses to this entry through the RSS 2.0 feed. You can leave a response, or trackback from your own site.