Then and now. A study in contrasts teaches me that there are many ways to experience beauty if one is looking closely and accepting of change (especially in myself).

What: a mesh bag filled with King Alfred daffodil bulbs, promising to produce the biggest, gaudiest yellow trumpets I could imagine come spring. A bag of potting soil. A carton of bulb fertilizer. 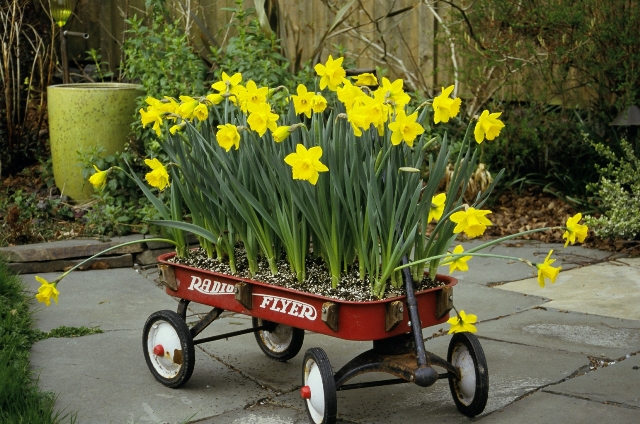 The container: a nearly-discarded “Radio Flyer” red wagon, slightly rusted with lack of use by a boy now into his teens. Mom couldn’t bring herself to abandon those sweet and bittersweet memories of taking walks around her Mount Baker and Seward Park (Seattle) neighborhoods, first with Benjamin, and then little brother Alex, resting on a throne of pillows with hands clinging to the (now rotted away) wood rails. Childhood, pure and simple.

What to do? Get out a hammer and a 6-inch-long pointed spike – not sure why I have one – maybe for mounting a trellis or some other ambitious but unfinished garden project. With hammer, I pierce the bottom of said Radio Flyer, turning the inside into giant sieve for drainage.

The wagon’s depth is about the same as the bulbs…not always recommended, but this was going to be a temporary installation, planted in October; the anticipation of its spring performance teasing me every time I look outside my kitchen window during the rainy months of November, December, January, February…..then March arrives and the primary red wagon takes on a crown of gold daffs. Erect, reaching for the sun, perfect in form and attitude. Hurrah! 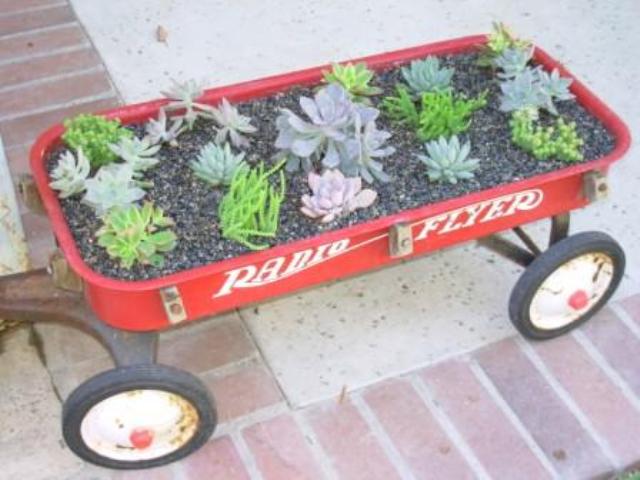 What: Same perforated, slightly rusty red wagon. Now empty, having begged transport with a family’s entire life moved two states away to California. A flat of 4-inch succulents. My new best friends. No more spring bulbs for this girl. Instead, names like Crassula ‘Tom Thumb’, Aeonium ‘Kiwi’ and Pachyveria glauca stare up at me, bone-dry in their plastic pots, but seemingly unbothered by it. In this very different fall setting, I start to plant a succulent tapestry in my Radio Flyer.

The container is the same, of course. The soil mix is different, since I’ve learned from locals to grow succulents in a combination of equal parts of organic potting soil and cactus mix. After filling the wagon with this two-way formula, I arrange my little treasures, playing around with their color and form as I recall my mother’s skill at mixing fabric swatches while quilt-making.

Once these babies are planted, I know they will endure (even appreciate) my forgetfulness. I layered small bits of tumbled rock over the soil to “top-off” the design. My husband asked me why I was carefully sweeping and brushing the pebbles over the top. Is it for drainage? he asks. I don’t really know why. Perhaps I should have just told him: because it pleases me.

I am finding everyday beauty in these unfamiliar plants I once considered a rarity in my former garden.

This entry was posted on Sunday, October 7th, 2007 at 9:45 pm and is filed under Creativity, Gardening, Playfulness. You can follow any responses to this entry through the RSS 2.0 feed. You can leave a response, or trackback from your own site.

One Response to “Then and now”